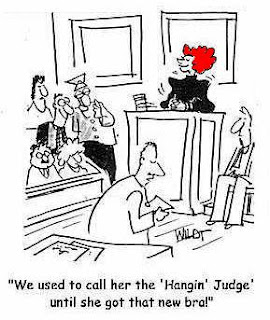 ... if you, a member of the rakyat, should have the misfortune to irritate a judge, that judge can and apparently will fine you a large sum of money, in lieu of which you shall go to prison – and all on the suggestion of your opponent's lawyers.

I refer to the Bernama report on Matthias Chang's committal to prison for contempt of court, and the letter from one of your readers.

I have often found Chang's views to be repulsive and the design of his books to be odious. I should prefer to keep him as far away as possible from myself.

However, my personal preferences have utterly no bearing on the matter of principle he is trying to defend – a fact that seems to elude the majority of both your readers and those of another site.

We gleefully suggest that the warders throw away the key or else we say with so much righteous indignation padan muka or words to that effect: you reap what you sow, and the like. We are quick to condemn him as a fitting sacrifice on the altar of judicial impurity – the same altar we believe he helped desecrate with the blood of better judges and the bitter moans of blind justice prostituted for filthy lucre.

But what do we ourselves become in the process? Do we support the misapplication of judicial power if the subject of abuse is someone we dislike? Someone ugly, perhaps? Does our concept of democracy, justice, and freedom include heroes like Anwar Ibrahim but exclude 'villains' such as Matthias Chang by default?

The point Chang appears to be trying to illustrate is this: if you, a member of the rakyat, should have the misfortune to irritate a judge, that judge can and apparently will fine you a large sum of money, in lieu of which you shall go to prison – and all on the suggestion of your opponent's lawyers.

You have no right to conduct a defence against the judge's claim and your own lawyers have no standing to argue your case.

I have absolutely no idea if what Chang says is true but shouting him down and ignoring the issue simply because we dislike the person who brings it up is the purest form of self-deluding hypocritical idiocy that can possibly spew from the hearts of those who call themselves liberals and democrats.

Does vengeance still taste as sweet? Perhaps it does, as long as we remain free to apply one set of rules to one lot of people, and different set to another – but it would be far better that we should abandon our pretences and don our black shirts and jackboots and cry Sieg Heil'.

By the same token we do not see Matthias Chang voicing out the slightest disdain when the Lingam Case highlighted favouratism meted out to lawyers who fraternise with Judges...

Let's not be selective in giving sympathy....

What do you aspect Joe Black, when the Lingam case was manipulated by Anwar and Zaid/Pak Lah to pin it on Dr Mahathir?

One lawyer I enquired said the Lingam case was so politicised case and in fact, the line of questioning was so chaotic and legally harphazard that they couldnt make a case against TDM.

Why would anyone wants to back the Lingam case when it has ulterior political motive?

Was it NOT mahathir who messed up the judiciary, sacking the judges.

An addendum to your reply as regards the Lingam Case.