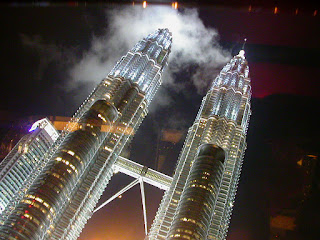 There were two explosive news emanating from Petronas yesterday.

The news are bigger in proportion but similar in impact to last Monday bombing of Zaid Ibrahim's campaign in Hulu Selangor with character attack by bloggers and the jumping out of a close confidante of Anwar, Dr Halili Rahmat from PKR to UMNO.

Strangely, both news was neither pursued nor given frontpage by mainstream media.

One can understand if it is The Sun, which is growing to be an anti-establishment paper and was just sued RM10 million by Ibrahim Ali yesterday for a news report that negatively labelled Perkasa by putting words into the mouth of His Royal Highness Sultan Selangor.

The first news was about the appointment of Sheryll Stothard as General Manager, Corporate Communication of Petronas.

If the opposition made a big deal out of Government seeking public relation advise from APCO, this is like having APCO running the Government's corporate communication function!

The second news was a late evening posting on Dr Mahathir's blog that revealed former Prime Minister Tun Abdullah gave away a US$100 billion oil field to Brunei in exchange for Brunei from further claiming Limbang from Sarawak.

It smells security breach and treason! 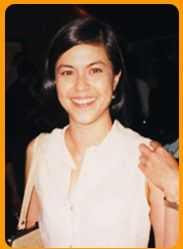 Sheryll Stothard is the former Parti Rakyat Malaysia Vice President, whose party seemed to merge but actually did not with Parti Keadilan Nasional to become Parti Keadilan Rakyat.

How could someone who socialise in the company of leftist like Hishamuddin Rais, liberal Karim Raslan, and sodomist Anwar Ibrahim and have an anti Government stance on Burma, APCET and many other issues be placed at such a sensitive Government position?

When placed in a position between her politics and socialistic ideology and Petronas interest, which way would she take? This is not a risk Petronas should have taken to place such a person who will be the last line before information are made public.

Both the ruling party and PKR have an interest in Petronas. The tradition of maintaining Petronas in the hands of professionals to carryout policies laid out by Government policy maker is to serve such situation by minimising political interferences.

That being the reason this blogger oppose Omar Ong's appointment for it set a new precedent of having an appointee that is close to the corridor of political power placed in GLC i.e. political interference in management of GLC.

One can't helped but to blame Dato Shamsul for the simple reason that Petronas and every other GLCs have a security vetting system in place to check background of staff, particularly for key position.

The ease in the appointment of Sheryll and another Suhaimy Kamaruddin from the questionable online news portal, The Malaysian Insider, proves the vetting system was breached from the top and that is the President's office. 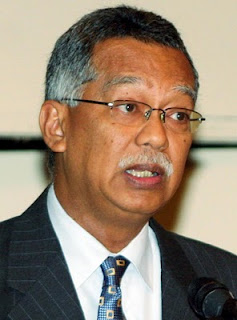 Before Dato Shamsul go on a witchunt on his staff, he should know of what is being talked on the ground.

Since his appointment as Petronas CEO, there have been talk in places like Bangsar Shopping Complex where Mak Datins and Taitais have their tea are offering entrepreneurs help to secure Petronas contracts for a fee.

Such absurd proposals does not end there for my Missus overheard of Mak Datins in health spas boosting of able to talk to their contact which is the Petronas President CEO's wife to help their children apply for positions in Petronas.

It seems as told by Apanama's subsequent posting here that Sheryll got herself in through the kitchen cabinet of Dato Shamsul. Sheryll, it seems is a family friend.

Do they then not know of her political and activism background? In Myanmar where Petronas have an interest and she has an interest in the Anti Burmese liberation movemnt, where would she stand?

Did they check to verify the rumour she was asked to leave next door Maxis?

Before her appointment is endorsed and vetted by the Human Respource Department, she has began to boss people around. As one commentator in Rocky Bru that seemed to be in the know described, she is rude and doesn't respect protocol.

She is in there for only one month and she already see herself fit to shoot her mouth at the previous management under Tan Sri Hasan Merican and making serious allegation accusing Najib of murdering Altantunya.

This is a serious issue of security breach. How could company decision be made by Datin and based on family friendship? Dato Shamsul have to answer for such indiscretion 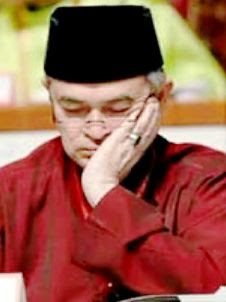 From that incident, Dr Mahathir have revealed yesterday that Abdullah Badawi had made a personal decision to gave away USD100 billion worth of oil concession to Brunei in exchange for Brunei to stop claiming Limbang from Sarawak.

This sounds typical of Pak Lah's simpleton ways to make decision without thinking through the cost and benefit of his decision. One might likely laught it off as another stupid decision by PM FLip Flop Pak Lah.

But this is no laughing matter at all. First and foremost, he cannot be discussing or negotiating sovereign or border issues without bringing Sarawak in the negotiating table.

Secondly, he cannot even is he is the so-called Prime Ministers make a unilateral decision as simple as that. For one, it has to get cabinet approval.

Since it involves sovereignty issue, the Yang Dipertua Negeri Sarawak and Ketua Menteri has to be notified and permission seeked. Most likely it has to be approved by the Exco or Dewan Negeri.

Third, this is no more an issue of negligence but treason. He is not empowered to unilaterally decide on his own to settle Limbang and give away two oil fields which is in the Malaysian borders.

The issue was discussed in the blogs but the mainstream media hushed up the issue.

Recently Tengku Razaleigh also made a remark of Malaysia owning the world's biggest oilfield but was denied by Petronas. True enough, they had correctly denied because Malaysia by Abdullah sole discretion had given away two oil Block to Brunei worth USD100 billion.

Why didn't the then cabinet members or the Foreign Ministry personnel accompanying the Prime Minister intervene and expressed their opposition without fear or favour to PM's simpleton solution to a complex diplomatic negotiation. The Foreign Minister then was the then Dato Seri Syed Hamid Albar.

This is not just any mistake. Giving away any piece of land of Malaysia is a treacherous act. A mere encroachment into our territory will bring out of the millitary and most of us see it honourable to put our life on the line to defend it.

For what Pak Lah did, Malaysian should put our life on the line to prevent it. Pak Lah had done a treacherous act despite so-called of ignorance and naivety. Treason is a serious offense punishable by death!

In the spirit of collective responsibility, the Cabinet have the power to override the then Prime Minister in the ghastly indiscretion. If they do not act upon Abdullah, they will be considered as collaborating.

Kan I dah comment dulu, Shamsul ni is a pussy-man.

Why in the hell, this species like Shamsul is appointed in that position. DS Najib has blundered into appointing a person with no high degree of professionalism and integrity into Petronas. Ds Najib should bear mistake after mistake 1st with Omar Ong and now is in limbo with Shamsul unprofessional attitude. Shouldnt Ds Najib be bold and admit this blundered and rectify it before this thing get worst. The whole rakyat is watching this.