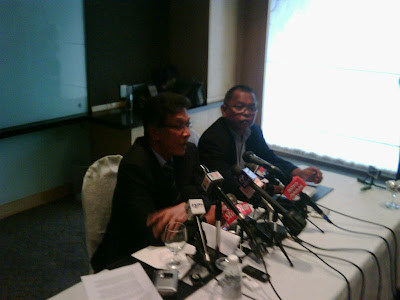 The big news yesterday at Hulu Selangor must be Dr Halili Rahmat's resignation from PKR. Latheefa Koya tried hard to downplay the impact by saying they expected it to happen. Yes ... sure. Try harder.

Halili maybe just a local PKR leader but he is significant for he is a close personal friend Anwar and helped in the formation of parti Keadilan Nasional in 1999.

All said and done, Halili is a major lost to PKR because if he had run as PKR candidate, BN would have wraped up it's campaign early.

In fact there was talk of a last minute attempt to replace Zaid with Halili. That may have broke the camel's back with Halili who has been distancing from PKR for quite sometime if not for Anwar seeking favoor that he run.

With that, one can only envision PKR faltering further. Shamsul Yunos of My Anger blog here envisioned the news below on NST dated March 12, 2013:

Kuala Lumpur, Mar 12 - Parti Keadilan Rakyat spiritual leader, Datuk Seri Anwar Ibrahim said that after five years of cleansing, the party is now absolutely clean of bad people who are not sincere in fighting for the party's founding principles.
He said it was a long hard battle but 'worth it' because the party is now absolutely clean and can now move forward unimpeded by internal detractors.

He held the Press conference at party headquarters in Tropicana Damansara with all three Members of Parliament and State Assemblyman that represents PKR throughout the country, Anwar who is MP for Permatang Pauh, his daughter Nurul Izzah who is Pantai Dalam MP, Party deputy president and Bukit Antarabangsa state assemblyman Shamsidar Taharin and Wan Azizah Ismail, state assemblywoman for Permatang Pasir.

"I am now surrounded by only people that I can trust unconditionally, people who understand that PKR represents justice and fairness," he said.

PKR had called for this Press conference a few hours after the last of the 'bad' people Saifuddin Nasution announced departure from the party citing irreconcilable difference with current party principles.

"In the end even our long standing ally, Saifuddin could not accept that I am the central reason for the party's existence and could not accept our decision to continue challenging the sodomy case brought against me. We are taking it all the way to the international court of justice next week.

Anwar is now awaiting the decision of the Federal Court. He is appealing the confirmation of conviction by the Court of Appeal for the sodomy case.

Anwar's sosdomy case lasted more than four years, thanks to a series of tactical delays that stretched the justice system to the limit.

Asked how PKR will move forward now that it is clean, Anwar said that they will continue with the present course of fighting his sodomy case and keeping alive the dream to become Prime Minister.

"Yes I know that the DAP has vowed never to be associated with PKR anymore after my efforts to take over the country through the back door failed and I know that PAS has forever washed theri hands of me after we nearly lost Islam as the official religion in Parliament last month but these are just political talk.

"I know how to convince them to join me again.

The beleaguered PKR chief was visibly angry when asked if he felt that his friends from Washington had abandoned him in favour of a younger, more charismatic leader.

"Who paid you to ask that question? He shouted repeatedly at the reporter from online news portal, Malaysia Instinct.

Anwar has long denied any links with the Zionists or Jewish lobby but his involvement in many Washington-sponsored organisations continue to haunt him.

Last month it became clear that his friends in America had abandoned him when he was detained on arrival at Washington Dulles International airport.

It is believed that the current leader of the Opposition, a former youth leader had informed tipped off the authorities about Anwar's new links with the North Koreans.

You have to admit....
The fact that he WAITED until the Announcement on the PKR Candidature was made before going public on his leaving PKR (For Whatever the reason he chose to use)
Indicates that his decision to leave PKR HAS a lot to do with him NOT being chosen as THE Candidate for PKR.

He must have waited with bated breath and was totally crushed when his name was not announced!

Due to the above, the DPM's "Gempak" Announcement lost its "Shock and Awe" as the Public is NOT at all shocked and Awed but sees him as a Sore Loser.

You can assue and speculate but you cant confirm.

Last nite he gave his application form with his father witnessing his return to UMNO.

He came from an UMNO family and he decided he had enough.

What is wrong with him contributing back on his first day of return?

His spoken words are source of information and not unsubstantiated speculation.

In case you miss reading my posting, the news spoof is written by Shamsul yunos.

Azmin is perhaps in prison for adulterating with court proof.

Dear Voice,
I find Joe Black's comments revealing.
I wonder how many more of these "PKR Hopefuls" will "Turn Over" when they finally realise they were never any good in the eyes of their Master Blaster.
I guess there is some truth in "Parti Kumpulan Reject"