Block L&M: Blast from the past 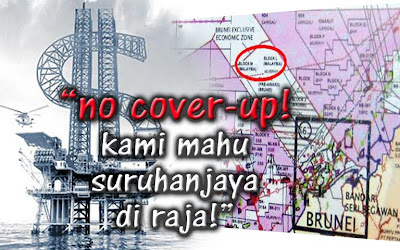 Jebat Must Die put up an article here that refute Brunei has sovereignty over the oil fields block L & M.

The oil block is called in Brunei, Block K & J, perhaps in tribute to the son-in-law that was famously known to advise Fa So La Ti Do .... zzz on all matters, probably including the disputed Limbang-for-Oil Field deal.

There is a July 3rd, 2003 Straits Times article that explained the situation then. Malaysia was almost going to battle with Brunei over the Block L & M and yet Fa So La Ti Do ... zzz could easily gave the oil field away easy.

The proposal calls for a joint-exploration arrangement for the disputed area about 150km off the coast of Sabah. Malaysia is confident of resolving its territorial dispute with Brunei over the ownership of oil-rich waters in the South China Sea.

The regional news magazine, Far Eastern Economic Review, reported in its latest issue that Malaysian officials have proposed a joint-exploration arrangement to Brunei.

The arrangement is similar to the one Malaysia already has with Thailand. 'We have suggested a joint-development-area type solution,' Foreign Minister Syed Hamid Albar told the magazine.

'We have even suggested that after a certain time passes, we will give up more. What we are looking for is a win-win situation,' he added.

The dispute over the oilfield arose after the discovery of oil in the sea some 150km off the coast of Sabah by Malaysia's state-owned oil company, Petronas, in July last year.

The field - dubbed Kikeh - has an estimated recoverable reserve of up to 700 million barrels, or 21 per cent of Malaysia's current oil reserves. At current production levels, Malaysia is expected to run out of oil in 15 years' time.

The Kikeh discovery is large enough to arrest the decline in the country's oil reserves and provide a helpful cushion for the country's economy, according to the Review.

Soon after, Malaysia and Brunei hired prospectors to explore two nearby blocks. Brunei awarded one block to a consortium led by French company Total this year, and is negotiating with a consortium led by Royal Dutch/Shell for the rights to prospect the second.

Meanwhile, Malaysia's Petronas has awarded both blocks to a subsidiary and to Murphy Oil. So what are the reasons for the dispute?

In 2000, Brunei claimed sovereignty over the blocks as part of an 'exclusive economic zone', or EEZ, which stretches 370km from its coastline.

But Malaysia has also long claimed the same area as part of its own EEZ. Analysts say the Kikeh oilfield could extend into the concession that Brunei has awarded to Total.

In March, Brunei sent a gunboat to drive away a Murphy Oil drilling ship from the area. The next month, the Malaysian navy sent several gunboats into the disputed area to block the arrival of a Total ship.

After a tense stand-off involving a single Brunei patrol craft, Total backed off. Both sides have since stopped all work in the disputed areas.

Malaysia’s proposal of joint exploration is similar to the one it has with Thailand in exploring oil in the Gulf of Thailand under a 50-50 profit-sharing arrangement.

According to the Review, Malaysia may use the dispute as leverage to settle other outstanding issues, such as Malaysia's land border with Brunei near the Limbang River, an issue that has persisted for decades.

Dr Tun Dr. Mahathir has promised to resolve the matter before he retires in October.

Meanwhile, energy officials in Kuala Lumpur say the dispute 'should be cleared up in two months'.

Abdullah had kept the detail of the agreeement he made unilaterally with the Sultan of Brunei under wrap, if not for a compulsory announcement by Murphy Oil to their stock exchange below:

US-based Murphy Oil Corporation released a press statement yesterday saying that Petroliam Nasional Bhd (Petronas) has terminated its production sharing contracts of Blocks L and M (referred to as Blocks J and K in Brunei) as the two blocks are no longer part of Malaysia.

“Following the execution of the Exchange of Letters between Malaysia and Brunei on March 16, 2009, the offshore exploration areas designated as Block L and Block M are no longer a part of Malaysia,” the statement added.

Now where is the 50:50 profit sharing arrangement that Tun Dr Mahathir proposed.

Brunei may soon start drilling in Blocks J and K

BRUNEI can start drilling soon in offshore Blocks J and K as the Sultanate retains ownership of the two blocks under a deal made last year with the Malaysian government.

Second Minister of Foreign Affairs and Trade Pehin Orang Kaya Pekerma Dewa Dato Seri Setia Lim Jock Seng during a telephone interview yesterday confirmed this, adding that "this has been sorted out during last year's agreement and is nothing new".

US-based Murphy Oil Corporation released a press statement yesterday saying that Petroliam Nasional Bhd (Petronas) has terminated its production sharing contracts of Blocks L and M (referred to as Blocks J and K in Brunei) as the two blocks are no longer part of Malaysia.

"Following the execution of the Exchange of Letters between Malaysia and Brunei on March 16, 2009, the offshore exploration areas designated as Block L and Block M are no longer a part of Malaysia," the statement added.

"This could be very good news for us if what Murphy Oil writes is correct, Blocks J and K could be under Brunei's sovereign," he said, adding that they are awaiting more developments on the matter.

Grosjean also said that Brunei's Block J was previously commissioned to Murphy Oil under Petronas, but wasn't sure about Block K.

According to the petroleum map from the Brunei's Petroleum Unit, Block K was awarded in 2003 to a consortium made up of Shell Deepwater Borneo, Mitsubishi and ConocoPhilips.

Pehin Dato Lim also noted the recent establishment of a joint technical committee that would finalise the formalities of the boundary demarcation.

The modalities of the final demarcation of land boundaries were included in the Letters of Exchange (LoE), signed by leaders of both countries in March last year. The LoE was intended to settle the long-standing land and maritime boundary issues between the two countries.

Grosjean in a previous interview said that Block J is projected to produce more than 150,000 to 200,000 barrels per day, adding that the magnitude of this growth would mean doubling oil production in Brunei.

"I think we are lucky. I'm very pleased (that Total was) chosen by the Bruneian government to explore Block J initially and we are pleased to have this relationship. Situations where there are disputed areas are not uncommon, especially in the oil industry or related to hydrocarbons. In actual fact, it usually takes a long time to come to a solution and the fact that we are about seven years into this situation, with positive signs of a conclusion this year, is something commendable for the Bruneian and Malaysian governments," he said, adding that working to an agreeable solution is not so common elsewhere in the world.

The Malaysian Embassy in Brunei could not be reached as of press time.

Where is the win-win 50:50 profit sharing? Why for only 40 years only and not till it depletes?