Howl and Cry at the NEM 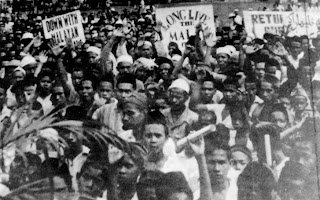 Kongres Ekonomi Bumiputera ended yesterday with Dato Najib consoling those present that the New Economic Model (NEM) is not finalised. It is merely a proposal by National Economic Advisory Council (NEAC) to the Government and is undergoing due consultative process.

He assured that the Bumiputera’s economic interest and affirmative action would not be sacrificed but remain. If that had been so, the red covered document of the NEAC should not be presented with a Government emblem.

The evening crowd of the event organized by the Majlis Perundingan Melayu (Malay Consultative Council) was a tamer one than those attending the morning session. The crowd were smaller but were capable of beheading NEAC Chairman, Tan Sri Amirsham Abdul Aziz on a guillotine.

Amirsham was exposed as inadequate in his role as Chairman. His remarks were found to be parroting, indicating he has no independent thought and not analytical enough. [Didn’t this blogger, who used to work under Amirsham, forewarned that he knows nuts on economics, let alone economic planning and far from doing economic modelling?]

Prof Dr Norma Mansor, Secretary of the NEAC came unprepared for the topic was asked to answer or end her presentation. Most of the attendee had heard the NEM briefing repeatedly and were seriously posing her to answer the topic: Memperkasakan Ekonomi Bumiputera.

During the review by Senator Dato Akbar Ali, the crowd was howling and hurling insults at Norma and NEAC for every agreed point presented. (Presentation available here) The NEAC was exposed to have made serious theoretical error, and ill- intentions to ridicule NEP and smear the era of Tun Dr Mahathir.

Amirsham, another former recipient of NEP just like Tan Sri Khalid Ibrahim, was quoted below:

In one private engagement between Tan Sri Amirsham Aziz - the so-called Malay Chairman of the NEAC but allowed minority and foreigners to overwhelmed the NEAC Membership, he said that New Economic Policy (NEP) was the reason that Malaysia lost it's competitiveness.

Amirsham was not thinking independently and analytical in his Chairmanship of NEAC for his is regurgitating the views of others. Using that stand on NEP, NEAC proposed the New Economic Model to the Government.”

Dato Akbar exposed another fallacy of NEAC from the remark of Dato Najib’s adviser, Dato Dr Mahani below:

“The emphasis should be on opportunities and processes because it is difficult to guarantee outcomes.” – Datuk Dr Mahani

What do expect from a Chairman who knows nuts and was placed there to serve the corrupt and multibillion Ringgit loser, Tan Sri Nor Mohamad Yakcop and the agenda of Kalimullah?

Dato Halipah Esa, former Director general of EPU burst to tears several time in her presentation to review the NEAC proposal. (Presentation available here) She went at length to expose how NEAC totally ignored the plight of the Bumiputera majority. It must have been unbearable for her to foresee the terrible implication.

Unlike the stereotyping and perception played by scrupulous Malay liberals and non-Bumiputera at such groups, they were equally sharpened vocal in the resolution session towards culprit politicians or corporate businessmen responsible for leakage of the NEP.

The name of Petronas director’s Omar Ong and Dato Shamsul Azhar was loudly mentioned publicly for instrumentally destroying Petronas as a successful Malay organization and hurriedly dismantling it to for easy entry to “Chinese” without due process.

This crowd means business and by the look of things, they are not the usual timid and pembodek UMNO crowd one usually see. This is the real fighting UMNO and they are capable of making or breaking UMNO.

This will be more significant with Malay patience now reaching its brink after Government have been kow towing to Chinese demands for the sake of votes but was not delivered and yet the Bumiputera majority voters are taken for granted.

This is only the beginning. Many UMNO leaders like Nazri Aziz are still lost in their ego for not taking this crowd seriously. Let they be warned for forsaking them come with its own peril. You are hereby warned!
at 5/30/2010 06:20:00 PM

are we looking at malays getting out of their slumber....the sooner the better...nanti takde apa yang tinggal......

Another trial and error process?

you and those who attend and give harsh remark are also be warned that you are not invited again in the next round and probably will take those other UMNO people who like to suck up to the government.

Anyways,
Kudos to you for bringing the story.

Tqvm for giving prominance to my comments about the wicked NEM. Hence, I passionately believe in what I wrote in the 'Conclusion'.

For those who might read my slides but did not attend the congress, allow me to explain that those tables and charts (except on PNB) were meant to dispute NEM and conversely prove that the govt / NEP were successful / better in many areas. Nevertheless, the weaknesses in implementation must be effectively addressed.

The quotation about the private engagement with TS Amirsham ought to be rightly attributed to your blog. My humble apology for the oversight.

The economy of Malaysia was at its high during the implementation of NEP. So there is no issue about NEP hindering economic growth.

What happen now is that our economy growth has been hampered by non-functioning public institution. Judiciary, corruption, education, security, civil servants, public transport etc. Just reform all these you will see the economy growing again without at NEP expenses.

NEP is still needed. No question about it. But again the implementation can be better. Now we can see only some selected fews or more specifically those who already rich and even Dato's. We should reform it so that the target area of NEP that is the real Malays on the street can get a hold on it.

One of the (blogger's) Poll conducted regarding NEM & DEB

Why only now the Hew and Cry?!!

Were the relevent people not consulted when NEM was formulated??

Wah so many comments...