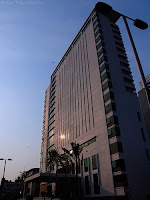 Since arrival Thursday afternoon, this blogger have been spending many hours till late last night meeting up with local contacts to get a feel for the politics here. So I decided to get a bit more sleep this morning. Anyway, I usually give nomination a miss. It's relevance is grossly over rated.

From the reports received, the BN contigent escorting SUPP candidate, Robert Lau Jr to nomination numbered at 2,000. While DAP Chairman and ADUN for Terasek, Wong Ho Leng is accompanied by only a modest 250 with few Pakatan leaders from Semenanjung, including PAS.

Will that difference in numbers matter? Unlike in Semenanjung where the number present on nomination day is indicative of the strength of campaign machinery, it is of no relevence in Sibu or generally Sarawak politics.

To describe the atmosphere here further, not a single poster is seen about town, except at the party operational headquarters, this morning. PBB had only launched their campaign machinery last night on the eve of nomination day. The hall where they had the occasion at Kg Hilir was still barren yesterday morning.

The politics here is not as intense as in by elections in Semenanjung. The level of preparation and state of readiness is minimal. It will be the conjuring act near the end of the campaign that have most impact in turning the outcome.

National issues will be raised by the politicians speaking from Kuala Lumpur, particularly from Pakatan Rakyat but it is the local issues that will determine the winner.

The winner in this three cornered between BN, DAP and a Malay Independent in a BN stronghold is not determined by the issues but the balancing act of meeting the demand, protecting the interest and the politics within the BN side of the predominantly Foochow Chinese (67.6%), Malay (17.1%) and Iban (14.9%) community.

The question is as good as whether BN will win or lose. And that question can only be answered by the Chief Minister, Tan Sri Taib Mahmud who is in the position to answer and address the local grouses.

Even the Federal Government needs the State Government commitment before it could commit to play the development campaign.

The local grouses are plenty and some have been there for sometime. The local favourite grouse is the perennial flood problem. The problem is such that it affects the structure of homes, roads etc.

A bigger issue is NCR land or Native Customary Rights land. The Malays and Iban community have an issue with the father to the candidate Robert Lau. He is taukeh or taiko of KTS Group, a timber-based local conglomorate.

KTS helped the late Robert Lau in the development of Sibu Town into its beautiful skyline today. But the man shrewedly tookover Malay NCR land at Kampung Datuk in Sibu Town without due compensations.

There is another allegation involving Iban NCR land. The Iban is sore to the point of willing to "kasi potong kepala".

There is the local legend of the man's stinginess. It is said that he demanded payment from local Ibans seeking use of his sawmill's rejected woods for funeral use.

It does not help that Robert Lau Jr, nephew to the late Robert Lau does not speak Malay well and lacks the warmth personality of a politician.

There is also the service record of few ADUNs, primarily ADUN Nangka of Sibu to contend with. He has not came down to visit his constituency and fulfill campaign promises. Voters could use this opportunity to teach BN a lesson.

All these issues and problems within the two minority communities can be handled and addressed with the right political attitude and will. The more complex issue is within the Chinese community, in particular SUPP.

Sarawak Chinese politics are clannish and it is no difference in Sibu. CAndidates is determined locally and even Deputy CM, George Chan can't interfere. Let alone National BN leader. That explains the selection of Robert Lau Jr as candidate.

Despite Sibu being considered as one of four "autonomous political territory", there exist rivalry within SUPP Sibu between the clans of Lau, Teong, and Wong. At it's worse, that rivalry could end up into campaign sabotage.

There is a view that the Chinese community wish to tap the wrist of the State Government. It is not so much to follow the trend in Hulu Selangor but for repeatedly failing in their campaign promises and address local woes.

In all these issues, problems and rivalry, this is where the astute and some described as shrewd political hands of Tan Sri Taib Mahmud comes in.

Things are not looking good. It is not because BN is up against an aggresive Pakatan Rakyat and PAS is making their presence here with an office in Kampung Hilir, few yeards from PBB headquarter, but the internal problem and multitude of issues.

By Semananjung standard, the campaign machinery is slow to start and seemed too laid back. However this is not Semenanjung.

Pakatan Rakyat's with their aggresive style and national issue ceramah may not be acceptable in Sibu. It is heard PAS is sending a big team and we know well how PAS works. DAP Perak lead by Ngeh Koo Ham is trying to penetrate the churches and will intriduce PAS into East Malaysian politics.

At the end of it, Sarawak is BN's fixed deposit and loyalty is an important factor. BN will eventually pull through for Robert Lau Jr. DAP realised it because their slogan change and making history.

With the most important part of the campaign still far, we shall await for everything to fall in place.

chinese racist are not good actors

Hoi Vooiz..zzz? not M'night, wake up and give us another Take-away!:)