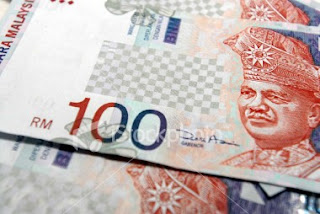 While browsing the news through my Blackberry and awaiting my flight this morning, I stumbled upon a Bernama news quoting Dato Shahrir Samad and Dato Dr Noraesah supporting the idea of a stronger ringgit.

Until I am finally settled somewhere, my quick take on these views is a luncheon speech by YBM Tengku Tan Sri Razaleigh Hamzah on January 15th 2009 at at the ASLI's 11th Malaysia Strategic Outlook Conference 2009.

Ku Li recomended the same measure to expediate the process to a higher income model. His speech is available here.

Unlike the conventional thinking of investment in productivity to achieve higher income model, Ku Li's suggestion appeals to this blogger for strengthening the ringgit has the ability to force our low income thinking producers, manufacturer, and exporters to think within the more productive high income model.

Looking at the attitude of our manufacturer, exporter, and producers, unless force to, they woudl prefer to live by the low income model even if at teh detriment to local employment. They would prefer to hire Banglas, Indons, etc, then invest into process, equipment, and etc.

That's all for the time being. The Bernama report below:


KUALA LUMPUR, May 5 (Bernama) -- Malaysia should aim for a stronger ringgit in line with its ambition to be a high-income nation as there are compelling reasons for this uptrend, former Cabinet minister Datuk Seri Utama Shahrir Samad said Wednesday.

This, together with the New Economic Model (NEM), was timely and would give Malaysia a shot-in-the-arm to remain competitive, he said.

According to her, a strong reason for the recovery is the RM67 billion stimulus package injected into the economy last year which is still filtering its way down.

Extolling the virtues of a stronger ringgit, Shahrir said this would encourage the import of capital goods, which would help contribute to innovation and the automation of industries in the country.

Shahrir said a stronger ringgit would also make travelling abroad more affordable for Malaysians and this would enhance their leisure time.

"Above all, a stronger ringgit will help improve the living standards of the people by increasing their purchasing power through cheaper imports and lower inflationary pressure," he said.

The ringgit is now hovering at a two-year high against the US dollar at 3.19 compared with 3.42 at the start of the year and last year's peak of 3.72 recorded in March.

With the strengthening of the ringgit, Malaysians can also look forward to improved export receipts that will create more employment opportunities among the small and medium enterprises.

The multiplier effects are beginning to take root in a building boom across the country, according to analysts.

Dr Norraesah, who is also an Umno supreme council member, said: "There is more money in the economy. The stability of the economy has led to rising consumer confidence and increased domestic spending.

"What this means is that there are more jobs, higher spending power and greater potential for growth."

Both local and foreign analysts have been saying that the Malaysian economy is enjoying a strong recovery, with growth this year likely to overshoot most predictions.

Some foreign analysts are even predicting growth of 8.0 per cent this year.

Singapore's DBS Bank has raised its growth forecast for the Malaysian economy to 8.0 per cent from 5.7 per cent previously, expecting the strongest full-year growth since 1996.

The DBS report joins a slew of others from securities houses that had forecast Malaysia could register growth of over 7.0 per cent this year.

The most bullish among local securities houses is AmResearch at 8.0 per cent.

Danny Quah, London School of Economics and Political Science (LSE) economics professor, had stressed the importance of the NEM, saying that despite Malaysia being one of only 13 countries to achieve an annual growth of over 7.0 per cent in the last 25 years, the country has yet to fall within the high-income group of countries.

"Without the NEM, we will be overtaken by our competitors such as Vietnam and Indonesia, and Malaysia will fall within the bottom-income group of countries," he told a talk over the weekend.

Prof Quah praised the prime minister for implementing the NEM, adding that "I am impressed with the political leadership over its needs for strategic reform initiatives and the acknowledgement that change is needed.

"The prime minister is constantly talking about how the market needs to be merit-based and the need for more transparency," said Prof Quah, who also sits on Malaysia's National Economic Advisory Council.

Thank you for posting this article from Bernama.

Still uncertain whether the benefits of strengthening of RM really outweigh the downsides.

Quick thought is impact to manufacturing sectors which still employ tenth of thousands of workers. Are they still able to compete with our regional neighbours such as Vietnam, Thailand and Indonesia in term of production cost? China is resisting the attempt to revalue their Yuan because of this concern.

We can agree if at this time the Government to do strategic spending to boast domestic products for exports at the same time creating local job opportunities. Reducing external debts and borrowing should also be emphasize. But I could not agree with the former Minister to encourage consumer spending overseas for leisure in light on current situation.

Malaysia should be on guard of possible contagion effect in light of the European Currency Crisis. After all what it takes rating agency such as Moody’s to down grade country’s credit rating as what happen to Greece, Portugal and Spain to cause economic chaos as what is happening now.

I only hope 1998 financial crisis experience should have taught us well to be extremely prudent.

Salam Voice,
My worry is that this strengthening of the RM is NOT based on fundamentals but rather relates to the influx of "hot money" into our security markets. We can see the warming speculative trends in the property markets now... my worry is we are pumping up the economy using "hot air" to look good for the upcoming GE, Najib's KPI, etc., BUT at what price? If we are not careful, history will repeat itself and this time around we may not be able to see the daylight!!