Are Anwar's other lawyers not good enough? 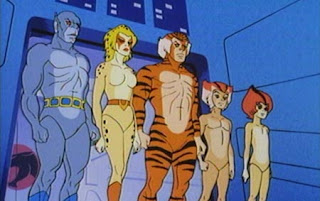 Nah ... they are no Thundercat, But Tunda Cat
Words are Karpal Singh is down with penumonia or some lung infection. He was hospitalised at the University Hospital for a few days. This was picked up in the blog The Unspinners last Friday.

Since delaying court proceeding is the mainstay of Anwar's legal strategy, obviously Anwar is considering to use this as an excuse for adjournament. As it is, with court already delayed from beginning on the scheduled July 12th to July 19th.

The Unspinners claimed that Dato Param Cumarasamy advised them to secure a Medical Cert for a week's leave.

If sucessful, the scheduled 14th to 23rd July trial would pass by without a single day of trial. It is already the 16th day of trial and yet only two of the Prosecutor's witness called in.

The court should reject this request for adjournment because Anwar is being defended by a team of distinguished and experianced lawyers, including several trial lawyers involved in the first case in 1998 and anyone lawyer can relieve Karpal.

The judge should stop allowing Anwar from making a mockery of the court process with constant delays.

It is a bit more than two years from Anwar's dreaded date of June 28th, 2008. That is the date Saiful made a police report claiming being sodomised by Anwar on June 16th.

Tomorrow would be day 16 since Anwar's trial began on February 3rd.

To begin trial on the slick and slimy weasel, it was a challenge by itself. Anwar would constantly come up with drama after drama, excuses after excuses, and court filings after court filings.

When trial was about to begin in mid 2009, Sulaiman Abdullah claimed sick until he quit in July to replaced by Karpal Singh. There were various filings and appeals including application to strike out the case, syariah court diversion using qazaf, request for evidence disclosure, etc. 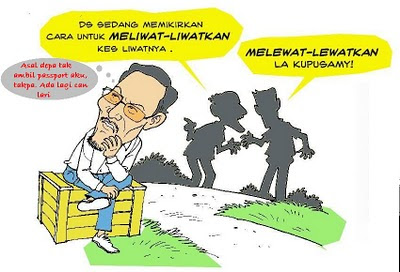 As opposed to Sulaiman, Karpal Singh the politicians is more willing to play along Anwar's game for the Court of Public Opinion than Legal Court at Jalan Duta.

There is never a day in court, which Karpal Singh would not ask for delay or adjournament. Anwar is quite happy with any form of delays, even if it is only to end the day's session at noon.

His hope is see the case stretch till near the next General Election and spark a Reformasi II revival for him to wrestle power from Barisan Nasional and be pardoned free.

Sulaiman Abdullah, the former leading lawyer and part of the legal team for the 1998 case, had withdrawn as leading lawyer over a dispute in the way the case is supposed to be done.

It is strongly believed that he refused to be part of the mockery of endless delays. After willingly playing sick, he quit at just before trail is about to begin in July 2009. As far as the public is concern, they were told Sulaiman is sick.

Anyone of these three can step up to the plate at any courts in Malaysia. What exuse will they come up with tomorrow?

Sivarasa Rasiah was believed to have had difference in opinion with Karpal and quit. That puts Anwar's legal team number to 13.

PKR's Communication Chief, Latheefa Koya was the last to join to make up into a team of 14.

This does not include a separate team of syariah lawyers; namely Kamar Oiniah and Shabrimi Chik but still bigger than the 1998 team of 10.

Maybe this is too much and some of those mentioned lawyers have dropped out. With such numbers of lawyers available and capable to replace Karpal Singh, is it fair to the courts and victim for Anwar to ask for delay? 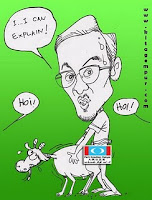 This delay tactic by Anwar is beginning to be obnoxiously sickening.

In one occasion, Anwar fabricated a request to visit again the scene of the crime at Apartment 11-5-1 Desa Damansara Kondominium for the afternoon session. It turn out, Anwar wanted to visit Apartment 11-5-2 and 11-5-3, two Apartment he claim to have had meetings.

Since the two Apartments are not part of the crime scene, it is not under court temporary possession and keys had to be secured from owner.

For that he managed to get a day and a half of delay since it requires his former friend and owner Hasanuddin's permission for entry. So happen, Hasanuddin is out of town.

From the onset Saiful made his police report, Anwar has resorted to conjuring up all sorts of dirty tricks and even malicious and seditous ones.

Immediately after knowledge of the police report, Anwar created an International scene by hiding in the Turkish Ambassador's home at the next day on June 29th. While still inside, he had his lawyers filed a defamation against Saiful on June 29th.

That did not stop Anwar to make a filing in court to stop both their involvement in the case. All along, his intention is to find a legal loophole to stop the whole Police Force and Public Prosecutors Office to investigate and prosecute him.

From early February to July, the court had gone through only 2 prosecutor's witness. There is another two doctors, two Chemists and Apartment security before the court decide if there is a prima facie case against Anwar.

If there is, Anwar will have to defend himself. Many believe he has no alibi to save him. The Apartment camera is there to dispute any claim.

Most difficult for Anwar is to dispute his bodily deposit at Saiful's anus. Other than fault finding on procedural issues, how will Anwar dismiss the Chemistry finding that the DNA found is his and is from a semen? Let's end this posting with a jual pantun:

It is good that Anwar's passport is still with him, otherwise we won't be able to see him apologizing to his jewish masters.

It's a no brainer, really.
Deny, delay, chaos, confusion etc, all just to get a name in the record books.

Blame the judge. He's the one granting the delays.

But hey, what about justice delayed is justice denied? Was that not the PKR battle cry?

A GOOD MAN DOES NOTHING.