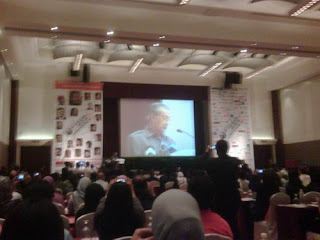 Dr Mahathir's speech today stressed on bloggers to be truthful in their reporting of event and views, to avoid hurting anyone, and maintain reputation of blogs by being responsible.

It is hard for Government to control blogs but blogs disseminating untrue information will eventually be deserted by readers. In order to maintain respectability and credibility, he suggested that a code of ethics for bloggers and be voluntarily adhered to.

For those quick with the grip bureaucrats at the Ministry of Information, Culture and Multimedia, don't be too over eager. The suggestion is for self regulation and be done voluntarily.

The opportunity from no control on the flow of information has attracted bloggers to expose wrongdoings by politicians and public officials.

In doing so, he reminded bloggers again to tell the truth and not be driven by likes or dislikes towards anyone.

Comments made by Malaysia's number 1 blogger seemed to strike a similar chord with certain commentators' belief that this blogger is getting personal with Tan Sri Zarinah, Securities Commission Chairperson.

For that allegation to hold true, there must be tangible personal benefit at stake for someone to be considered getting personal towards a person.

It sound corny and perhaps rhetorical, does this blogger's concern for the survival of his bangsa (both meaning) and distaste for corruption, abuse of power and incompetence considered as sufficient and tangible?

That is something we can all deliberate on but only God knows the sincerity behind anyone's words.

The Internet and blogging has bare open all forms of control in information flow and in a practical sense, it has achieve that the "true freedom" of information.

This is unlike mainstream media where there exist some form of censorship by Government and regulators or by editors. Most of time censorship comes from the personal interpretation of reporters and writers.

Dr Mahathir has repeatedly spoke of the need for both mainstream and alternative media to back what is written and write about the truth.

How do one determine the truth? Only God knows the absolute truth.

The best that we can do as mortal human with limitation is to be truthful. It could mean as to not lie in our words. That itself can be a difficult task as to determine which is the truth and which is not.

To this blogger's interpretation, truthfulness relates to about being frank, sincere, and honest.

It means being transparent in our view, analysis and source. In the event, the source of information cannot be divulge or only hints can be given, be honest about it. If it is only personal belief or speculation, say so.

And if there are response, rebuttal and denial of our writings, this blog have no qualm in publishing it. More so, when this blog is proven to be wrong.

There should not be any practise to hide or lie using deceptive phrasings.

The Internet is a powerful tool to communicate and dissiminate ideas. Dr Mahathir said it took WIlliam Wilberforce 20 years to campaign against slave trade in Britain some 200 years ago.

With the Internet, blogs and social networking, the reach is faster and global.

Dr Mahathir took the opportunity to reach to the young crowd on his favourite campaigns to Criminalise War and boycott against Tony Blair.

Being frank, sincere, and honest in his words has always been one attribute of Tun as a leader.

It proves the Christian saying that the truth shall set you free. It has helped him fight against lies and slanderous accusations made against him.

This should be emulated by many politicians, corporate and public officials. To a certain official, they should realise that the truthful ways is no more about being able to convince the Prime Minister or Minister in charge of EPU.

I hope you heed our beloved Tun's advice. While I appreciate your enthusiasm to right some wrongs but I must say that your twisted facts and nasty links of personalities have affected your credibility.

In short, the person yang kena taruk sure hurt one but people at large will nod their heads.

Right Bloggers must write Mahathir's truth while the Tun can merely forget them.

TDM reminded bloggers again to tell the truth and not be driven by likes or dislikes towards anyone. Interesting quote sir.

The truth sometime hurts and that's what NSTP under the Liberal Malays is about today.
Najib or Umno may approve or disapprove their foibles but in reality their actions are killing the establishment.
Good Luck

I am not a public figure to live up to any expectations.

What credibility do I need to worry about?

If I had did some nasty things, why are those affected still yet to come out to point where I am wrong.

Are an interested party? Tell me where am I wrong?

Voicey.. u r wrong to the people who praise Mahathir and take Mahathir word as Qur'an. That all. Just forgive that anon. Let him dreaming... we knew Mahathir only good at talking and advising, that all.