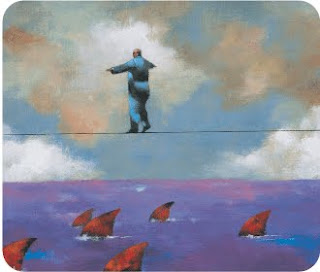 This blogger received a call this morning from Little Bird about the last two postings on Dato Dr Hamzah Kassim.

Little Bird is involved in human resource and his expertise in training. He is a position to give the lead on Hamzah.

She did some work on the recent New Economic Model and had discussion with Hamzah, who is a member of the NEAC. That relationship developed to a level they were freer to express their views.

Naturally, Little Bird was happy that the wrongdoings and conflict of interests of Hamzah was exposed and raised in Parliament. Her tone this morning was a little different.

"You know why I had wanted you to play back the issue of Hamzah?" she asked.

"I would assume you wanted to right the wrong."

"It is more than that," she explained.

"Mind you he is a Member of the NEAC that was picked by Tan Sri Nor Mohamad Yakcop."

She couldn't finish his words.

"He said to me that he knows Anwar and have met him. In his own words, he said Anwar is okay. I should meet and listen to his idea."

"Listening to Anwar is fine. Believing him is another thing." I replied.

"That's why I had to leak him to you. He is just an opportunistic business man who really has no conscience and has the interest of the nation in his heart. I can still can accept that. But to actually believe Anwar is okay?"

"Yes ... only an insane and indifferent would be taken by Anwar.

I continued, "I am sure you are aware of the recent revelations of his closeness with the American Zionist cabals. That should instill fear in every Malaysians concern with our independence. Anwar is an American stooge who bow to Israeli evil network."

Anyone coverting with foreign powers and power brokers is not any consideration for position for high office in this country.

Whatever reform that Anwar intend to bring are merely sugar-coated promise for him to assume power. He is not a sincere man. He lies to the hilt. When in power, he succumb to the whims and fancies of the superpower.

While I was lost in my own thoughts, he then said, "Now you understand why Ibrahim Ali went on to call Melayu Liberal as traitors. He is one."

Melayu Liberals are corrupts enriching themselves using the Bumiputera special previlages but is against defending Malay and Bumiputera rights and interest for others' benefit.

The guru of Melayu Liberal thinking is Anwar Ibrahim, thus his tendency to sympathise with Anwar. Then you have characters like Nor Yakcop, Tingkat 4, Khairy, Amirsham Aziz, Zaid Ibrahim, etc. On the UMNO side, the ringmaster is Nor Yakcop and he has past links, similar agenda with Anwar and sleeping sympathisers awaiting to reveal themselves.

Any Anwar sympathiser cannot be tolerated.

The danger with characters like Hamzah is that he has access and gaining the trust of those in the corridor of powers and top GLCs. Worse still, his motivation is not about having his services benefiting the nation but merely to enrich himself.

By suggesting schemes that looks wonderful and immediate launch but doomed to fail, it will only put the Prime Minister in a precarious position to face the voters in an upcoming general election soon. And, the multimillion ringgit schemes promoted does no benefit.

The Government is willing to put money in his idea of Talent Corporation. Will it suceed?

Talent Corp to woo back 70,000 Malaysians

He added this move would be made possible through the establishment of Talent Corporation next year, he added.

“We want them to return so that they can offer their ex­pertise to the country,” he said after meeting Bayan Baru Um­­­no division members here yesterday.

Nor Mohamed said many Malaysians were now residing in Hong Kong, New York, the United Kingdom and other countries due to the lucrative income that they earned overseas.

“We want to make available a comfortable working environment, not only for them but for all Malaysians under the 10MP.

Nor Mohamed also said that the Government had been emphasising more on training and skills to ensure that investors continue to choose Malaysia as their destination.

“Many think that vocational schools are not mainstream and therefore parents don’t send their children to study there.

“But those who are not academically inclined can earn a lot by enrolling in such schools and later continuing their studies at other institutions offering skills training,” he added.

Anything that has Nor Yakcop touch is a guanteed failure. The man should be in the Guiness Book of World Record for the biggest loser in financial market.

He is now sitting on another mountain of loss of his creation ie Khazanah and the GLCs or Government Losing Concerns. That should put him in the same Guiness Book of World Records for the same category for Corporate Finance.

They are all appointed by him, his cronies or all connections lead back to him. The failure part is now lurking to be known to the public.

Nor Yakob says Talent Corporation will be tasked with getting back 70,000 Malaysians to come back and work in Malaysia. Logically, will they come back with the disparity in salary and lifestyle?

By the manner things operate in Khazanah, GLCs and now Government, they will hire Con-Sultan to prepare and even to implement new initiatives and endeavours. Read back about Pemandu and Syed's Khazanah's Tuna and many other ventures to be revealed soon.

Hamzah's Innovation Associates (IA) will be there ready to absorb the allocations to Talent Corporation.

Cantik ... he pitches the idea. Politicians too easily impressed and in need for a launch would quickly agree and announced. Seems no one bother to look at the most important planning stage and that is the stage we always failed i.e. implementation.

This place opportunist like Hamzah in the right position.

IA will be appointed be appointed as a human resource consultant. They will be travelling around the world to meet Malaysians and other HR consultants abroad. To earn their keep, they will conduct workshops, interviews, recruitment, etc.

In order to reach to the mostly Chinese Malaysian in cities of the world, expensive advertisements in major newspaper will be spend and perhasp TV advertisements.

Government will be charged for all these. This is business and what is charged will be more than what is spent. If there is a corrupt KSU, he will insist that the claim be inflated further.

The worse bloating of claims heard is for every RM10 million, theirs is RM9 million. Everyone plus the Minister is covered.

Even if IA can do the job at a more cost efficient price, it will still add up to be in the hundreds of millions.

Government will spend a huge budget on this and it is expected to fail because the job, challenge, salary and lifestyle here cannot match what is there abraad. In these day and age, one expect patriotism to sell?

One can give the excuse this is about giving opportunity to a bumiputera to capitalised for future endeavour? Hmmmmm ... with him and Nor Yakcop as Anwar's crony and sympathisers, that is not where it will be heading.

In the meanwhile, these two lalangs will pretend to help Government.

By the look of things, they are running the country to the ground and make voters meluat with BN so that Anwar can pick up the pieces and claim the primeirship on behalf of the American Neo-Con and Zionist cabals to control the strategic Straits of Malacca.

Hamzah's network is quite extensive. He is close to Khaled Nordin, the Minister for Higher Education that allowed Pakatan to control campus politics and the mind of future voters.

From Dato Effendi Nowawi to Nor Yakcop he had continuosly maintain a close relationship with Ministers in-charge-of EPU. More so now that he is a member of NEAC.

The beauty of this all. Hamzah is a member of some committee in MACC. That will shield him from potential charges of corruption. It is simply too embarassing for MACC to charge its own member.

I would rather trust Paul the Octopus than Anwar and NMY.

ok..your thread makes sense although I believe bringing in arse lover is spreading the story thin.

This BN gomen is going to go down come election time. Why not ? Chinese will shun MCA and Malay voters won't voter in MCA candidate - what with all the big loose talk unfriendly to the clueless Malays. Indians ? they are not significant because of their numbers... Malays will not vote in Indian candidates because they have been very rude to the timid Malays. So Chinese and Indian candidates can only dream to be in the gomen.

What about Malay candidates ? take me for instance..I will not vote in a Malay led gomen which continuously betray the Malays and other Bumiputeras..I can't be bothered to vote ..

Malay only hope is to throw in their support for PERKASA.

This country will never be ready for the kind of political fabric yang PM mahukan..Chinese will always be Chinese, Indians dengan loyar-loyar nya and the malays...they are facing a wall.Baik hentak kepala kat tembok

I would assume that if someone that has been in politics for so long will have better sense..what a letdown. Let the country go bankrupt come 2019 ,vote out the current ruling Idiots and lets have...I don't know what.

"By the look of things, they are running the country to the ground and make voters meluat with BN"

Pardon me but isn't there a PM with a Cabinet in Sitting??

I find it unnerving to read these kind of comments being bandied about not only here but in a lot of other places!

Do these people really have such a free hand to do as they wish that they can "Run the Country to the Ground"?

What are the Ministers Doing?
What about the KPIs Loudly Announced early this year?