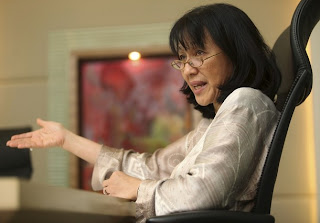 She is not a mute .. see picture
It is no more a secret.

It was not supposed to be divulge yet but it is already out there. Syed Akbar broke the story here and Rocky commented here.

Securities Commission Chairwoman tried to meet a select few bloggers via a "Minister". Positive engagement between bloggers and officials are welcome although it is a cheap media relation trick. But not for this one.

This blogger is still disgusted with Tan Sri Nor Mohamad Yakcop's interference with the MSN, particularly Utusan Malaysia for censoring criticism against him and Tan Sri Zarinah Anwar by YB Wee Choo Keong in Parliament.

In the midst of the expose, she was believed to have called and was going frantic at Rocky for giving links to this blog. Is that the transparency and good governance she usually spew to PLC Directors and officials?

For her paranoia and cheap press relation trick, does Zarinah expect us to receive her with open arms?

Press Secretaries usually buddy buddy with members of the press to avoid getting critical news of their boss and seek favours in moment of needs. Of late, they are using the same trick with bloggers, particularly vocal blogs with big followings.

It is unlike our pro-Pakatan counterpart who are not independent enough. They lost credibility for promoting excessive spinning, and slanderous propaganda. See the Rocky-Harris debate here and here for a representative sample of a pro-Pakatan and pro-PKR (Zaid Ibrahim faction) blogger.

Going back to Zarinah's attempt to do a cheap trick, this blogger was called up by a "Minister"'s confidante to convey his/her polite request that this blogger meet-up with Zarinah.

This really pissed this blogger. It is as though she is trying to use political pressure on bloggers. What made her think as though we are on the "Minister" 's payroll and be instructed upon?

Zarinah and "Mrs" Azizan met the "Minister" over a long dinner to discuss about the Kenmark affair. However, as told by the confidante, Zarinah will not make any public statement.

That stance of her is an insult to this blogger's intelligence.

If Zarinah had done her homework before making such statement, she would have known that this blog knew she was up for renewal and is well aware of "SC Chairwoman renewal politics?" in late March. [She was renewed for a year from April 1st.]

It is crystal clear that she is hiding from meeting the press and avoid being asked publicly of allegations on her spouse by bloggers and Wee Choo Keong in Parliament.

It is as though she is trying to deceive the leadership into renewing her contracts by temporarily hiding her misdeeds. Nor Yakcop wants his appointee renewed to carryout his dirty work.

The "Minister" is not at fault because when she met him/her, she appealed to his position in Government as regulator. She discussed her predicament and gave her side of the story on the Kenmark issue.

Fine and well. No one is stopping her from investigating as long as she does not try to rough up journalists.

At the same time, her issue has moved from SC's role in investigating Kenmark to serious allegation on wrongdoings by the "Mrs" and her credibility as Chairwoman.
Here lies the possibility that she may have not briefed the "Minister" on the "Mrs"'s alleged wrongdoings raised by bloggers and Wee Choo Keong in Parliament.

For a public official of her position to avoid the press, it puts into question her calibre and credibility as SC Chairwoman. 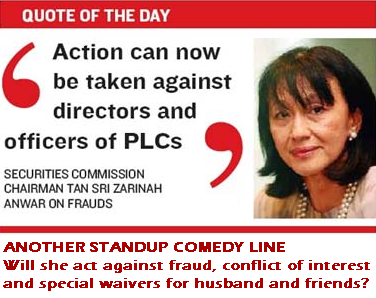 In this age where transparency is called upon, her refusal to answer to the highest body in the country and public via the press contradicts her so-called commitment against fraud and pursuit for transparency and good governance.

She is acting suspiciously as though she got something to hide. This is more so, with tainted Nor Yakcop helping out to cover for her.

The bloggers will not see it any other ways.

Zarinah must FIRST face the press and answer the questions made by Parlimentarian Wee Choo Keong. No simple denials please, because these days it is not good enough.

Show us where exactly allegations made against her and her "Mrs" are wrong. Reveal convincing details. If we are wrong, we are wrong. This blogger have no ego as tall as Ayah Pin's teapot and like that of Harris Ibrahim's to not admit any wrong or mistake.

With this kind character of the chairperson of SC, its no wonder that our FDI drop so drastically.

Long term investors will only put their money in country where corporate governance is of high level or at least serious effort to improve the level of governance.

Here they treat SC like a family concern or Sdn Bhd. SC is suppose to regulate the market for the interest of investors at large.

WHat is the point in recent weeks, that SC start to launch various slogan chanting exercice but all for propaganda only. Typical CAKAP TAK SERUPA BIKIN.

With all the exposed hush hush deal, the Chairperson has a lot to explain if integrity is still part of her vocabulary.

The right thing to do is to take few months leave on her own initiative and start to explain to show some degree of professionalism. Or the government suspend her services pending on investigation on all these allegations.

perhaps zarinah could apply for a job at The Edge that she fondly look up to.

'What made her think we are on the "Minister" 's payroll? '

Conclusion : Minister on Zarinah payroll too.

That's exactly why I am not revealing. People like you could lose focus and be swayed to make an issue out of the "Minister" and his confidante.

KUALA LUMPUR: The Securities Commission (SC) has extended the contract of chairman Tan Sri Zarinah Anwar by one year, to take effect after her two-year term expires on April 1.

Zarinah was appointed the regulator’s chairman in April 2006 on a two-year contract that has been renewed once.

Upon completion of her one-year extension, Zarinah would have served as chairman for five years.

Zarinah had served as deputy chief executive and was a member of the commission since Dec 1, 2001.

Prior to joining the SC, Zarinah was deputy chairman of Shell Malaysia.

Prior to working for Shell, Zarinah served as a magistrate in Johor Baru, senior assistant registrar at the Penang High Court, solicitor in the Public Trustee’s Department and assistant parliamentary draftsman in the Attorney General’s Chambers.

Zarinah graduated with an LLB (Hons) from Universiti Malaya in 1976.

.... looks like her tenure will not be any longer.

u know what a squirrel (tupai) is. as the malay proverb puts it - sepandai-pandai tupai melompat, akhirnya jatuh ke tanah juga'.

zarinah thought she has managed in applying a blanket on her wrongdoings... kesian dia, kan?

Another Brick In The Wall. Anwser tis question for ALL. Zarinah met the MINSTER. Why did she bring her MISTER? U say they spoke of KENMARK. Is Azizan chairman of SC, somewhere in DENMARK? ? ?? Zarinah's MISTER is A STOCKBROKER? Zarinah's MISTER got a big JOKER. In the STOCK market game of POKER? All he got to do is POKE her. By Pinky wit additional vocals from Fat Lady and Jho Low.

Minta tolong promote forum below.
We are after something big that will lead directly to Black Midas and how he screwed up the economy.

Something fishy here. Why call to meet with the blogger who exposed this if the exposure is untrue?

Are you trying to bribe the blogger to be quiet?

why are you on this personal rampage against someone you have very little knowledge off? I find it very unislamic what you've done here. you seem so sure of your convictions of insinuations that you actually believe you are right. why do you hide behind a voice? if you want to be real hero why not expose yourself? then baru la jantan kan bro? ni nak gaduh dgn perempuan but hiding... tak macho bro.

you got your facts wrong and you are cannibalizing people at your own mercy. it's very dangerous. my advice to you is repent and apologize. don't assume your own wicked thoughts and print them as it's true. and the comments made based on your twisted stories are so libelous only god can help you sir!

It is not the person or her sex, it is about her position.

If she is right, she can talk to the press.

Explain and I will assure her reply is published here.

If I am found wrong, I will apologise.

She owe an answer not to me but to the public!

It is not just about me.