A message written on the Securities Commission (SC) website here with a face of SC Chairperson, Tan Sri Zarinah Anwar next to it reads "Stand above the rest."

For that she will have to deliver and be responsive.

There is a longer and more visible message above her's: "We facilitate a vibrant and collaborative environment, which generate and protect wealth and creates value for all." A simplistic but cynical construed interpretation would be SC will "help and collaborate" with and for "all" to make money in the market.

In our past postings, we had raised issues on the integrity of SC and it's Chairperson. Strangely till to-date, SC's response had been limited to only a denial statement. There is a line from the British comedy series, Yes Minister, that says a rumour is confirmed when a denial is made. Silence only raises more suspicions.

How would Zarinah and SC respond to this posting which looks into SC's recent probe into a poison pen e-mail that contributed to share price drop and wiped out RM650 million capitalisation? Remember that she refused to give appropriate response to issues about her from an MP in Parliament.

In the face of rising cynicism, how would an SC wishing to "stand above the rest" response and deliver?

SC response with an immediate investigation and statement on Mudajaya based on some frivolous e-mail but not on complains that have reached Parliament. It leads to the similar issue of selective response or more specifically, selective investigation.

And someone in the know of SC's intention to investigate could make money arbitraging on the price volatility.

This blogger was tipped of a posting by Malaysia-Finance blog here. The blog questioned the highly discretionary basis for SC's decision to investigate any public listed company based on an anonymous e-mail.

With price of Mudajaya shares responding violently to an investigation by SC, this situation can be replicated on other companies and someone with an inside knowledge of SC's plan to investigate public listed companies can make money out of it. That someone could also be from inside SC. 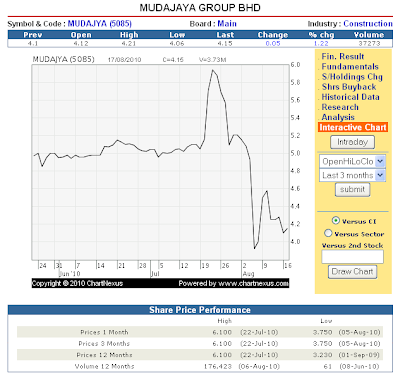 Refering to chart taken from The Star, share Mudajaya share price took a heavy blow from RM6 to as low as RM3.80 due to the poison e-mail and by second fall, due to confirmation of SC investigation.

Mudajaya issued a cautionary statement to the public and had to undertake shares buy back on August 5th to stem the fall. Read Read Bloomberg report on Business Times here and Bernama here.

As at Saturday August 7th, SC is still investigating the matter, presumably also on the Indian power plant deal mentioned in the e-mail. There was a short rally after a buy call by some broker and a column in the Star on August 9.

But by the look of the chart, the share prices has not recovered much. It probably need a clarification from SC to revive confidence in the company. As Tee Lin Say column below described, this was truly unnnecessary.

Mudajaya in the spotlight, but for all the wrong reasons

PETALING JAYA: In the past week or so, Mudajaya Group Bhd has been in the limelight - but for all the wrong reasons.

The events were triggered by a letter to the Securities Commission (SC) alleging improprieties in relation to Mudajaya’s power plant project in India.

The SC had confirmed that it was looking into the matter.

Meanwhile the stock, which had been under selling pressure for most of the week, gained some ground in Friday’s trade.

Mudajaya started out as a construction company in the 1970s, founded by its current managing director Ng Ying Loong.

In 2004, Mudajaya was listed at an initial public offering price of RM1.28.

Mudajaya’s first foray into India was in early 2000 when it was involved in a road building project in Udaipur-Ratanpur-Gandhinagar in Gujarat, India for RM114mil.

But it was only in 2006, when it started making inroads into India’s power plant sector, that it became more well known.

Although it had its roots in construction, it was soon building its name as a full fledged independent power producer (IPP) in India.

Its construction orderbook presently stands at RM5.6bil, and the company has mentioned that it is looking to add another RM1bil in 2010.

In its financial year ended Dec 31 2009, Mudajaya’s net profit increased 164% to RM119mil from the year before, thanks largely to locked-in contracts from India.

Of its orderbook of RM5.6bil, RM3.4bil worth of jobs come from India.

Mudajaya’s breakthrough in India happened in April 2006, when, together with its partner RKM Powergen Pvt Ltd, they signed an agreement with the authorities of Chhattisgarh, India, to build and operate a 1,200MW coal-fired plant.

The project was carried out by RKM Powergen Pvt Ltd, in which Mudajaya held 26% while RK Powergen held the rest.

The value of the first phase of the power plant was estimated at RM869 mil.

Then in May 2009, RKM Powergen signed a power purchase agreement for Phase 2.

It should be noted that SC’s review of Mudajaya’s Indian project stemmed from a poison pen letter and related to Mudajaya’s cost of investment in RKM Powergen Pvt Ltd and the returns on its engineering and procurement contracts.

Some analysts had also noted that the company enjoyed exceptionally high profit margins compared to its peers.

Mudajaya’s Ng has told the media that the high margins were due to incentives put in place by the government of China, where most of its equipment were procured.

Last Friday, the SC said it was still reviewing the affairs of Mudajaya but added that it aimed to conclude the review as soon as possible.

The SC also said it had engaged all the relevant parties, including the management of Mudajaya.

It is understood that SC’s review of Mudajaya is still at the “surveillance” stage and has not escalated into a full investigation.

Mudajaya has also made known its aspirations to widen its overseas reach.

The company is looking to break into the Indonesia, Indochina and the Middle East markets.

The projects the group is vying for include a RM400mil IPP in Laos and a RM300mil exploration and production concession contract (EPCC) in Indonesia.

On the home front, Mudajaya is one of the contractors shortlisted for the much-anticipated LRT extension project.

Its most recent local contracts involve building a hospital in Penang and a low cost hotel in Johor.

According to OSK Research, Phase 1 of the Indian contract hit 41.9% completion as of June versus 23.2% in January.

“We understand that deliveries for the key plant components are slightly delayed to August from June as scheduled earlier due to minor specification changes.

“Nonetheless, management reaffirms that the entire project is on track for completion by end-2012,” said OSK analyst Jeremy Goh.

Goh expects the bulk of the revenue recognition for Phase 1 to take effect this year.

There are also plans to expand capacity by another 2x360MW when the existing four plants near completion.

Meanwhile, the Indian government intends to set up nine Ultra Mega Power Plants (UMPPs), three of which have been awarded.

The next two up for grabs are located in Chhattisgarh and Orissa, for which the prequalification of tenders will be conducted by end-August.

Each UMPP will have a capacity of 4,000MW and cost about US$5bil.

Mudajaya plans to bid for both UMPPs via a consortium.

Tanjong Plc has said it intends to bid for the UMPPs together with Mudajaya.

Currently, the biggest shareholder in Mudajaya is Dataran Sentral (M) Sdn Bhd, with a 24.33% stake.

According to Mudajaya’s latest annual report, the Mulpha group holds a substantial stake of 21.37% in the company through Mulpha Infrastructure Holdings Sdn Bhd.

In a filing to Bursa Malaysia on Thursday, the company said it bought back a total of one million of its shares at prices from RM3.80 to RM4.55 worth RM4.29mil. After the purchase, Mudajaya has cumulative net outstanding treasury shares of 2.62 million.

Mudajaya had received the approval of shareholders during its EGM to buy back 10% of its shares for the year. As of March 31, its revenue jumped 90.91% to RM239.35mil while net profit tripled to RM50.6mil from RM14.04mil.

She is saying basically that the fundamental of the Company is fine.

My Malaysia Stockportfolio blog here claimed that "there was nothing new to the emails than what was widely reported in the media earlier" and "uncertainty over the outcome of the Securities Commission (SC) probe created fertile ground for the rumours to take a life of its own."

From past experiances, SC or past KLSE announcement to investigate companies for extraordinary share price movement seldom effect the share prices. In this case, it does and a sharp drop indeed.

What do you expect? She is not born with balls. The husband is as yo described Mrs Zarinah.