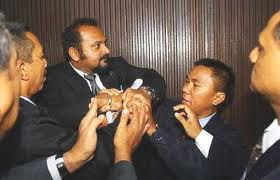 A controversy erupted today at the Inquest on the murder of Teoh Beng Hock that occured early last year.

The "suicide note" claimed existent by the NGO, Jaringan Muda Melayu (JMM) last month surfaced at the Inquest today and caused quite a ruckus.

Gobind who represent the family of the late Teoh Beng Hock protested to the submission of the suicide note and left the Inquest in anger. He accused the court for judicial abuse of power.

The position taken by Gobind is strange. As one pro-UMNO blogger, RBF here pointed out Gobind is supposed to seek the truth for the family.

Why should he attempt to stop an evidence that will shed more light on the murder? Is he trying to avoid the embarassment to DAP for having accused MACC for the death of Teoh last year? Politik juga cerita.

RBF also asked where lies the issue of judicial abuse of power?

Lawyer for the Government, Tan Hock Chuan had told the Inquest that the letter had been available since October last year. Why was it not submitted then? Is there a time limit to submit evidences?

I am no lawyer. You tell me.

Before moving further, read the Bernama report below first:

SHAH ALAM, Aug 9 (Bernama) -- A new evidence has surfaced at the inquest into the death of political aide Teoh Beng Hock, causing dissatisfaction among lawyers representing the Teoh's family and the Selangor government.

This resulted in the hearing, which was supposed to resume today, to be postponed to Aug 18 to give time for all parties to obtain further instructions from their respective clients.

Teoh, 30, who was political secretary to Selangor executive councillor Ean Yong Hian Wah, was found dead on July 16 last year on the fifth floor of Plaza Masalam here after giving his statement to the Malaysian Anti-Corruption Commission, located on the 14th floor of the same building.

Met by reporters outside the court, Gobind Singh said the latest development had affected their case because the evidence should have been submitted much earlier.

"This is new to us, but not new to them. They have the documents and they have been in their possession since October," he added.

Before the hearing started today, Gobind Singh stood up and requested all parties to discuss the matter in chambers, but an hour later he was seen leaving the chambers, looking angry.

The others left the chambers about 15 minutes later, with Tan telling reporters that the inquest had been postponed to next week.

Gobind Singh only agreed to meet the media about an hour later and called for a royal commission to hear the case.

From blog sources like the Unspinners here and verified with certain sources, the suicide note was written in Chinese and addressed to Ean Yong.

It was found in Teoh's bag placed at the edge of the seat he slept at the MACC Shah Alam office in that awful night.

In the letter, it is understand that Teoh told Ean Yong that he was "forced" to tell everything to MACC and will hereby commit suicide.

Other than Tan Hock Chuan, few parties had known of the 'suicide note'. It include Datuk Abdul Razak Musa, who represented the Malaysian Anti-Corruption Commission, Deputy Public Prosecutor Mohamad Abazafree Abas and perhaps the police, since translation from Chinese is done by PDRM.

Logically, submitting it as evidence now should not be an issue. That should answer Gobind grievance immediately. However, it is fair on his part to know as to: Why is the letter only submitted now?

The subsequent question would be: Why did Tan Hock Chuan and the lawyers representing the various Government agencies not submit it back in October 2009?

The buck stops at the Attorney General, Tan Sri Gani Patail. Did he stopped them from submitting the suicide note? Why?

Inquest is resuming next week.

The elusive Dr Porntip is appearing on August 18 and will she still insist on the probability of a homicide at 80% after undergoing the second autopsy and the other experts are saying suicide.

Bravo the DPP team in catching the defence counsel team's with their pants down.

It is getting harder to have faith in our judiciary now.

More importantly is how did Jaringan know?
Only way is if there is a leak in the government. Most likely the AG's office or police?
Was the PM informed?
Why did they make a fool of the PM?
Why did the PM had to visit family of a guy who had committed sucide? Why was the PM made into a clown?? How was TEOH forced? Was he beaten or tortured by the MACC?
If Teoh was forced, why is it then did the MACC say that TEOH was a witness and not a suspect?
Was TEOH forced into being a WITNESS?
Why did the IO lie and say he only got the note in October?
Why has the IO not been sacked?
How can we trust and IO who says he got hold of a letter in October, then say no its in July?

Go fuck yourself also. No one listening you.

It is harder when you want someone to give you the answer and not look at things critically.

So you get taken in by what is said by spins and official statements.

A lot of shit has hit the fan. Now it is falling down on so many peoples face. A sucide note, so late in the day? Its a tragedy for Malaysia. The PM should sack the AG, and everybody involved in this botch up. Its a disgrace.

Remind me of the JFK assassination case. Hope nobody will end up like Oswald.

Can't imagine if the "sucide note' was "MACC killed me note" written by Teoh Beng Hock instead.

Gobind would surely demanded vehemently for the "note" to be furnished as new evidence no matter how late it is.

This super duper hiprocrite lawyer at his best. We all want to know the truth don't we? So let the Court examine and verify the sucide note then. Who know it could be fake, or TBH only wrote it after his death.

Now only found the suicide note? Took a year to seach a bag??? Govt think ppl stupid?? Take a year to search a bg? Come on la...if it took you a year to find that, obviously its forged la. BN always want to fool rakyat...I hope they lost really bad next election. Human only live up to max 120 years...rakyat may suffer now, but BN corrupts will suffer eternity in hell. Bertaubatlah sebelum terlewat...