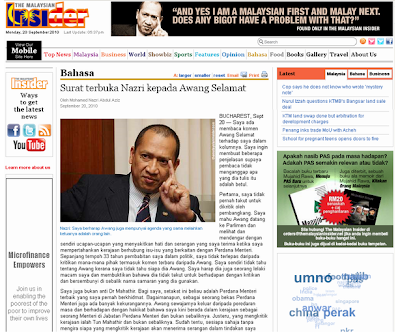 The heck with what was said in the exchanges between Nazri and Perkasa's Ibrahim Ali. It is not about who is right or wrong. Witty or dull.

It is a battle for the majority Malay public attention. With sentiment in favour of Ibrahim, Nazri has no way to go but down.

Our curiosity on Nazri is more on, if he knows who his boss is, why did he published his open letter to Awang Selamat on The Malaysian Insiders?

Say Utusan Malaysia denied him access, why didn't he respond on the nationwide New Straits Times? That is, if he doesn't mind the declining subscription of the Melayu liberal-led newspaper.

There must be reasons more than focusing on the different audience and avoid being known by other audience.

The empty and shallow rhetorics spewed by Nazri in his second wave of attack on Perkasa with assistance from spinners The Malaysian Insiders, here, here and here is in consequential.

Since he acknowledged he is merely a barking dog for the Government of the day in this open letter to Awang Selamat, again on MI here, we can reduce and write off his words as worthless.

Simply, it is not to difficult to spot his position in the past that contradicts his present. He would be in the same mould as his friend and fellow Alma Mater, Anwar Ibrahim.

If we need to hear someone counter him, read what Awang Selamat dished him here that brought about his open letter on MI here.

Read here how Ibrahim Ali brushed him off as "emotional respond" void of any "valid points" to shame him. Earlier Ibrahim brushed off Ku Nan, Nazri and Khairy with a single stroke. "Perkasa never seek UMNO's support."

For a Freemason hiding behind a Malay Nationalistic party and now rebranding as a liberal, his childish cabar mencabar challenge to Perkasa to register as a political party is out-moded and feudel.

Wake up Nazri! Politics is not just confine to political parties. Didn't these politicians realised that the game in every election, be it general or by-election, is to appease the undecided or partyless or independents?

MI is a pro-opposition portal and when Dato Syed Ali Al Habshee raised about certain quarters out to create a split among Malay voters, he is actually pointing right towards MI.

In a published letter to the editor here, Utusan Malaysia appealed to the leadership of UMNO to take action against such leaders.

If they are not holding positions, it is fine to contribute articles anywhere one wishes. Even that, if it is too rapid and repetitive, one start to ask questions. When one is holding position in Government and claim one's boss is PM Najib, it is totally inappropriate.

Especially, when one is in full knowledge that the editorial team is linked to Kalimullah and Brendan Pereira that contributed to the mess this country is in. Both of them are in cohoot with the traitor to the nation, Anwar Ibrahim and his lackey inside UMNO, Khairy Jamaluddin.

MI's Editor, Jahaber Sadiq is in cohoot with Bendera in Indonesia to harass the Malaysian Embassy in Jakarta and inciting hatred against Malaysia and it's people.

The expose after expose by Anuar Shaari, Anwar Ibrahim's former private secretary and a group by the name of Jaringan Melayu Malaysia (JMM) the link between the portal with Regalia Record Management, VPI International and Efficient E- Solution Berhad.

This is the linkage between the portal with Kalimullah Hassan via shareholders, Shaik Aqmal Shaik Alauddin and Sreedar Subramaniam.

If Nazri claimed his boss is Najib, does he not know that the slander against Najib and Rosmah using the murder of Altantunya that involves Raja Petra Kamaruddin via Malaysia Today and Bala Subramaniam has the touch of Kalimullah and Khairy?

Kalimullah is believed to provide Raja Petra with accomodation in London and some say his monthly stipend. There are others saying it is Soh Chee Wen and Zaid Ibrahim.

MI is an insidious hand and instrument to destroy Najib and UMNO. Najib should realise that even those in his inner circle is in cohoot with MI to destroy him. Omar Ong was exposed here and now Nazri.

why is it so difficult for najib to do a noble thing? Please....for umno and melayu......not for you.

"......why didn't he respond on the nationwide New Straits Times?

voice,
this is a case of, to quote marshall mcluhan, "the medium is the message"! :D

Unless if you can help najib to find a good barking dog if not better to replace a dobermann called nazri, then both of them know that they need each other for the time being to survive.

but for the dobermann to use MI really makes me wonder about najib.

Nice analysis, bro.
but I have to differ on this
"MI is an insidious hand and instrument to destroy Najib and UMNO. Najib should realise that even those in his inner circle is in cohoot with MI to destroy him. Omar Ong was exposed here and now Nazri."

Najib weakness is his weakness. Berapa kali mau hentam all these liberals daa. Najib has lost one battle against Perkasa and he cannot afford another. My NKRA for najib is how fast he can get rid of these Liberals before the people get rid of him.

what is your opinion on Nazri saying he is Malaysian first, and Malay 2nd?

Najib is hopeless, play safe all the time and always syok sendiri retorik

QUOTE from Nazri:"I am a Malaysian first and Malay next. Does any bigot have a problem with that?"

Many non-Malays were actually taken in; declaring what a "pure, 100%, Dinar-class Malaysian Nazri is". And Malaysian Insider also proclaimed that Nazri had "clipped Perkasa's wings"... that he had "forced an endgame to Perkasa." In his attempt to gain the applause with this staged `nobleness and indignation', Nazri has helped me to understand what it was that had made me loath Umno for 25 years. It's because of people like Nazri - the opportunists and tailcoat riders who are in Umno for themselves. Due to their ability to maneuvre into positions, they have been holding important posts by appointments.

No, Nazri is a`Malaysian' and `Malay' only because of his identity card... "incidentally". Only those who are extremely gullible would be taken in by this. Or those who hope Malays with positions would do their dirty job for them... that Nazri actually has the clout and following among Malays to kill off Perkasa. Sorry to disappoint, but despite his visibility in the media, in truth and compared to Ibrahim Ali, among the grassroots, Nazri is just a pygmy.

This `New Born 100% Pure Malaysian' image that he's trying to pass off -- ask him whether he lived by his words and proclamations. Ask him, all this while and over the YEARS, had he gotten `Reserved for Bumiputra' pink forms during allotment for new shares in Bursa Malaysia. OR, out of principle, had he refused them (because he is a Malaysian first) and had insisted on waiving this and had joined the queue? If it's the first, then there's an accurate word to describe Nazri - hypocrite... and a Jumbo, King-Sized one at that. Nazri is just a third-rate poseur, and it is people like him who make the grassroots hate Umno.