Perkasa was just ambushed by the ruling party, UMNO and it's Chinese component members, MCA and Gerakan. But they remain bold and came out unscathed.

UMNO Sec-Gen, Tengku Adnan that fired the first salvo made an about turn the moment Najib expressed his position that UMNO will not make enemy out of Perkasa or any NGO. Nazri, Khairy and the other accomplices are lying quiet, frustrated, and waiting to prance again.

Perkasa is moving ahead to launch it's nationwide tour from the constituency of Dato Ibrahim Ali, in Pasir Mas Kelantan on Saturday afternoon. The main speaker for the rally will be Tun Dr Mahathir.

By Ibrahim's estimate, he expect some 20,000 to attend the rally. When it comes to gathering masses, you must give it to him. It could exceed expectation or he was actually aiming for less.

This is especially so, with supporters and curious onlookers interested to hear what Dr Mahathir and Ibrahim has to say after the short episode with UMNO.

When Dr Mahathir came in Kota Baru to speak on June 25th 2006, he was greeted by a pepper spray at the Airport. Yours truly, Bigdog, and other cyber activists was together with Ibrahim right in the thick of the peppery mist.

Hopefully there is no more such foolish and uncivilised act to come from Kelantan.

Back then, the then Dato Seri Abdullah Ahmad Badawi was insecure and worry of the political threat from Dr Mahathir's speech in Kota Baru.

He called Tan Sri Anuar Musa from Perth, the first time Malaysian got to know the simple Abdullah had a taste for foreign homes in Perth. Anuar was in hospital recovering from a big bike injury.

Abdullah instructed him to stop, sabotage, divert and do whatever necessary from Dr Mahathir delivering his speech. In an earlier speech in Taman Melawati, Kuala Lumpur few months before, he was still speaking in riddles.

Unfortunately, Abdullah's bad intention was known. The time he called Anuar, there were 20 gawking eyes and ears in Tengku Razaleigh entourage visiting him. This news reached Dr Mahathir eventually and the rest his history.

This time around, the reception at the airport will be bigger than in 2006. Already assembled are few thousands of motorcyclist to receive Dr Mahathir.

Preceding to Saturday, Utusan Malaysia gave a sensational frontpage headline to an interview between Dr Mahathir and UMNO-Online. Read it here. 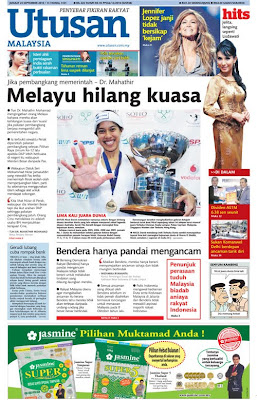 Unlike UMNO Online's partisan treatment to their headline here, Utusan's headline is enticing Dr Mahathir to express more of his concern on the plight of the Malays albeit the Bumiputera in the bigger perspective.

One policy after another, program, restructuring, transformation, and a list of new acronyms does not seem to address the Bumiputera's concern and insecurity.

Bumiputera is seeing their budget and allocation for scholarship clearly stated under the Constitutional Bumiputera special rights encroached by new programs for non-Bumiputera.

To the parents back home, that is a major betrayal. They had spend for the first year based on advise of Government officers with the promise to be considered for scholarship from second year onward. That will cost the Government votes from its traditional Malay constituents.

Not only is there scholarships but 1Malaysia Government is seen pandering to the Chinese. Private Chinese schools, which is not constitutionally entitled and going counter to 1Malaysia aspirations, are getting priority allocations over the national and poor interiors schools.

New Economic Model is seen as the total end of NEP and systematic destruction of the Malays.

The just released Pemandu ETP studies and recommendation is sending a wrong message to BN's traditional voters. The Government is relinquishing it's role in the economy to the Chinese dominated private sector.

As it is, the GLCs couldn't care less to any Bumiputera agenda. The economy planned is being driven for the elitist interest.

These issues could surface in Pasir Mas. But will there such preemptive moves (other than events to divert crowd) like what Abdullah did?

Najib is a gentleman in every sense of the word. He is not pretentiously pious in front but vindictive at the back like Abdullah was (and by recent political moves by his son-in-law and his associates, he still is.)

Although many are still suspecting Ku Nan and Nazri are acting on his instruction, there will be no instruction to sabotage Dr Mahathir to come from him. He still owes and respect much to the old man.

But there is no stopping the old feud between Ibrahim and Anuar, two of Ku Li's former protege. The last time Perkasa launched in Kelantan, Anuar orchestrated events to draw away some crowd and create traffic jam in town.

This time around Anuar is no more a relevent name, be it nationally or within Kelantan. Ibrahim has created national attention in his work in Perkasa.

It is attracting disgusted UMNO members and fense sitters. At the same time, Perkasa members could be found filling the void left by Permuda in UMNO's machinery.

They can be found among the speakers in UMNO's ceramah tour, bloggers and cyberactivist, Ministers' officers, and not surpisingly, as trainers at UMNO's traning centre in Janda Baik.

Khairy should be true to his words and resign.

UMNO could not depend on Pemuda UMNO but more on the individual "Perkasa" members.

Perkasa's boycott of UMNO can have impact on their prospect in the next general election.

Nazri must have lost his head to arrogantly claim that political parties are more relevent than NGOs. In today's politics, an independent Malay could dent his reelection prospect in the next general election.

Ku Nan shouldn't be too comfortable in Putrajaya with declining confidence and frustation pervading amongst Government servants due to encroachment by consultants and young wannabees in Government policy making.

It is heard that Najib was given an earful as many of his wishful thinkings was given a reality check by Ibrahim.

A nice surpise from this reality check. Look whose suddenly playing to the gallery? A Melayu liberal leading NST just realised that Ketuanan Melayu is not about Malay supremacy and about empowering (or memperkasakan) Malays.

Perkasa's rally tomorrow in Pasir Mas could be an opportunity for Ibrahim to show his new found strength to his constituency.

But to many out-of-towners and keen observers, they would like to see if it will lead to another pepper spray incident that brought a reaction from Dr Mahathir?

As long as Anuar Musa is kept at bay, there will be no incidents that pushed Dr Mahathir to be openly critical of Najib. It will not look good on him to keep criticising every of his successors.

But he will not mince his words to express issues of concern to the plight of the Malays.

Najib should not brush away his views. Chinese voters have hardly budged towards the 30% he wished for. The Malays are increasingly getting disappointed with him.

He is already in an alarming situation of "yang dikejar tidak dapat, yang dikendung berkeciciran."

All his long term grand ideas will be in the dump if he loses, along with Abdullah and his corridors. In both cases, con-sultans made the most out of it.

If Dr Mahathir campaign against him, he can spell the word finish forward and backward. Even if Dr Mahathir does not come out to campaign, it could spell trouble for Najib in the next general election.

Dr Mahathir's speech will have a major impact on the voting patterns of traditional Malay voters of UMNO. Melayu is now at a meluat stage. That spells danger.

unless if Najib and Rosmah want an early "Tun" Title.

I dont give a damn to Ibrahim Ali as long as Perkasa fill up the void left by the Mangkuk Tingkat 4 Pemuda.

This article is full of flaws and untruths...

How you can conclude the new Pemandu programs are for the Chinese? The local Chinese today are third rate compared to Chinese in other countries thanks to whom you know...

Good Chinese and talented Chinese are going in droves to other countries to cari makan and they are doing very well because of their command of Mandarin and English.

Yes, many able ones are staying put in other countries and leave the local businesses to the Malays so that they can get their 67%.

It is a win win situation.

You notice the status of our economy right? Why dropping?

Why do you say the scholarships entitlement is in the constitution? The constitution said.."special positions/rights". Can you explain what does that mean? Until today not a single person like IA dare or can explain.

No the Chinese are not fighting against the Malays. Today it is the Malays vs Malays and we Chinese just give our votes to whom who looks after OUR INTERESTS AS MALAYSIANS. Very reasonalble right?

TDM is now called by LKS as the number 1 racist in this country. What says you? I do agree.

Tahniah bro, I was a proud BERSIH steering committee. Now, I am a prouder PERKASA member.

Lets kick some Malay Liberals arses, Tok Him and TDM.

Yang dikejar tak dapat yang dikendong berciciran - is accurate. My observation is Najib is doing a lot of lonely battles. Where are his ministers, what are people in Barisan's doing right now to get voters on their side. Orang Melayu makin meluat, and is more chinese supporting BN now? I doubt it. This 1Malaysia thingy is a joke. Orang UMNO takut nak buat remarks pasal Melayu nanti kena tuduh racist, sudahlaa.

Without much elaboration, what credibility does LKS has to call Mahathir racist?

If LKS is not a chauvalist racist, a pig will be halal.

Pemandu programs are self serving for the economic elite.

Do I need to elaborate more? Do a number chack on the staff and people involve with Pemandu.

In MAS, Idris was racially bias for Chinese. The same happen in Pemandu.

If you dunno, don't talk.