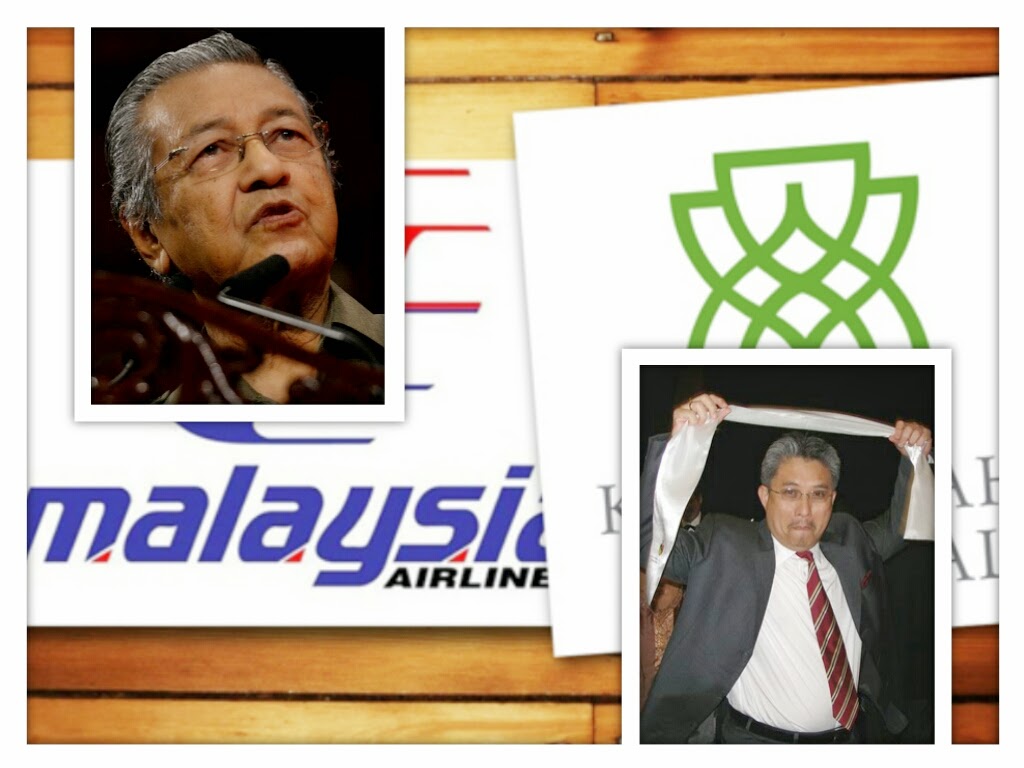 MASEU Executive Secretary, who is the supporter and henchman in the union for con turnaround specialist that repeatedly failed at MAS and Pemandu, Dato Idris Jala spoke again.

Again, he is missing the leaves from the tree to repeat his blame and call for CEO Ahmad Jauhari resignation.

He is still not addressing the real problem. What do can you expect from typical self serving and populist union officials. To paraphrase former American President Bill Clinton, it is Tan Sri Azman Mokhtar and Khazanal Nasional la ... stupid!

And, one clever statesman realised the validity in the argument of this blog's previous postings on MAS.

We reproduce the statesman's latest comment in his blog on the MAS privatisation or as he pointed out, it is nationalisation. Must be a wrong advise from a stupid overpaid and over rated Investment Banker.

2. The Prime Minister personifies the Government. If a company is fully acquired by a Government company, is it privatisation or nationalisation?

3. Yes, a company that is owned 100% by one entity, is not a public company. It is a private company. But if that person or entity is the Government, can it be said to be private?

4. I believe prior to this privatisation, Khazanah owned 70% of MAS shares. Its control over MAS must be almost absolute. None of the minority shareholders can really say ‘No’ to MAS even if they all act together. So Khazanah has been in full control of MAS all this time. And all this time MAS has been bleeding profusely. In 10 years it has lost 10 billion Ringgit in terms of capital injection.

5. So why should anyone believe that with 100% control Khazanah will not keep on losing.

6. In fact with no one to check and give concerned criticism as when there were minority shareholders, MAS can go very wrong indeed.

7. In true privatisation, fear of losing money on the part of a private owner would force him to scrutinise the management and check the balance sheets frequently. The Government as the owner would be less concerned. The Government is about spending money. Any shortages (or losses) can be overcome by increasing taxes or borrowing money. The way money is being spent nowadays doesn’t indicate the kind of careful financial management and scrutiny that MAS would require in order to turn around.

8. Once when a new CEO was appointed MAS registered some profit. But that was through selling assets. How much more assets can MAS sell?

9. Catering was given to a company with very long term contract and even as MAS loses money the contractors seems to be doing well. A Government company will not be able to terminate this unusual contract. It is too sensitive. Someone might advice against it.

10. People in glass houses should not throw stones. Right. I shouldn’t say all these. I had such a bad record as Prime Minister. But I was ready to resign. And I did. I did because I failed. But no one wants to follow my example.

11. I may be wrong but I think Khazanah’s 100% ownership of MAS will not be much different from its 70% ownership. We are going to see a lot of new people who will receive huge salaries, allowances and bonuses and not much else. That I believe is how Khazanah operates.

Amokh is certainly incompetent. he brings in all his buddies into Khazanah with exorbitant salaries but failed to deliver. A clear exmaple is Harun Johari who is in MAFC. The whole company screwed up under him and here RM 550m of public funds wasted.

Well, Tun Dr M should start by justifying why he decided to privatise MAS to one Tajudin Ramli.

Ah, yes, Tajudin Ramli. Conveniently forgotten and quietly relegated to the distant past, it seems.

MAS veterans know what this phase in MAS achieved.

But that's typical Tun Dr M. His chutzpah doesn't allow him to admit that he too didn't do too well with MAS.

Amokh must be removed. This guy is useless, liar (yes I dare say so) and incompetent. Just look at how he and Khazanah screwed up Medini. Go ask people in Iskandar Investment Berhad on how the Medini Agreement was written. The Arabs and Sri Lankan laughed all the way to the bank.

Amokh and Khazanah boys have zero capability to do anything except melingkupkan negara.

Save MAS from Amokh and Khazanah !!

Exactly, when you already have a 70% majority of a losing business entity, owning 100% of it won't make a difference. What AMokh has done in the past is not "rocket science", selling off the assets of the company to balance the books.
The Government should seriously give thought to what Tun Mahathir is suggesting. We spent billions of Ringgit on "so called consultants", paying a little more for a good one should not be a problem. Act intelligently as you are spending the "people's money"

I totally agree with you 100%. Amokh gemuk is hopeless. His MCOBA gayboys in Khazanah & subsidiaries especially Harun Johari pendek is nothing but syok sender to the max. Harun Johari pendek failed miserably at PTP, IRDA and now MAFC. If you put this super dung at PETRONAS, by 2nd year, PETRONAS also can go bankrupt. Ptui…..

Khazanah will not rip off MAS.
They are just being "clever" taking advantage of the current depressed in MAS shares and taken it private at ONLY RM0.27.
Don't be surprised, after 2 or 3 years and after lots of "massaging" the P&L of MAS, Khazanah will get their Media subsidiary, Media Prima, or other friendly media to tell the turnaround story of MAS. And definitely Khazanah will list MAS in 2016 or 2017 at RM2.00 or above, with some strategic stakes being offered to foreign partner. And when they completed their another "KEPARAT EXERCISE", Khazanah MD (Tan Sri Keldai) will proudly announce Khazanah profit in 2017 surged by 1000%!!! Who knows in 2017 Tan Sri Keldai will become Tun Keldai?
The one that got ripped off is the poor Minority Shareholders that have been supporting MAS for so long. Whether MAS will be able to FLY after 2017 or not is another story.


They may stupid to run Khazanah, but clever of treating like Mak - Bapak dia punya..

If you wanna comment here, watch your language and who you meant it to

I dont even bother reading

The problem with Azman Mokhtar is his circle of advisors - highly rated by him but unknown elsewhere. His technology advisor is of a Walter Mitty character. This guy is a brother of former cabinet minster claimed to be graduated from Oxford, earned MBA from Imperial College and worked in BellLabs, CERN in Geneva and former assistant to a Nobel Prize winner. Unfortunately outside Azman Mokhtar's brain no one know this guy. Yet his advice is taken as gospel by Azman Mokhtar.

Mahathir is right. MAS will eventually become no more than just a Khazanah department selling MAS assets bit by bit until MAS is no more. It is so sad to see our national carrier being stomped into the ground. MAS epitomized the dreams of many Malaysians to see a truly international company devoid of racial and religious bigots flying our flag to all corners of the world. Today Najib & co. is raping MAS while PAS wants to turn MAS into a mini flying Kelantan. To all the Malays who love our country please kick out the morons in Putrajaya and keep away from PAS in Selangor. Let PAS drown in their own filth along with DAP and PKR.

Voice, if Amokh is incompetent, how about Mirzan?

The MAS fiasco brings into focus the role of the GLCs now managed by hugely paid Civil Servants with no accountability, neither owners or founders. As I said before the Government should only rule us and not make money competing with the Private Sector. And it should divest thus.

1. Divests GLCs to new Bumiputras and their non-Bumiputra partners.

2. Divests GLCs to the former owners if they did not break the law.

3. Divest GLCs to the existing Management and their non-Bumiputra partners.

To ape Singapore Inc is WRONG. We are not a RULE BY ONE MAN, we are one of the leading World Democracies. Also, Singapore's reasons for setting GLCs are entirely different from us. We need every drop of money for our OWN DEVELOPMENT and shouls not use our hard-earned money to BOLSTER THE ECONOMIES OF OTHERS like that infamous monopolistic Group. Sheer commonsense !

Amokh and his boys/girls should be 'invited' to run MAS. 3 years to turn it round.

Get down from the tower and start to smell the s*%t that their boys had left in the company.

Maybe even eat some of it too.

And while they are poking around the place, just close Khazanah down. The country can function better without them. Return the assets to MOF.

And to the Khazanah trolls monitoring this, well, up yours. Time is up, get a real job.