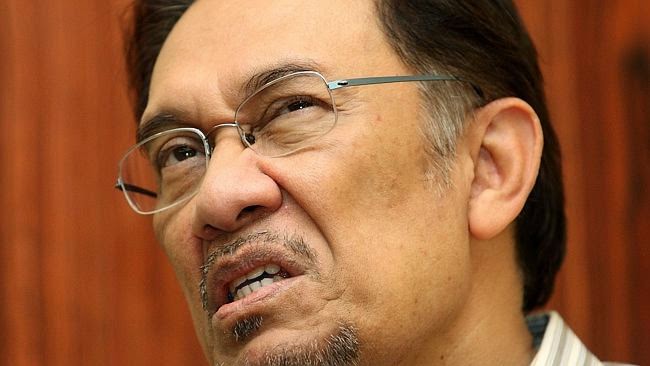 His Highness the Sultan of Selangor is due to berangkat overseas from August 12th to 24th.

From all the moves of Dato Seri Anwar Ibrahim, he wants to get his wife's appointment as Menteri Besar of Selangor as soon as possible before his highness leaves.

Without a royal consent, the state assembly could not convene, the dismssal of Tan Sri Khalid Ibrahim as Menteri Besar through of vote of no confidence could not be done, and planned appointment of Datin Seri Dr Wan Azizah Wan Ismail will not happen.

Anwar had planned to get Khalid sacked by the 10th tomorrow. That way PAS has no option but to accept PKR decision to submit Wan Azizah's name to his highness. However, Khalid has made his move.

His lawyer and Rocky Bru's former lawyer, Edmond Bon has issued a letter of notification to PKR's Disciplinary Committee Chairman. See below: 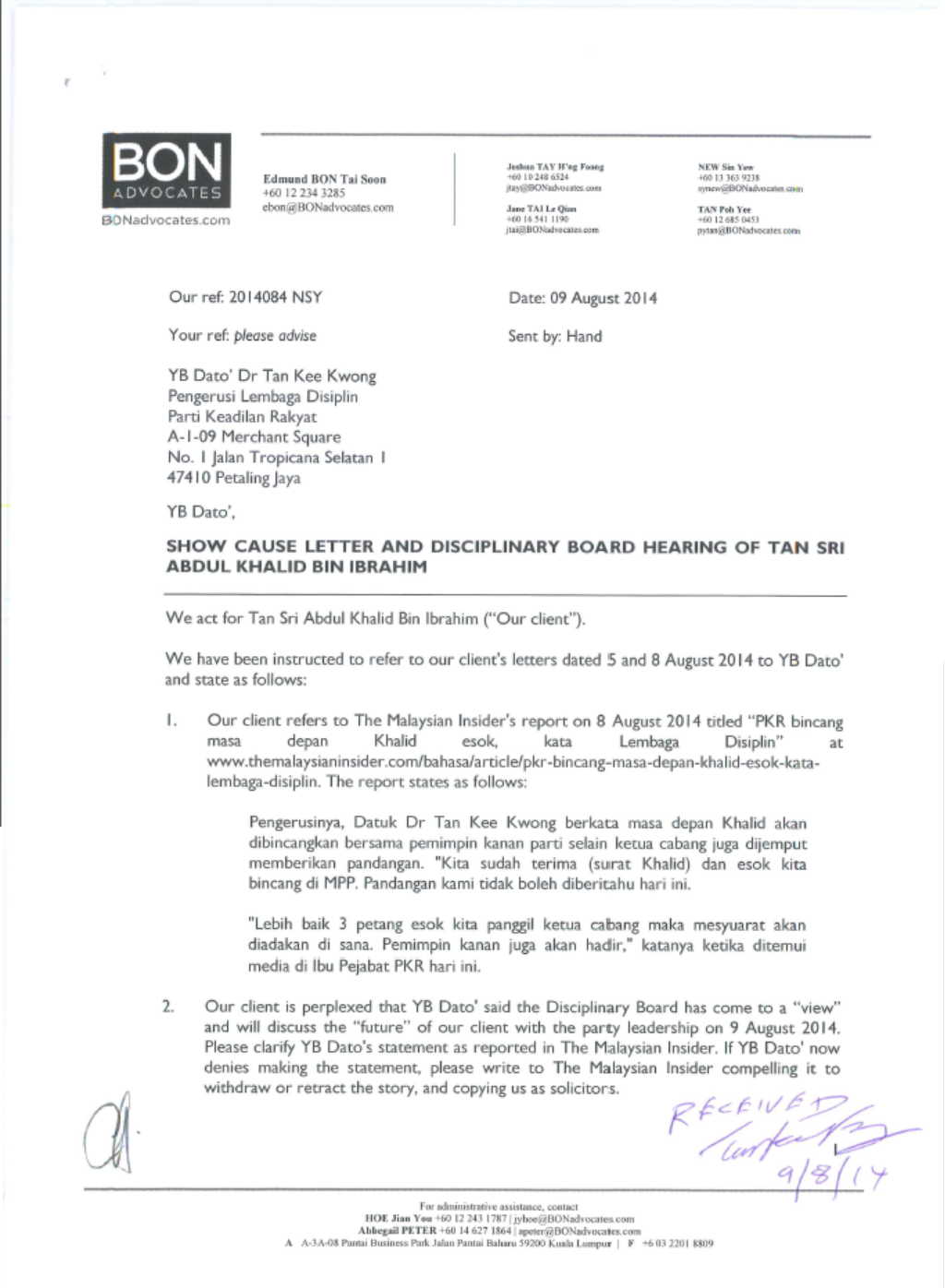 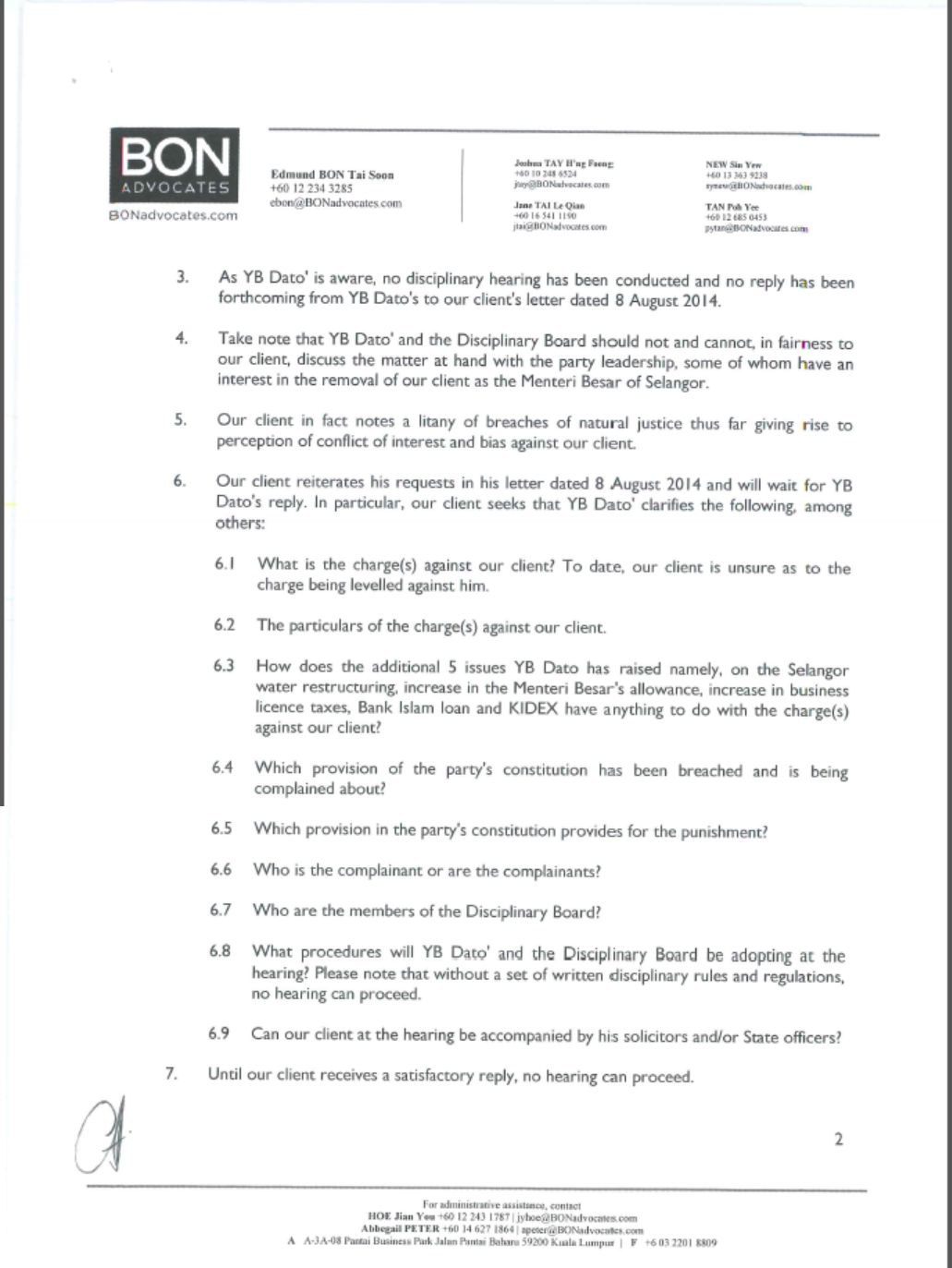 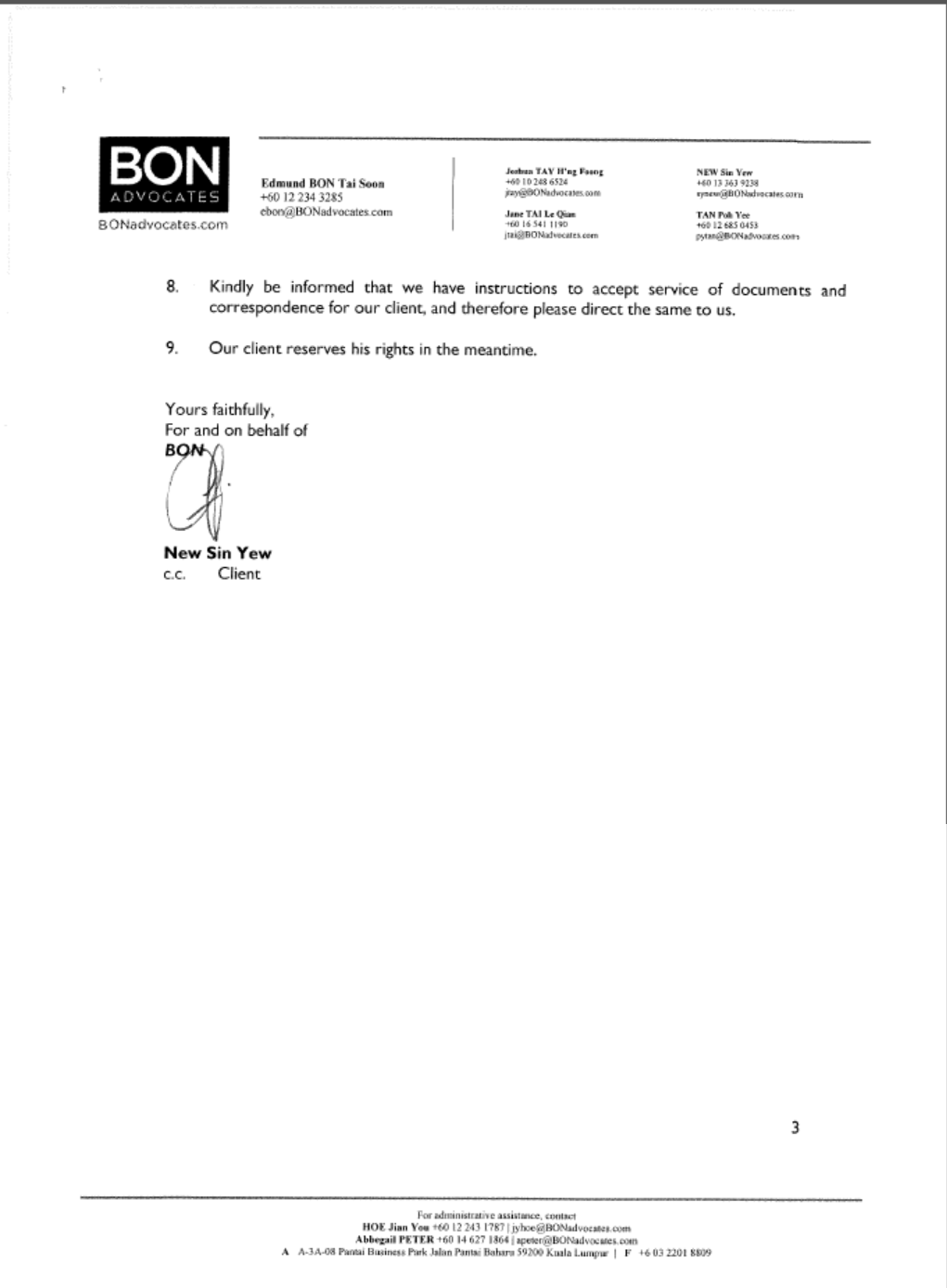 Basically, Khalid has notified the committee that he has a counsel representing him and his lawyer have warned the former Gerakan Minister, Dato Dr Tan Kee Keong that anything you see or issue will be used against you in a court of law.

PKR will hold a press conference on this new development and reporters should ask as to under which law or quote from the party constitution is the current proceeding against Khalid being done.

Why is Anwar rushing if he is not rushing the legal process on his sodomy case but seemed to rush this process to sack Khalid?

Khalid was given a show cause letter. See below: 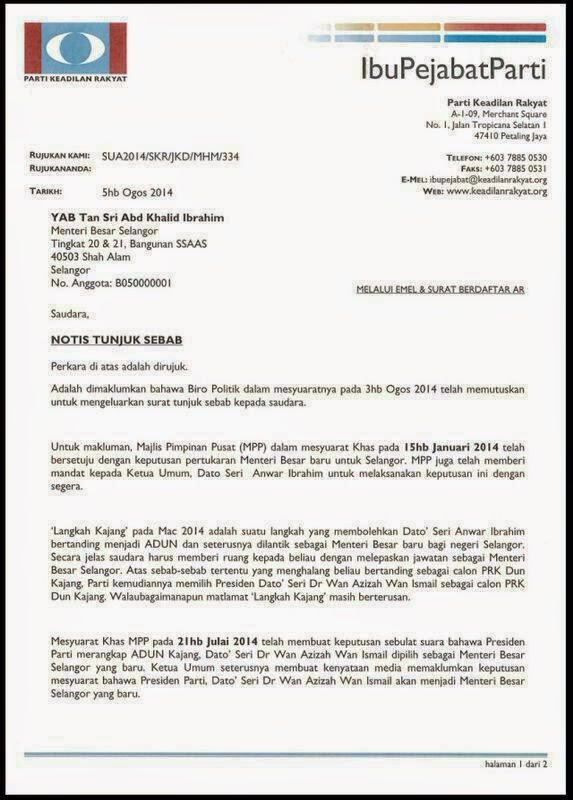 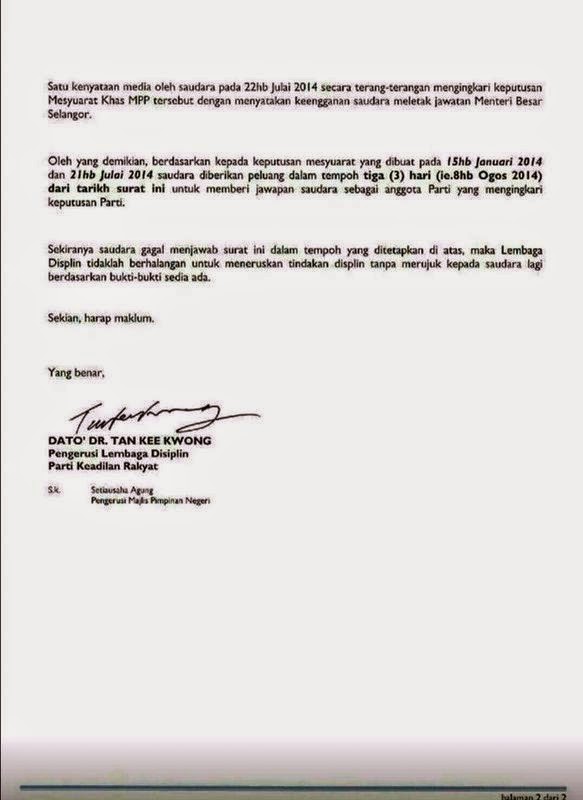 Khalid replied to request as to what was his offenses. 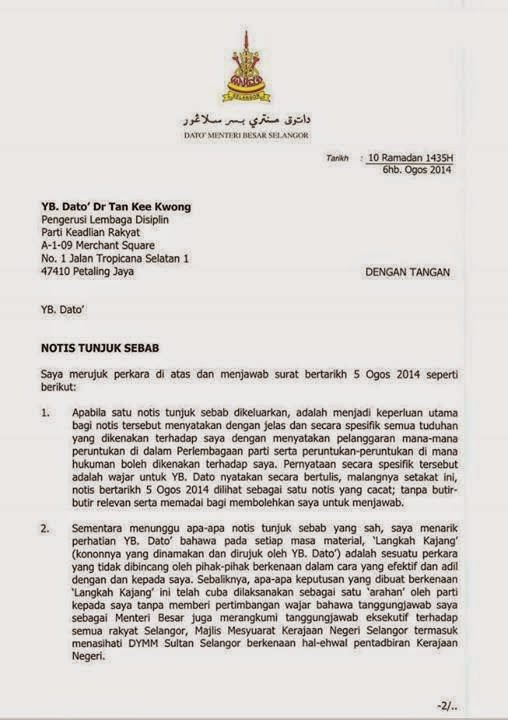 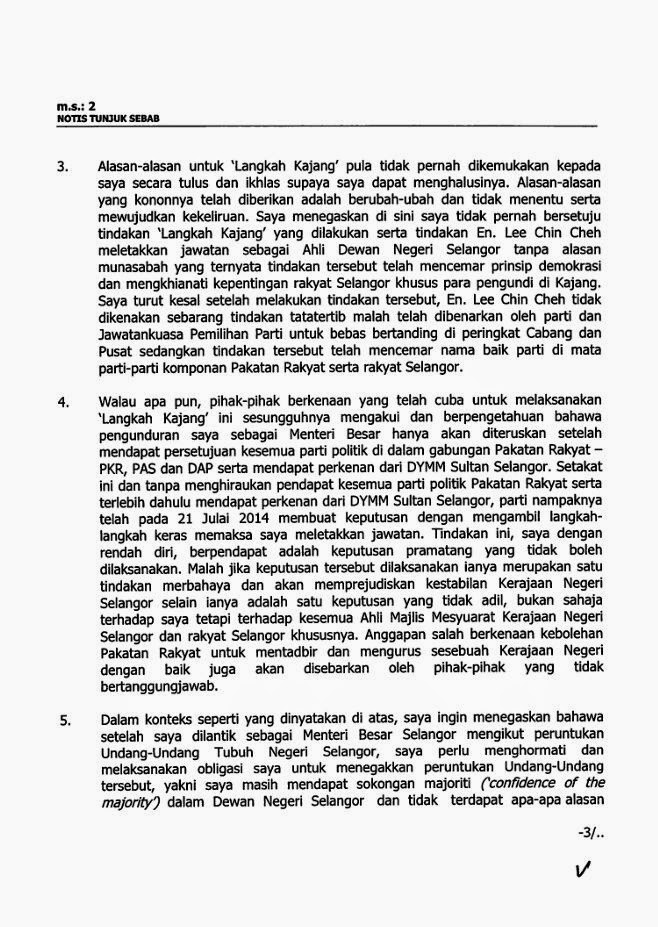 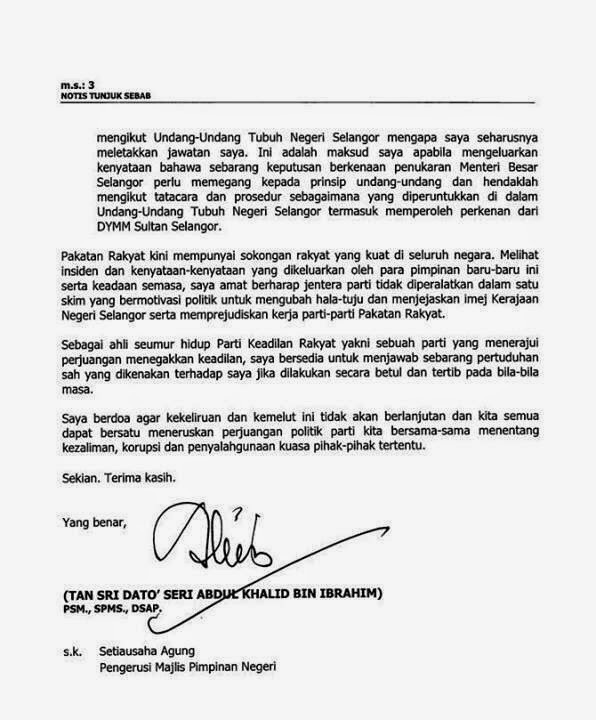 Khalid questioned as to the sudden appearance of 4 more issues. He inform that he will not attend the hearing date set for yesterday and today but will only appear on August 15th next week. 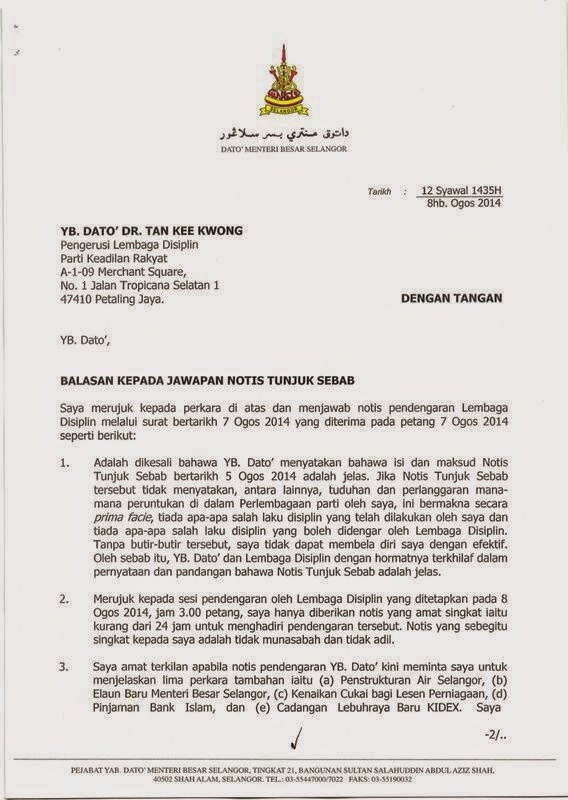 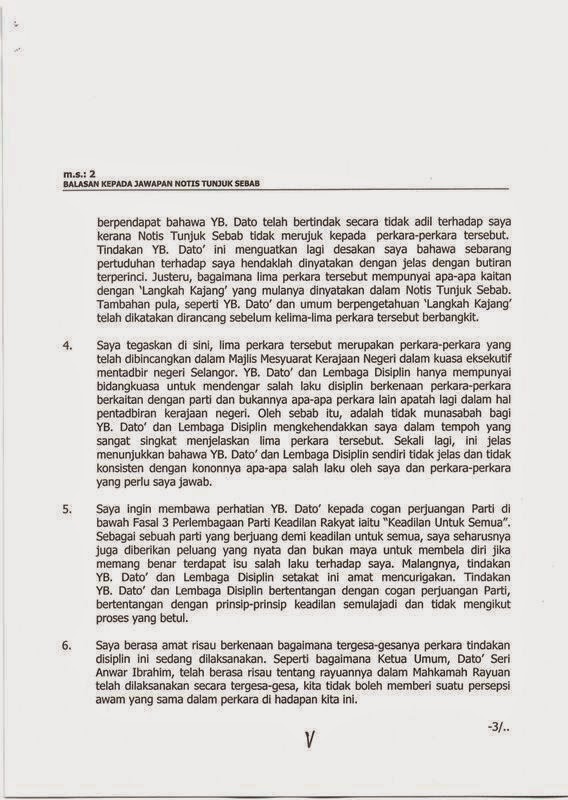 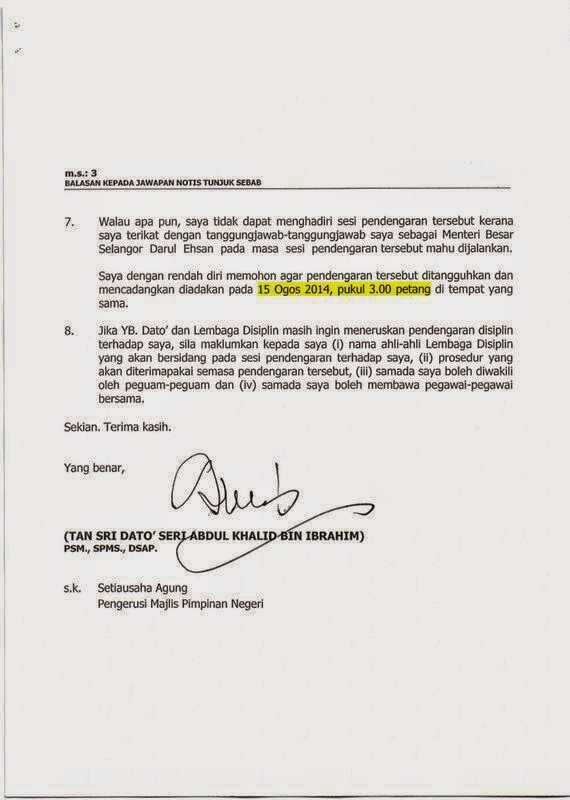 PAS Central Commitee is supposed to meet on August 10th tomorrow but delayed the meeting twice to August 13th and now August 17th after Khalid's hearing.

One will expect Dato Rashid Manaf or Ecoworld will file a similar lawsuit since he was accused of doing the payoff for Khalid's loan with Bank Islam.

The reported amount for Khalid's outstanding is RM67 million but as one former top executive of Bank Islam informed us, Bank Islam had a weak case since they did not apply 'duty of care' in disposing Khalid's shares in Guthrie and the settlement amount could have been only RM7 million.

Mampuslah Rafizi and Saifuddin. Been reading too much ABITW but not reading the cautionary lines.

In the meanwhile, Lim Guan Eng had sued Nasruddin Hassan of PAS who refused to apologise within the 24 hours stipulated period but only gave a reply. Guan Eng has no case against Nasruddin and Nasruddin's statement maybe naive.

However, Nasruddin did not bought into Guan Eng's often repeated threat and it looks like it is Guan Eng have bitten the bait and got himself trap. He will be dragged into other issues.

The legal notification by Khalid's lawyer to Dr Tan may tie PKR's hand. Although Anwar claim to have the mandate from Pakatan Rakyat in which Lim Kit Siang signed for DAP but only Deputy President Mat Sabu signed for PAS, he cannot remove Khalid through party disciplinary process that easily.

The Erdogan's inside PAS which support Anwar have questioned Hadi's position but dare not question Nik Aziz. Anwar reiterate that the two Dewan's position is not necessary because Pas has expressed agreement through Mat Sabu.

Earlier, Saifuddin loudly told PAS to stay off and claim the choice of Menteri Besar is purely PKR matter. In BN, the position of PM may be from UMNO but there is a process to seek opinion and  consensus from BN member parties in UMNO's succession plan.

Since decision in Pakatan Rakyat is based on a consensus, Saifuddin may have over step his boundary. While DAP and PKR may be able to out vote PAS, there is the possibility of UMNO and few assemblymen from PKR and DAP voting against a vote of no confidence.

The implication and possibilities is wide ranging but for the time being Anwar's game was read well by Khalid and he managed to foil Anwar's rush to sack Khalid.

With more time available, Khalid could be calling the shot. It is a contrary view to the common believe that it is done before the end of the month and Wan Azizah will be the first woman MB and a the first sleepy woman MB.

Khalid can go for broke because his still has the card to dissolve the state assembly. This is the possibility which many are also thinking. However, it might not be the case.

Khalid looks to be in the driver seat with Anwar's days as a free man is closing near. Without Anwar, PKR that is still unsettled with party election problem will crumble to pieces. The Erdogan inside PAS may come out to salvage PKR in which PAS grassroot tolerance with them has met its limit.

However, do not hope so much with UMNO. The grassroot do not understand what is happening and leaders at branch and division level are blur.

PKR decided to follow the set target to sack Khalid before the 10th. Wrong call there ...

If they don't, then it could be the signal of a possible break-up of PAS from Pakatan Rakyat.

One possible reason for PAS to reject the decision is that Hadi, Nik Aziz, Dewan Ulamak and Dewan Syura have specified that Khalid must be determined guilty by MACC or other suitable agency. PKR Disciplinary Committee is not.

House Speaker could be in pursuit for an appointment with the Sultan to grace the convening of the assembly to call for a vote of no confidence on Khalid.

Unlike Perak's case, Sultan has no indication to assume Khalid has no more majority support in the state assembly.

Unless PAS, UMNO and those supporting Khalid make statements of support and dismiss the decision by the two Dewan, Sultan could not deny should Khalid request for the dissolution of the state assembly. To be fair, Sultan must allow the matter to be voted.

Khalid could bring the issue of his dismissal to court. Since he is no more a member, he may have lost his locus standi to bring the matter to court.

If the court see it that he has a basis, then the state administration will be in limbo till Khalid's position is sorted out. It might take years or the fastest months.

Will it be over before the month end or will it be a long bumpy ride?

Why not a long one? Then the public can get to know what kind of going on in this PKR runned state government. Then they could see whether what have been said here about Selangor's ruling government is true or false.

Our issues on PKNS is still under lid awaiting further development.

Haji
I would love to see Dsai to hire Edmund Bond to sue Mahathir and Umno for sacking him from his position in the gomen in 1997.

Typical of anwar Ibrahim. Shooting on his own foot. The problem with anwar Ibrahim is he think smart and good at manoeuvre. He failed during his tenor as finance minister.


I love to see Guan Eng Vs Nasarudin go to court. Lets pay lawyer fee for Nasarudin, then request Penang Governemnt to provide all the info about the tunnel tender process and penang's gov account. If Guan Eng dont provide the info, meaning the no justice for Nasarudin, From there we will see whose right... Like you said, Guan Eng is calling new problem.. if he dont sue, people we say he talk only, if sue, then he need to release real info...

UMNO leaders are still wondering what is going on as they are all out there busy 'making money' before PRU 14 which will see UMNO as a history.UMNO Selangor chief is busy breeding prawns that he has no time for politics while UMNO President is busy with his wife.

They failed to see that there are going to be a second round of power struggling.... between Anwar's faction against Azmin Ali team in PKR selangor

And the game will go on until Anwar's faction dictate PKR as what they dream of as what the Lims and Karpals did to DAP.

In politic, everything is about holding the power...

Anwar liwated himself this time....

I guest it is too early the episode unravelled itself.
I bet Anuar will be fool hardy to see the outcome..........see you later

The very rich PKR and lky's aide seem to shoot themselves in the foot all the time. Here are the instances.

1n 1997, if the DPM had taken a busman's holiday, he would have returned as the Honourable Prime Minister of Malaysia. All those events which happened would not have happened.
In 2008, if the 32 seats were sorted out BEFORE and not AFTER the General Election, they would have won 2 General Elections by now. They forgot it would have cost them nothing as they would have controlled the Khazanah.
In 2013, if the duo declared a 100 day fast from the lst Class Ward of the KLGH and boycotted the
13th General Elections, they would have been in Putrajaya already for 15 months. SEE HOW THE THAIS DO IT !
In 2013, if nepotism had been practised and the MB of Selangor appointed accordingly, where is the CRISIS today.

WITH SUCH FUMBLING AND BUNGLING, THE DUO WANT TO RULE OVER US ! Acheh !