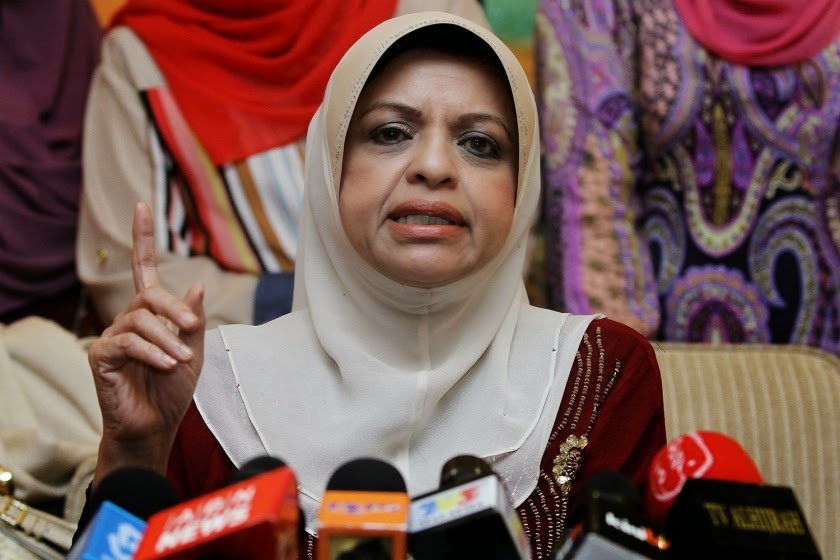 Wanita UMNO has taken a position on the Sedition Act and will be launching a 1,000,000 signature petition drive to get support through their 19,000 branches.

This is a giant step for the pro-Sedition Act movement. It also marks a big step for Wanita Umno to take up other public interest issues over their usual bread-and-butter issues on woman, family and welfare. It is a positive development to see Wanita UMNO embrace Najib's transformation in the area of advocacy.

Like it or not, Malaysia is moving towards a more participative democracy and the phrase of "government knows best' is no more relevant in this Internet age openness.

Unless one's voice is heard and articulated well enough to attract sufficent public support, no point complaining and sulking that government did not give them their due consideration. "Kalau Melayu mampus, terimalah akibat dari sikap berdiam dan terima buta saja pandangan atas."

However, one can expect that some political low life will re-interpret this development with a political twist not even worthy to be called a conspiracy theory. It is the usual plain shallow grassroot level power game political analysis one hears ever so often in the coffee houses and warongs frequented by UMNO members.

The event yesterday as reported by NST today: 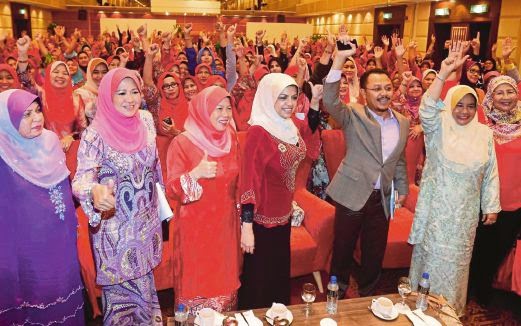 KUALA LUMPUR: THE government should not go ahead with the plan to repeal the Sedition Act 1948 until it holds more discussions with all concerned parties, including Wanita Umno.

The wing’s chief, Datuk Seri Shahrizat Abdul Jalil, said the party would send a memorandum to Prime Minister Datuk Seri Najib Razak to ask for a deferment in repealing the act.

“Many have come to us raising their concerns and anxiety regarding the situation in the country.

“The act must not be repealed to protect the people for the sake of national security and harmony and I believe the issue of peace and safety goes across all religions and races,” she said, adding that the memorandum would be handed to Najib after he returned from China.

She said it was important that the government took into account the views of everyone.

“They (the government) must listen to the rakyat who fear for their safety and peace in the country.

“The women in the country must also be consulted and our voice cannot be ignored in this,” Shahrizat said here, yesterday.

The arguments for and against the Sedition Act is a case of national security versus human rights and civil liberties.

ISA was abolised based on the argument by some of our Ministers that communist threat does not exist. Not known to many, former PKM members are now regrouping. Heard there is a reunion dinner at Chai Leng Park in Seberang Perai at the end of the month.

Immediately after the abolishment, there was three months of underworld gang war. Underworld and subversive activites including the latest IS cells flourished. Law on public order and police are not respected and being challenged.

Najib must take extra caution before amending and repealing the Sedition Act, Printing Press Act and other laws. 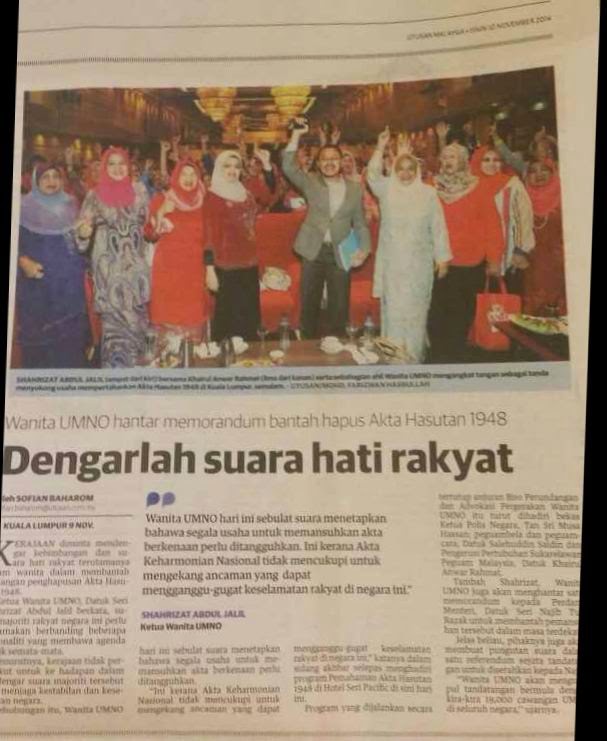 In addition, there are many liberal sympathisers and subversive operators hiding inside government and GLCs that are pursuing human rights agenda and taking advantage in any loosening up from the Government side.

For instance, it felt strange that the picture and report by NST is mild and tone down when compared to Utusan Malaysia's picture and report here. Which page was that report published in the light of the Cameron Highland environmental "disaster" taking centre stage?

Only on Saturday, NST published a report by the same reporter which quoted a Human Rights Watch lawyer, Nizam Bashir (see below) and the editorial gave it a good positioning. 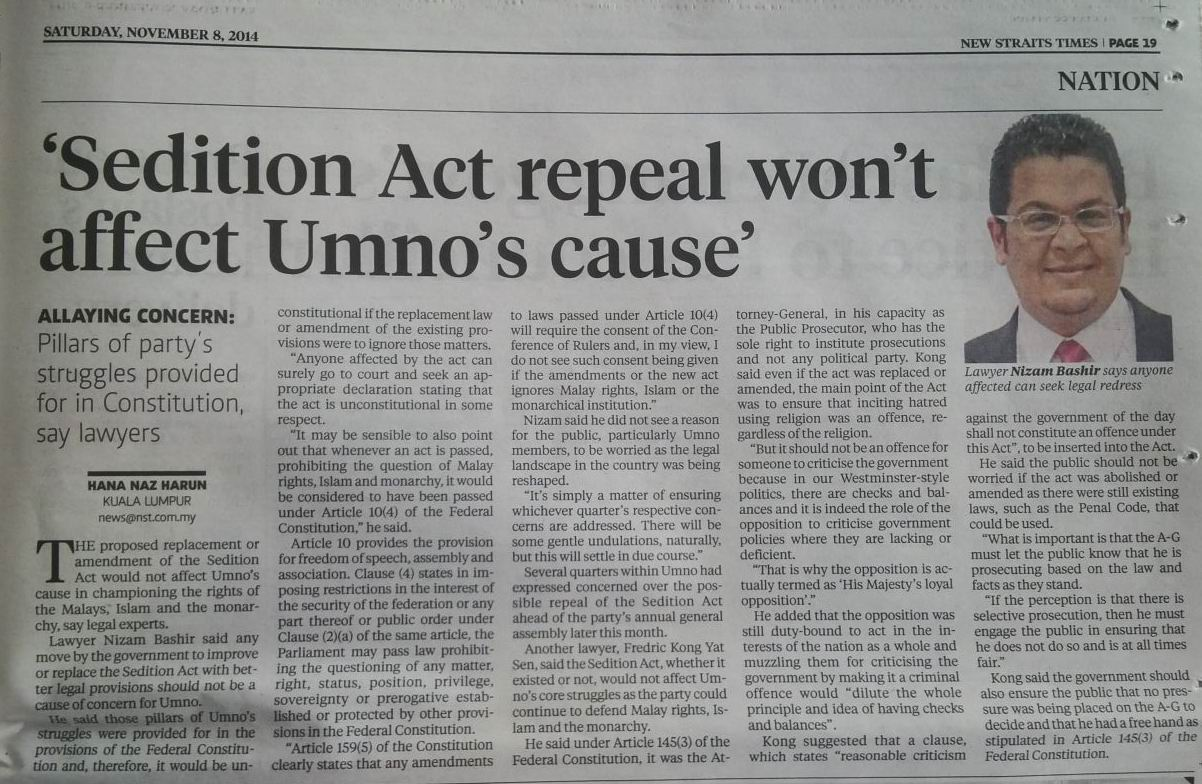 Notice they mentioned of clauses on Fundamental Liberties in the Federal Constitution without highlighting the exceptions in the name of public order, stability and security. [Re-read our earlier Saturday posting]

Nevertheless, it is heard that NST editorial encouraged pro and contra views on the issue. Not so much Tan Sri Johan Jaafar's son is a Committee Member of Bar Council and a strong advocate for repealing the Sedition Act, in words and spirit, but would the GEIC not swing to save his former and still boss's face?.

It was during the rounds of the UMNO Divisional meetings that some 120 UMNO Divisions made a resolution to retain the Sedition Act. This is in contrary to Dato Najib's repeated commitment to abolish it. With Shahrizat and Wanita UMNO's support for the Sediton Act, it will only gain further ground within UMNO.

Political speculations will intensify as Tan Sri Muhyiddin also made his position known on the Sedition act [read MMO here]. There will be the revival of the old conspiracy story that Muhyiddin is out to topple Najib using Tun Dr Mahathir and Tun Daim. 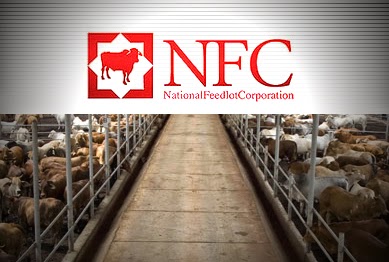 It is no point to dwell on the same old conspiracy. Repeating the same answer to the same bunch of people who will never believe it is pointless. There is more fun in discussing over a new conspiracy theory that will definitely be brewing.

In a written reply to a question by PAS's Khalid Samad on NFC last Wednesday Nov 5th, Dato Seri Najib Tun Razak said in parliament that government will revoke the contract of NFC for failing to repay the RM250 million loan. [Read in Astro Awani here]

This is not the first question on NFC by the opposition so keen on sustaining the issue to weaken the spirit of the mighty Wanita UMNO campaign machinery. On Oct 23rd, Najib had replied to a Tony Pua written question to explain that the deal to sell NFC to a Japanese company local subsidiary, Kirimitonas Agro Sdn Bhd was off. [Read here on Yahoo]

The questions were on NFC but the opposition's intention was directed at Shahrizat husband's NFC Corp.

Datuk Dr Mohd Salleh Ismail explained that RM74 million infrastructure development was meant for NFC and not NFC Corp. He highlighted that Auditor-General Tan Sri Amrin Buang had clarified in 2012 that AG report 2010 never described NFC as being “in a mess.” [Read on in The Star here]

NFC created controversy when PKR's Rafizi Ramli alleged that the company had used the government soft loan to buy a high end condominium in Bangsar and it became an election joke in 2013. It is unethical to misuse the fund not for it's intended purpose.

Banks would control loan disbursement to ensure monies are disbursed for it's intended use. But why was MoA or MOF lax on this? The MoA Minister of the time was Dato Noh Omar and MOF was former PM Tun Abdullah Ahmad Badawi.

The Star reported that NFC could not possibly pay the loan because the monies was frozen and kept with the Accountant General. Furthermore, an important part of the agreement between MoA and NFC Corp was for government and NFC to build the abbatoir for NFC Corp and other participants use. [Read The Star here]

The government may well lose this case because they had freezed the account and given the events that have passed, they acted too late.

Message going viral answering for the government side claimed MoA held back because they saw not many cattles brought over from Australia. Surely no operator would be dumb enough to bring cattles first and bear the cost of keeping them alive when the abbatoir is not ready.

Basically this will be messy.

In the first place, Tun Abdullah should not have awarded the privatisation to Salleh. Despite Shahrizat had nothing to do with any decision made or as she claims it, she was not involved, it was an ethical and a political no no for spouses of Ministers to be awarded government contracts. If husband insist, how is the wife to resist?

Secondly, Salleh neither have the technical nor the managerial expertise. There are many others more capable to undertake the privatisation. Most likely the capable ones neither have nor access to capital. Tun Abdullah era was the transition for a policy to consider financial capacity before Bumiputera was awarded government contracts.

Thirdly, as was mentioned before in this blog, it was a wrong business model. Malaysian cookings hardly distinguish between the better quality parts and the lesser ones. They should have opt for a high technology business model than this old fattening business model.

One industry source claimed Salleh developed the business from the working paper of someone in the industry but that partnership fall out. There was also a long running rumour but had died down that  several people wanted to "pow" NFC Corp for money, or equity or political fund. But it is all talk. 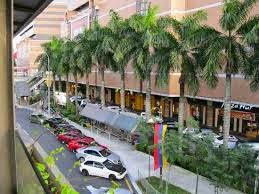 Despite the brave effort by Wanita UMNO to raise their political maturity, the general political immaturity will continue to persist. Kuala Lumpur can have world class infrastructure but Malaysian political maturity is no better than Papua New Guinea and Timor Timor.

Some political low life or "ulat politik" would analyse Shahrizat's latest stance on Sedition Act as a proxy fight for the legal issues faced by NFC Corp. These political runners looks everything from a political angle. It is difficult for them to see events as independent of each other.

They can't be blamed because that is the same attitude demonstrated by the leaders. Both Pahang MB, Dato Adnan Yaacob and Selangor UMNO Chief, Dato Noh Omar in their reactions to Utusan's report on Cameron Highland and Tun Mahathir's comment on UMNO Selangor, respectively took it as a conspirational power play to topple them.

Wait for Utusan tomorrow. It will get hotter before any chance of defusing.

Indeed there was a political low life that first made such speculation. Only it was not from within the UMNO side but PKR. It was Tian Chua's Malaysian Chronicle [read here].

PKR was the torch bearer in confusing the public from the real issue in hand with their accusations and speculations. They are still at it. One pro-Najib news portal - heard to be Omar Ong - spin Najib's reply as government redeeming past action on NFC [read Rakyat Post here]. Rafizi was quick to deny [read Rakyat post here].

Rafizi is still facing several court cases related to NFC including one for BAFIA and more   defamation lawsuit to come from Dr Salleh side. Shahrizat had opt out from suing Rafiz and left it to Dr Salled to spend his days in court.

It was a political mistake for Shahrizat. It does not buy time to simmer the negative perception on her. For that, someone up there may see her as ripe for slaughter. Off course it is another conspiracy theory.
at 11/10/2014 01:56:00 PM

If the grassroots UMNO members know that the PM is being manipulated by his "advisers," why not go for these hawks instead of PM?

'Cause you know, by the time PAU comes around, "capital" has been injected in each divisions & everyone will be joy and merry!

Neither Muhyideen nor anyone is out to topple The Clueless. The joker just keeps on slipping up with his merry consultants applauding hahahaha Malaysia deserves much better lah!

Quote A Voice of no direction, "former PKM members are now regrouping"

Wild silly imagination at best. Indeed all former PKM members are now regrouping in the other worlds. So be prepared to fight them with sedition act especially when they all possessed long fingers as well as being invisible.