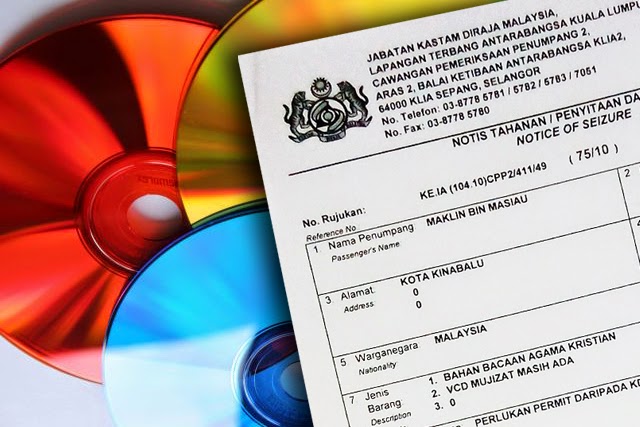 DAP is in the midst of an onslaught on AG, Tan Sri Gani Patail and Minister in the PM Dept., Dato Nancy Shukri to pressure for the prosecution of Dato Ibrahim Ali. The motive is not to have Ibrahim prosecuted, but to seditously burn the religous sentiment of Christian Sarawak voters.

The case is weak but the weaker the case, the easier to up the dissatisfaction of the Christian majority in Sabah and Sarwak against the government led by Malay Muslim in Semenanjung. An incident at KLIA 2 recently gave them the oppurtunity to play up the Christian sensitivity in religiously tolerant Sabah and Sarawak.

However, the link and questions surrounding the incident points to a set-up. Despite government getting blamed for conspiracy against Anwar, this attempt is a cnspiracy against government. It is a set-up seemed most likely linked to PKR and STAR.

Maklin was on a stopover in KL from Medan heading for Kota Kinabalu airport. His luggage of Christian paraphenalia was meant for the upcoming Christmas celebration. 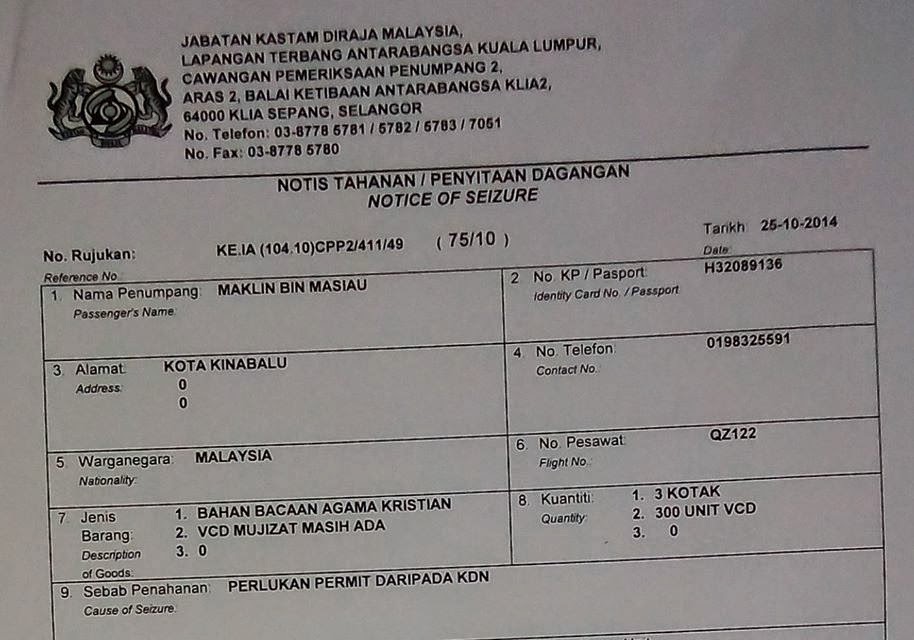 The incident was immediately uploaded by Maklin on his FB [here dated Oct 25th] and picked up by an expectedly friendly blog [here dated Oct. 26 here].

The above is the notice of seizure. He seemed prepared to viral his case, but it is normal for bloggers, FBers and media people. However, is it for a Pastor?

It was Malay Malay Online that first made a report on Oct. 30th [read here]. The report was only based on an unnamed source.Who could that be?

The standard pro-opposition propaganda Modus Operandi is to have other pro-opposition media - MI, FMT, Mkini and other blogs - spread the news and followed immediately by comments from PR leaders to make it viral.

Naturally, The Catholic weekly, Herald issue, in which the last episode was exactly one year ago, was revived. They used the opportunity to remind KDN to return seized material made in 2008 [read FMT here].

One of the early respondent was YB Dr Ong Kian Meng, dubbed by Helen ang as part of the Evangelical hidden hands in DAP.  He linked the incident to the much talked abut 20 point agreement of Sabah [read MMO here].

Pastor Maklin may have picked up the same point to say the same later [read MI here].

If only BN media and propagandist could see how predictable their methodology is, they could device a method to counter allegations and viral issues strategically.

Alas the comments with political implication must be that from BN's PRS President Tan Sri James Masing. He has a historical past with an Iban nation ambition and the present undercurrent in BN Sarawak politics involving PRS, SPDP, SUPP, Teras and UPP [read MI here].

The infamous Bintulu MP and stranded President of SPDP, Dato Toing had his former President and many of his "wakil rakyat" off to Teras.

The advisor for Teras and SUPP's former taiko, Wong Soon Poh is leading a party expected to brings in the influential Foochow members of SUPP.

Not to be left out is comment by another Minister in the PM Dept, infamous for the controversial NUCC, Sabah's Tan Sri Joseph Kurup. He is a lucky survivor of Sabah politics but could never be trusted.


The official communique from Home Ministry today raised a suspicion. Quoting from Astro Awani report [read here] is the following:


"Usually, for items on transit, the baggage will be transferred into the aircraft directly without the need to bring them into the main terminal.

"In this regard, a detention letter to review the consignment was issued to the carrier to ascertain if the publications were actually being brought to Sabah."

Why would Maklin take the trouble to check out and re-check in 574 books (133 titles), 419 CDs and five DVDs at KLIA2? The story must be better than just blaming and belittling Air Asia because Maklin's description in his FB smells of over acting.

Maklin was given a detention order on Oct 25th to review the large consignment. MMO report today [read here] from Bernama mentioned:


The seized books, CDs and DVDs were handed over to the ministry on Oct 27 and the letter of detention to review the consignment was dated Oct 27, 2014, it added.

The statement said a review found the publications seized at klia2 containing the word “Allah.”

“On Friday (Oct 31), the ministry checked the consignment with the bearer and it was explained that the materials were brought to the main terminal as the carrier needed to check-in the baggage and flight to Sabah.

“Initially, the bearer said the materials were for his personal use but he later said they were for use in a church in Sabah,” it said.

Who would not check? 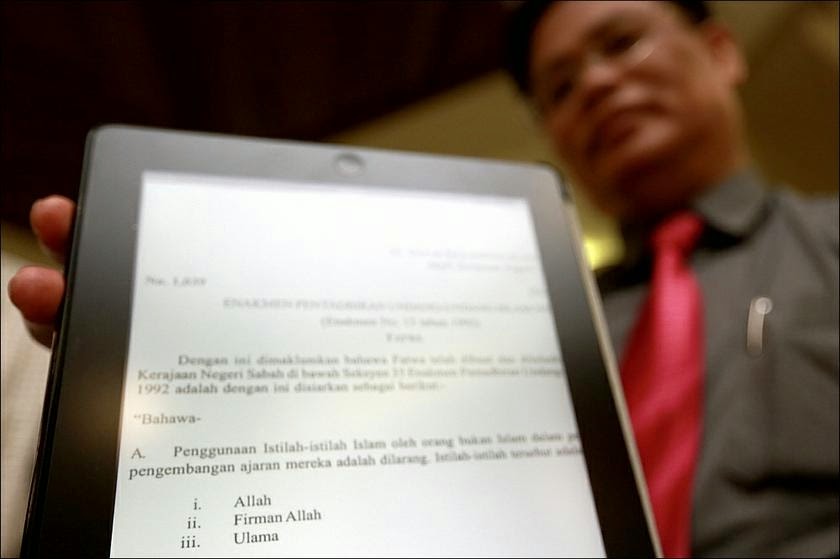 However, why would Customs be so obtusely stubborn despite his justified explanation? Home Minister Dato Zahid Hamid blamed on the poor judgement of the Customs [read MI here] but there is no need to say Customs falls under the jurisdiction of Ministry of Finance.

Still, there is something more sinister than Custom's poor judgement. They may have been in the know of the content. Maklin brings the content to them and they seize it accordingly.

With many government officers inside are mole for the opposition, it can't be ruled out that the Custom officer are moles for opposition. It is an act of sabotage to make government look bad and fire up the anti Semenanjung Malay Muslim among Sabah and Sarawak voters. 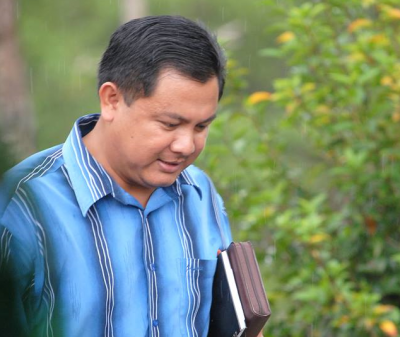 A quick search reveals that Maklin ran under the banner of STAR [read here].

STAR is lead by Dato Dr Jeffrey Kitingan who has an obsession to take Sabah out of Malaysia.

He is willing to work with any party to achieve their Borneo Agenda. That explains for Maklin quickness to linked the issue to the 20 point agreement.

However, Jeffrey's Borneo agenda is for cessation. In the past, it only prevail in Sabah. This time via United Borneo Front, it has spread such thoughts into Sarawak. 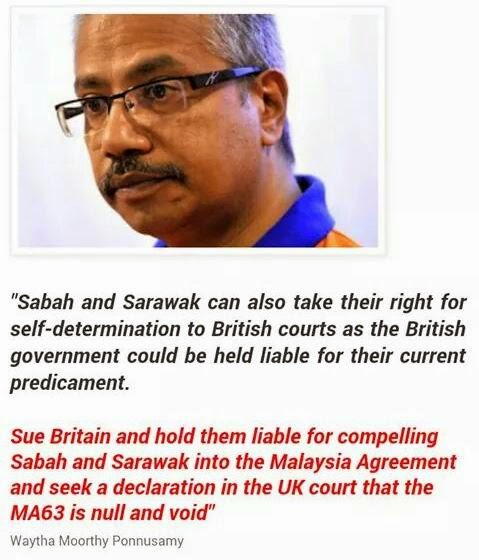 One keling batu api is Hindraf's Waythamoorthy himself who advised them to raise the issue to UN. There is also Ambiga, Harris Ibrahim and all 6 Bar Council lawyers activist.

It is one convenient way of weakening BN in Sabah and Sarawak. Another is to stir up Christian religous sentiment.

The more suspicion that the Maklin incident at KLIA 2 is a set-up.

In the meanwhile, splitting up East and West Malaysia has been long been suspiciously anticipated as the covert work of the US for a strategic positioning in the South China Sea. China's ambitous 10 dash line plan is making them nervous to see the international South China Sea lane fall into China's control.

Jeffrey may have left PKR but he and Anwar Ibrahim have long been strange bedfellows. Jeffrey wants Sabah out of Malaysia and Anwar wants to suck the American toe.

For Anwar, first must be to weaken BN's fixed deposit. Thus, PKR voices can be heard too [read MI here again]. Interesting that Baru Bian mentioned "a calculated intimidation" by Customs. Still wondering who was the unnamed source that alerted MMO when Maklin was reported to refuse from being contacted.

The stench of a set-up reaches to high heaven but there is no more ISA to stem the subversive going ons. Whose fault was that?

thats why ISA and seditious act still needed,no matter what the western, DAP and cohort say it is an archaic law.

The western country and media were also playing their part go here;

look how coordinate their effort,

If the western country think about humanity, freedom and democracy why dont they look or train their gun at the Arabs or china?

Dont think Najib have strategic thinking, he only know how to kow tow, subservient to the west and its lapdog.

the best solution is, throw this subversive, agent provocateur to a detention center under ISA or Seditious Act law, yes this archaic law that have proven time again to maintain peace and harmony of this country.

If you look at Sabah and Sarawak, how many ethnic, tribe,religious were there? do you think all of them have a common cause? will fight for independence? do you think kadazandusun will agree for a murut or bajau ethnic were their leader? even a kadazanduzun have a sub tribe, they will crush each other in fact sabah or sarawak will be separated, divided further apart!

do you think they have a common cause? who is the actual agent provocateur there? Yes the answer is the DAP, Anwar Ibrahim for his pursuit as the Prime Minister agenda and the fact it is the chinese community using christianity as a tool, they will do the same as what they did in tanah melayu using communist ideology.

And thats why ISA and the seditious Act law still needed!

In order to sign MUSTA, one of the two requirements set by the us was for malaysia to abolish the ISA. jeng jeng jeng...

Weak leadership ,was the problem , and the problem will continue to non stop ,until UMNO is bold enough to defend what they rightly should be defending.

Bro , I am not pro Najib in the

true sense of the word

but I worry that the mat wworking

as 'opiser' in his admin will

help the cause of the break up of

Sabah from our great nation

Malaysia. The update to the

'rampasan' episode is the bibles

and its accessories had been

reported by a blog an hour


What worries me is not Najib or

but damage will be done when

Najib's macai fall for the

'wayang ' put up by the Kittingan,

quite fast and did a good

More 'wayangs' will be carried out

by the sly kittingans and

bastard will come into play.

While I despise the Umno goons on

for the pleasure of the

ruling elite , there is a need for

melayus to gather and support

the nation of 1 Malaysia!