Open tender for petrol system but not diesel? 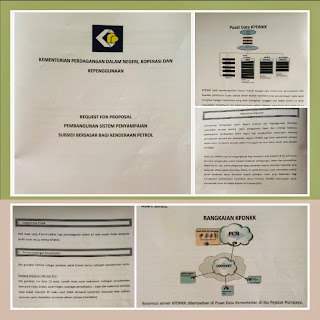 The controversy surrounding the fuel subsidy rationalisation system should end. There was an open tender done. A request for proposal was send out.

Some 95 companies expressed interest to be invited to submit proposal. When KPDNKK held a briefing session, some 50 companies were present. The submission dateline was 12:00 noon on November 10th.

By right, one can comfortably say the earlier controversy surrounding the fuel rationalisation system tender has ended. Unfortunately, not quite.

The tender date is closed but for what tender? 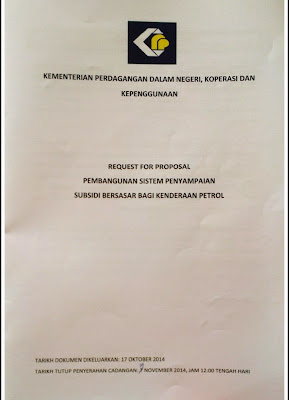 The cover page reads as document for tender for system for subsidy rationalisation for petrol, precisely intended for Ron 95.

New petrol rationalisation system is planned for commencement in May 2015. However, it was announced that the new subsidy rationalisation for diesel will begin in January 2015.

Thus far, no date and ongoing tender process heard except the earlier supposed invitations with Datasonic dominating media attention. Hope someone could shed some light on this.

It was told to us by a little bird from inside KPDNKK that a company was somewhat recently awarded the contract. Somewhat means there was a conditional letter of offer issued by a new unit inside KPDNKK dedicated to manage the fuel subsidy program.

One condition was to make a decision and confirm within 2 to 3 days. Another condition and a strange one indeed was a request for silence in view of the recent bad publicity pervading the development of the fuel rationalisation system.

The source said the company getting the offer sounded like Inter Access or Inter XS or Inter Ax S. The meeting point was held in a dark, smoky and noisy bar so the little bird's chirp was muffled by the awful live band.

What could be clearly heard was the letter was issued at the instruction of the KSU. There is no Dato Hasan Malek involvement or any other politicians.

Till new information surface, the assumption now is that the Minister is not in the know, It involved those who usually sign off their letters as "Saya yang menurut perintah" but decision and directive was given by them.

If true, it is disappointing.

Just when it was thought that there is no such suspicious dealings linked to politicians, there is now the suspicion that some senior civil servants are lining up their retirement nest with hay made while the sun shine.

Off late, there have been many nonsense by civil servants. They do all the shit but it is the ruling parties that get the blame. Are the rulers listening? Or politicians will just conveniently do a stunt to take potshots at Utusan Malaysia to cover-up.

It is somehing for the other brick in the wall to look into.

According to reports, some petrol stations in Johor are already selling Euro 5 diesel to lorries ferrying goods to Singapore.

This is because Singapore has made the use of Euro 5 diesel mandatory for all diesel-engined motor vehicles operating in Singapore.

Including buses and lorries from Malaysia. No buts, no exemptions and no ifs.

See, it's so simple.

And yet the government dithers about making use of Euro 5 diesel and patrol mandatory in Malaysia.