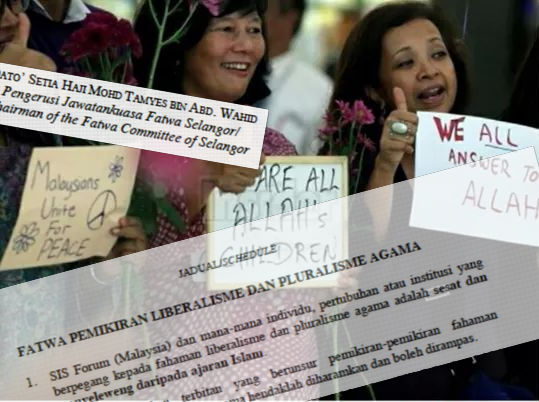 The Fatwa Committee of Selangor announced their July 14th, 2014 fatwa that SIS Forum (Malaysia) Berhad or usually referred to as Sister in Islam (SIS) is deviant and has astrayed from Islam.

In other words, they are sesat.

By right, Sister in Islam should be abbreviated as SII. Now it is clear why they referred themselves by the acronym, SIS. It is only appropriate.

Islam does not have a hierarchy like Christianity does, but like any religion, the authority lies with the learned elders.

Although the Sunnah Wal Jamaah, or Sunni in short, practise consensus through such institutions as Fatwa Council, those without knowledge and do not diligently practise Islam could not be accorded the authority.

Religion is not based on democracy but authority of knowledge. The religious authority is only encouraged, but it may not be necessary, to engage such deviant groups, especially the steadfast and stubborn like SIS.

In reaction, former SIS President, Zarina Anwar filed for judicial review in court. It means they are seeking a civil court to overturn the decision by the state Fatwa Council through a judicial constitutional review.

It is a futile attempt and she is bound to lose.

Will it mean a non Muslim judge will overturn a fatwa ruling by learned Mufti with knowledge and authority? It does not make sense.

Islamic religous affair falls under the jurisdiction of the Syariah Court that was provided for in Article 121(1A) of the Federal Constitution, to deal with matters of state Islamic law. And, Syariah Courts does not merely deal with family law.

Islam is specifically mentioned in other parts of the Federal Constitution such as Article 11(4) on the restriction in propagating of other religions to Muslims; and Article 12(2) allows the federal and state government to assist Islamic institutions. This include funding for Islamic schools, which is of a higher priority for funding under the constitution than Chinese school.

Sibu MP should understand the Federal Constitution before making the false accusation that Islamic Schools promote racism. It is not a racial based school system, like vernacular schools, to be accused for such. Surely Bible School has no relation to any race.

Islam is the religion of the majority and it's institution are empowered under the Constitutions. The institutions provide for structure and consistency in the practise of Islam in Malaysia.

The Fatwa Council is there to address issues on matter of hukum or others ambigious religous issues. In the issuance of fatwa it has to be based on clear references to the Quran, Hadith and ulamak interpretation as stated in accepted kitab. Mufti is empowered to issue fatwa. He is appointed by the ruler from among those conversant and knowledgeable on Quran, Sunnah and various branches in Islamic knowledge.

Surely interpretation of Quran is not as simple as literal translation by some former banker, who takes up Arabic lesson and simplistically rejects the sayings of the Prophet, while silently amongst his social media group, insult and demean the Prophet. An important part of faith is the belief in Prophet Muhamamad. Disrespecting the Prophet is similar to disbelieving the message brought by the Messenger of Islam from Allah.

Fatwa Council have important role to play for the Muslim public in providing clarity, uniformity, settlement of differences and dispute, unity and brotherhood (or sisterhood), gazetting fatwa into law and regulations, and point of reference.

In Malaysia, the majority of Muslims adhere to Mazhab Shafie. However, other Sunni Mazhabs are allowed. So does certain Mazhabs of Shia and acceptable Sufi teaching. One has to be learned and understand the any other Mazhabs and groups in Islam.

The Fatwa Council have authority, both knowledge-wise and power-wise, to announce certain teachings as deviant as the case for Liberal and Plural Islam being spread by groups like SIS, IRF and etc.

Liberal Islam are Islamic teachings that have been adulterated by liberal western psychology that they seldom negatively perceived and criticised the traditional Islam practices as backward and old fashioned using a western frame of mind.

The western liberal thoughts can be oftenly heard as expresses in their openness and their version of a more progressive Islam. Partly, it bores out of their inferior complex from the western education or living experience.

Most of the time they fail to learn and understand Islam's own thinking and philosophy on any matter of discussion and seek a simplistic explanation based on their own derived logic.

While, Plural Islam see all religion as the same, which is heretic in Islam. The statement of faith says no religion but Islam, Muhammad is our Prophet but Plural Islam see nothing wrong with adapting to other religions' practises.

They claim it as diversity but Islam's has it's own diversity to enable adaptability. Not the unbridled diversity they yearn. Islamic diversity is on matter of ritual and practices but it strictly preserve aqidah (faith).

The recent rejection of Indonesian Islam Liberal thinker Ulil was also an example of how gullible Liberal and Plural Islam followers are. The person fake his Phd when he hardly has a first degree.

While there should be room for independent thinking and self review i.e. ijtihad but not by ex-banker or ex-reporters or sociology Phd holder or lawyers, who hardly adhere to the 5 times a day or other practices in Islam.

It is one thing to not practise Islamic rituals but it is something else to start saying what others are doing it wrong and trying to propagate it.

For that matter, sufi practices that is so lax in their prayers, fasting, ibadah and avoiding the forbidden could be deviationary. Allah is a loving god but other chacteristics of Allah can also be found in the sifat 20 or Asmaul Husna (characteristics of Allah).

It boils down to knowledge need to be practised. How could one be doing a review without first embodying the religion into one soul. Unless one practises Islam, only can one embody the spirituality of Islam and develop on existing body of knowledge and practices.

Those doing self interpretion or learning without a guru (teacher) will end up being misguided.

Knowledge need to expand and past mistakes should be corrected but not by sweeping observations without in-depth understanding. Off course, faith is a personal issue but any diverging ways should be kept private and not to create confusion and disruption on the faith of the masses.

Such thinking should not be allowed to propagate to provide the spiritual stability to the masses. When such group dedicate themselves to disrespectfully provoke the establishment, they are pushing the envelope of tolerance.

SIS in Islam started out emanating from a group of women without Islamic learning fighting for Muslim women's rights by questioning the inefficiencies of religious authorities.

Subsequently, they grew to question other aspect of religious authorities. The funding from western foundation made them venture into Liberal and Plural Islam by interpreting Islam from the western secular perspective. They adopted the western human rights as their crying call and associated themselves with anti-Muslims political groups to become political.

SIS is not a new way of looking at Islam or a progressive Islam but a vehicle to question and being disrespectful of traditional Islam. They have become the platform for orientalist theological invasion into the faith of Muslims in this country.

They are confirmed sesat!

I salute you for this article, sir. What modern day muslims lack is passion for learning islam because of their western leaning and education received through the eyes of human rights and gender equalities as advocated by the western world. Wake up religious authorities as you guys are able to clear these problems and polemics.

It would not be fair to just accuse someone of demeaning the prophet. Show the proof if you are truthful.

Anonymous said...
This comment has been removed by a blog administrator.
11:02 PM

Some 2000 years ago, 99% of the population are illiterates, except the poets, the scribes, religious scholars, and the tax-collectors. By and large, they have more important things to do, like putting food on the table and in terms of religions, they let the scholars decide for them, and they follow. Now, most of us are widely read, and educated, and they/we are challenging the religious scholars, and even the threat of Hell no longer frighten them/us, which is a good thing, as many fatwas turned out to be tainted by corruption, fake or misguided.

The number of hadiths collected and attributed to the prophet Muhammed is in the hundreds of thousands, as much as 700,000. The majority of these hadiths are pure lies and fabrications and were rejected by the early Muslim scholars who thought they can figure out which hadith is authentic and which is not. Out of that, only 7,000+ hadiths are accepted as the most reliable ie not fabricated or pure lies.

The Fatwa disputed by Sisters In Islam, right here right now should be tested for it RIGHT HERE AND RIGHT NOW for it's kesahaihan, fabrication, if it is pure lies or that it's not tainted by corruption. Why is it so difficult for PAS or for that matter any Malaysian/Malay Muslim to see that this has been the tradition, the method of challenging evidence to weed out the pure lies, fabricated, tainted issues in Islam, fatwa included?

Anonymous said...
This comment has been removed by a blog administrator.
11:55 PM

They have gone beyond defending woman's rights.

They are emulating Gloria Steinam!!!

Hope they burn they bra and danggle their breaast all over. It will show how ugly they are

Anonymous said...
This comment has been removed by a blog administrator.
5:25 PM

My policies are clear.

Whether you are on my side or other side, no insults especially towards me.

You wanna get your views out so be smart to not whack the blog owner.

give sis a chance to prove themselve dont simply act holier than thou.....islam is diverse....well we dont need no thought ctrl all in all ur juz another brick in d wall......u r actin no more like the takfiri