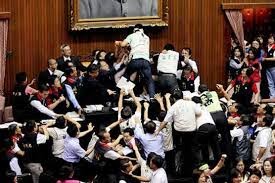 Everyone knows that DAP styles its politics on that of Taiwan. Even its campaign songs are sourced from popular Taiwanese songs.

DAP politicians talk like that in Taiwanese, very rough and aggressive language.

Like their Taiwan counterparts, the DAP politicians like to attack before they are attacked, twist words, distort situations and call people liars when they are the ones talking lies.

The use of foul language is not uncommon, they are very aggressive in accusing their opponents of everything under the sun.

Some call it the politics of ballots and bullets because the politicians like to claim that their life is in danger, their security is threatened and that people are trying to harm them.

They often “receive” bullets through the mail. Sounds all too familiar right?

How many DAP politicians have received bullets through the mail? Sounds more like bullshit than bullets to us.

Like in Taiwan, DAP uses lots of song, slogans and mascots. It is all very gimmicky.

The Taiwanese style is also to stage a giant rally on the eve of polling, to create a sense of excitement and mood that everyone is going with the party.

It is what some have called political theatre, a tactic to entertain, titillate and energise people who would normally not be interested in politics.

Another Taiwan trait is the use of cyber troopers who dominate the Internet.

These cyber troopers have several roles. One is to intimidate journalists by condemning anything they write against DAP leaders especially Lim Guan Eng.

They email nonsensical threats and derogatory remarks to writers.

Another role is to comment on popular new portals like Malaysiakini, running down the government, condemning the other side and praising the DAP and Pakatan.

Their role is to make it appear that there are lots of people out there supporting LGE.

Actually is just a small group, each of them running several email accounts with pseudonyms.

Their cybertroopers are among the fiercest. They act like they are guarding the Emperor and the Middle Kingdom.

After years of DAP leadership in Penang, we have reached the conclusion that Lim Guan Eng is the Malaysian version of Taiwan’s disgraced ex- president Chen Shui Bian, who was president of Taiwan from 2000 to 2008.

But he is now sitting in prison for the rest of his life after being convicted of corruption amounting to millions of dollars.

Yet Chen began his politics as the people’s hero, a street fighter and someone who dared to take on the then all powerful Kuomintang who had ruled Taiwan since its formation.

But he was also very controversial, claiming that he was poisoned during a local level election in the 1980s.

Like LGE, Chen was a superb opposition figure because it is easy to talk and accuse.

Although he talked about a clean government, his own people were quickly corrupted in their doings.

Chen’s favourite line when he failed to get things his way was to blame the previous government and his opponents.

In 2004, on the eve of his re-election, he and his vice-president Annettte Lu were shot at during the final campaign.

Both suffered superficial wounds on the thigh. Soon it became clear that the accident was staged to gain sympathy.

Thanks to the shooting, he scrapped through the campaign with a mere 300,000 votes out of more than 12 million voters.

His second term was even more disastrous than his first. That was when he and his wife decided to make hay while the sun shines.

They siphoned millions of dollars of campaign funds abroad. That and several other corrupt transactions are the reason why the former first couple are now spending life behind bars.

We don’t mind the street theatre of ceramah, the songs and the slogans but please, Mr Drama King, don’t test our patience. We are really getting sick of you.