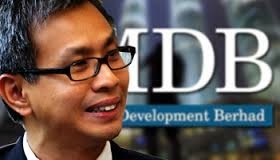 This statement came in yesterday in our Whats App and is already in today's papers:

Issued on 13 February 2015
For immediate publication

"I can now confirm that 1MDB has settled, in full, a RM2 billion loan owed by an operating subsidiary of ours to Malaysian banks. The loan was settled in advance of the due date, per the terms of the loan facility agreement. With the settlement of this loan, I reaffirm 1MDB’s commitment to continue meeting all our debt obligations as they become due”.

In our posting 1MDB: Anonymously Sourced Allegation [read  here], Tony Pua had strongly championed this allegation that 1MDB had defaulted on an RM2 billion loan. In addition, one ex-banker was "screaming loudly" that public money at RHB and Maybank was squandered away.

How come? Is 1MDB lying? Pail Stadlen must be drunk and got our of bed with a strange woman next to him.

But, this is an official statement. They can't do that.

1MDB can get sued and government can get voted out for lying. Tony Pua and that ex banker must explain this to help us get out of this confusion. The truth, verifiable truth must be told. 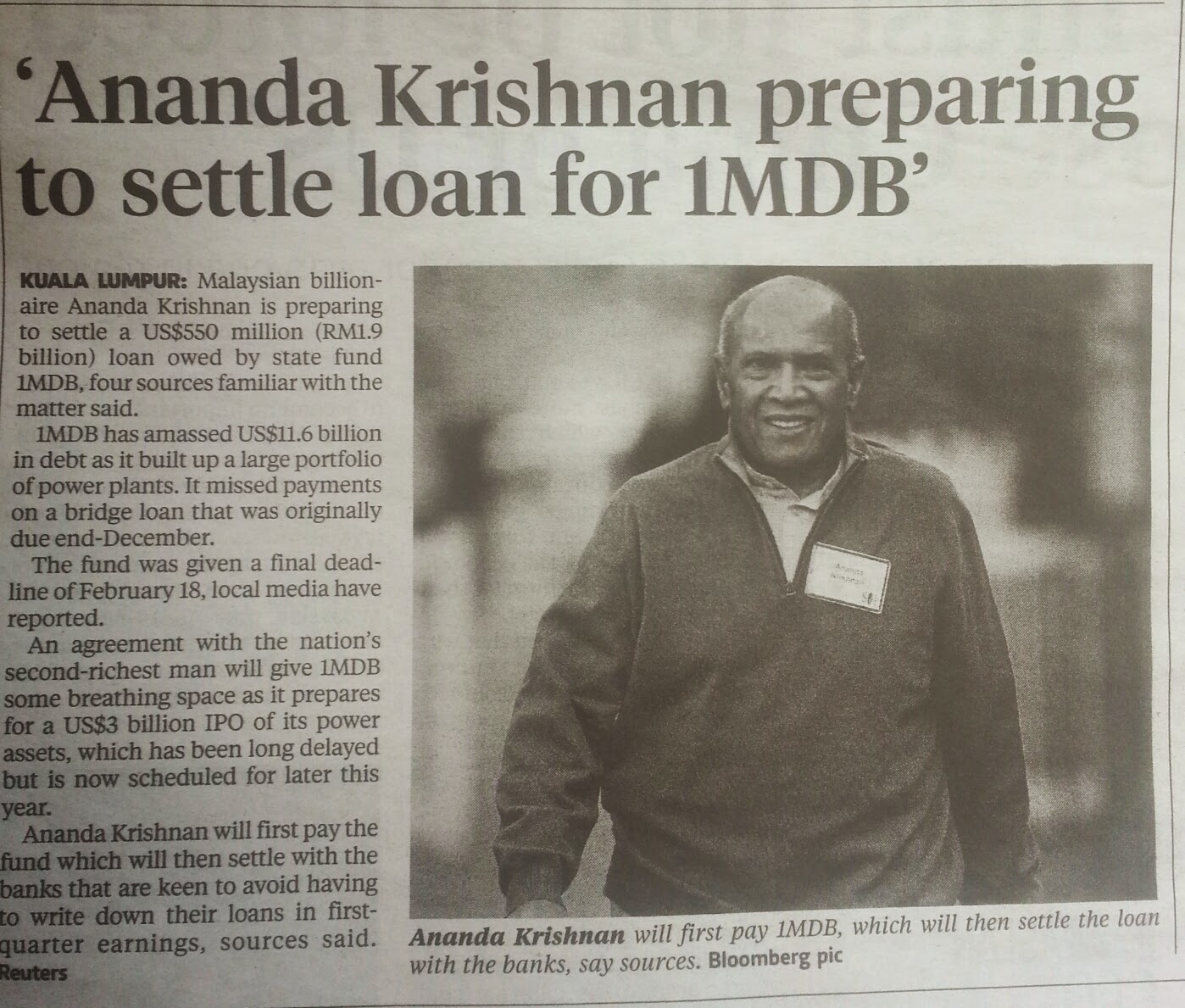 Only yesterday, NST had published this Reuters report of Tan Sri Ananda Krishnan. The same Reuters report can also be found in The Malaysian Insider here.

From a business perspective, it does not matter how one skin the cat as long as it got skinned. Can Ananda confirm this first because it will knly make anonymous sources look bad.

Will that mean 1MDB will be able to get it's energy subsidiary listed on the Bursa?

The last we checked Reuters is still a news agency and has not turned into an agency for blogs and bloggers. While Tony Pua was a blogger.

If Tony Pua missed on this again, he will unfortunately be looking increasingly like a goblog and not the Oxford graduate in PPE he is. His business venture, Cyber Village bankrupted, representing someone else's neighbourhood in parliament and now goblog.

In the tech world, especially in Silicon Valley, a company going bankrupt is not regarded as a stigma. It's just part of the "learning curve".

I dare say that Silicon Valley is a lot more dynamic than the moribund tech sector and start-up scene in Malaysia.

If Tony Pua's company failed, so what? Did he bilk public funds to bankroll that company? Was he censured by the Singapore authorities for this?

As far as 1MDB is concerned, the TODAY paper in Singapore reported that "1MDB repays S$760m loan after Ananda Krishnan bailout". The paper published a a report that was originally published in The Malaysian Insider.

If A K had not stepped up to the plate, how would 1MDB have repaid the RM2 billion that was originally due last November?

Let's not forget also that the total "bridging loan" taken by 1MDB was RM5.5 billion. There's still another RM3.5 billion that is due by August 2024.

Let's also not forget that 1MDB has total debts of RM42 billion.

The banks are basically keeping it afloat while it is trying to flog off it's power assets through an IPO.

Where is the transparency?

I still insist 1mdb defaulted. This must be a lie.

Anonymous said...
This comment has been removed by a blog administrator.
4:22 PM

I remembered Tony Pua's remark, Najib "the mother of all scandals"in relation to 1MDB.

Why don't this high profiled Oxford educated makes a police report and addresses the matter to the anti corruption agency. His political rhetoric could have done with, in the court of law. Don't he understands that slanderous and defamatory action has its consequences.

Perhaps he thinks, "It takes a thief to catch a thief" didn't he?, or is it one of DAP's freedom of expressions?

1MDB is a signature, an objective of Co-operative (Coop) business enterprise. An entity which mapped for a fixture in the system of financial capitalism. It is part of collaborative economy which order for greater benefit and numbers to products and services. However; it is business, business is business, isn't it?, never mind the political Dimwits.

In any business enterprises, there is element of borrowing, payback through profit and loses visibly marked in the operative balance sheets.

In fact, the transparency in good governance is a bunch of crab.

Demand for maximum transparency of good governance do not endure that business under financial capitalism is UGLY. Apparently, politics is dirty and no politician wants to omit it too.

Would that explain about how likelihood practice of good governance, accountability, transparency and follow the rule of law are bunches of illusionary ethics in the capitalist system which already shattered?

1MDB borrowed from Ananda Krishnan to pay back the RM2 billion loan to lenders/banks. Obviously someone has to do "charity" job to settle 1MDB's debt obligation. To pay Ananda Krishnan in the near future, 1MDB will borrow RM2 billion plus interest (of god knows what) from Vincent Tan or Francis Yeoh or Syed Mokhtar. What kind of business model is that?

We the taxpayer will bear the colossal fallout from this fiasco. Billions borrowed with little to show for it except for some creative accounting to 'show' some pathetic profit.
And yet you want to spin this around to show everything is hunky dory.

Tony Paul called it as a default. But 1mdb have repeatedly said that it is not a concern and to be worry about.

Even if 1mdb had a white knight to bridge the short term tight cashflow, it only proves that it has a myriad of options to.play around with its asset and liabilities without having to break it up.

The bulk of income tax paid in this country come from petronas and glc. Thats close to 70%.

Assuming the balace 30% come from rakyat. Still, the millionaires, billionares and tycoon swill constitute the bulk of it.

Generally the rich chinese businessmen andvtraders avoid incoime tax despite the exorbitant profit of buying ikan kembong at rm1 per kilo from fishermen and selling it rm8 per kilo at pasar selayang.

That is the very reason chinese are aggresively opposing gst despite the fact that 90%of countries around the world including motherland singapore. They want to avoid tax and will use it as excuse to squeeze extra profit. They will not deduct the 11% sst and add back only 6% gst but will mark up.almost 20% more.

The majority in government are bumiputera and the tax avoiders are chinese. What do you have to say freeloaders!!!

At the end of it,

Are you insinuating that our Income Tax authorities are not on the ball and aware of the purported tax evasions?

Then why not hantam the MOF? Income tax and corporate tax matters are part of their portfolio.

And you are confusing corporate tax and income tax.

Do you have hard evidence that Malaysian corporations are indulging in tax evasions (illegal) and tax avoidance (legal)?

Go on, brudder. Name names, instead of resorting to innuendos.

Apparently you are not familiar with the intricacies of the corporate world.

A "white knight" is only called upon when a company is in dire straits and has it's back to the wall.

For the assistance rendered, the "white knight" will demand a hefty price.

What did 1MDB concede if, in fact, they got help from a "white knight"?

It doesn't prove that Tony Pua was wrong. It shows that 1MDB, on it's own, couldn't settle the RM2 billion portion of the bridging loan when it became due. In fact, 1MDB missed 2 repayment dates, to the extent that Bank Negara apparently got involved.

What are 1MDB's "myriad of options"? It is desperately trying to flog off it's energy arm through an IPO.

Is this creative financing?

"I dare say that Silicon Valley is a lot more dynamic than the moribund tech sector and start-up scene in Malaysia."

No shit sherlock. Any more pearls of wisdom you wish to impart to the unwashed masses?


welcome to PON YEE LOAN INVESTMENT PLC. we offer loan to those on bad credit ,student looking for financial help and loan purpose such as

With a 1-20 years repayment duration period to any part of the world, here everyone is approved, bad credit OK or even low credit ok.

We give out loans from the range of $1,000 to $90,000,000 USD. Our loans are well insured for maximum security is our priority Are you loosing sleep at nights worrying how to get a Legit Loan Lender? Are you biting your fingernails to the quick? Instead of beating yourself up, call PON YEE LOAN INVESTMENT PLC now, a loan specialists who can help you to stop your Bad Credit History, to discover a win-win solution which is Our Mission.

If you have any of the above problems, we can be of assistance to you but I want you to understand that we give out loans at an interest rate of 3%.

you should Fill out the Application Form which sent to you and return a copy back: