Najib did not OK alone, but no question on the 2 Datoks? 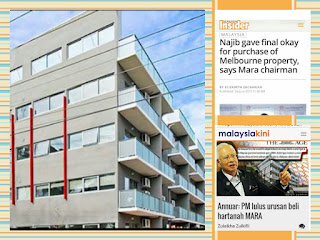 In the posting on expose by Australian newspaper, The Age relating to the MARA Inc. purchase of Melbourne property [read here], the title used was cynical of Australian media.

The Age described the Australian facilitator, Peter Mill as a conman that had served time in prison, but his response in court was described as "surprisingly honest".

The typical slant in Australian media was there but nobody notice. So do be careful with what you read especially in the like of Savior Andre Justo.

Unfortunately, it took only a spin in the reporting by TMI and M'kini to divert attention from the more pertinent questions that should have been asked.

And important to point out that Tan Sri Anuar Musa never said it was Dato Najib who decided but the Economic Council.

See the statement below: 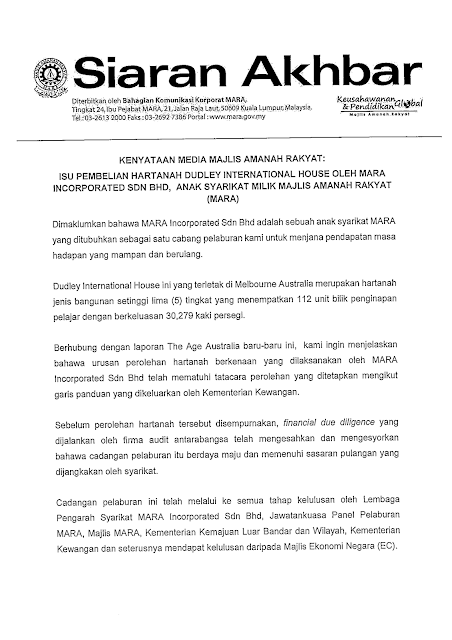 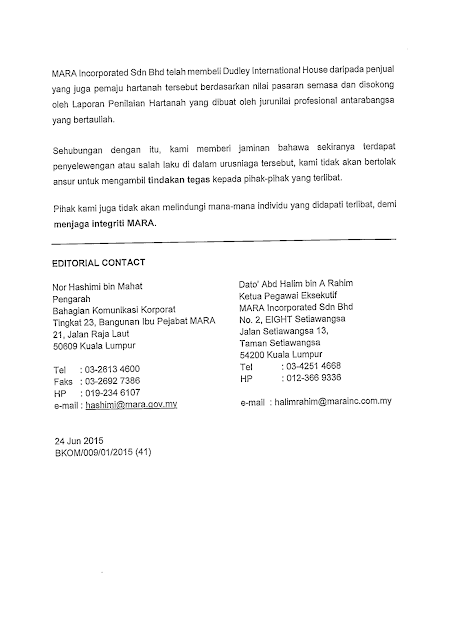 It is a spin but not a lie.

Dato Najib did not decide by himself. As Chairman of the Economic Council, it was a decision made by many which include other politicians and civil servants in the membership.

Anuar Musa statement basically said due process was done and there is willingness by MARA to cooperate with authorities to assist investigation.

Since public attention was swayed to politicised the issue to yet again blame Dato Najib, no one asked the more relevent questions.

The what, why, who, where and how questions.

For instance, who are the two Malaysians - Dato Yusuf Gani and Dato Azizi Ahmad with the two sons Erwan and Erwin that allegedly was behind the scam.

That would have open up to many possibilities.

Someone tipped that Yusuf is a retired high official of Kementerian Kemajuan Luar Bandar dan  Wilayah (KKLW). He is just below the KSU level at the TKSU position.

However, another source told us that the only such retired Yusof is one Yusof Dohab.

The source that tipped on Yusuf said Azizi is also another former KKLW official.

However, ither source gave more specifics like he is former Chairman of Capital Issue Committee of the Securities Commission.

That would only lead to a Dato Azizi Yom Ahmad who was the Chairman of The Store, former D&C Mitsuit Merchant Banker, and was told he is a property developer.

Does he has sons Erwan and Erwin?

Reading in MI or M'kini or some other media, the name mentioned was Ahmad Azizi. Typical of orang putih, The Age could have got the names wrong or jumbled up.

However, they did not misspelled the name of MARA Inc. Chairman, Dato Lan bin Ilani. Unless he is an accomplice, it could be just a political association made to Dato Shafie Apdal.

The big surprise is why did The Age not reveal the name of the developers (or did they?). After spending 8 months investigating and going across three continents, they should know quite a bit.

Do not exclude the possibility that the report was made out of anti-foreigner sentiment. Nevertheless, the allegation is made in court. So it is serious.

Let see what MACC or the Australian authorities can come up with.

It is not easy to establish the existence of any form of collusions - be it involving the two Malaysians, their Melbourne counterpart, valuers and Banks.

Valuers' opinion on what is right value is considered by any court as an expert opinion. It need proofs to dispute their subjective opinions.

As the blog that raised the issue in 2012, it is still long way to pre-judge. However, some section of the public already presumed entrusted money to help Bumiputera was swindled.
at 6/25/2015 11:50:00 AM

Anonymous said...
This comment has been removed by a blog administrator.
2:09 PM

Why the need to use offshore companies, i.e. British Virgin Island entity, to make government purchases? Is this government's protocol?

same azizi as seacera bhd previously? he has a son by the name erwan

The Minister in Charged is now stone silent. After worrying so much on 1MDB he should be more worried about Mara Inc.

Anonymous said...
This comment has been removed by a blog administrator.
8:17 PM

This topic is not about replacing Najib. Find the right place to discuss it. Too overzealous and restless are you? All revolution has its time.

Here you can comment about MARA Inc. Heard Ozzie police raided the developers.

UMNO Malay leaders are corrupted to the core. If there is God, they should all be burned in hell.