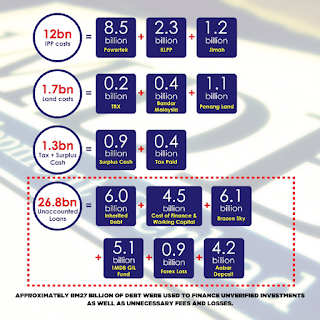 There was an attempt to spin the two charts prepared by 1MDB [see it here] to prove that the RM27 billion "lesap" exist.

If one compare the earlier two charts with the above chart, it is an admittance that the party that accused the disappearance of RM27 billion fail to account for:


1. Inherited debt by the IPP which 1MDB had to assume as part of the cost of acquisition;
2. Expenditure for cost of finance and working capital and realised forex loss (overseas loan)
3. Unaware of the investment fund in Brazen Sky, 1MDB GIL Fund, and Aabar deposit (because did not read the notes in the audited account)

These items have been rearranged from the items in audited accounts to answer the accuser's line of argument. The accuser is not Tun Dr Mahathir but some shrewd Punahsihat that put the RM27 billion "lesap" argument together without concern for his reputation.

A friend disputed our "accounted for" argument using the audited accounts as historical.

The "accounted for" argument believed it is a scandal of Enron preportion for auditor to miss out a humongous sum. It makes the likelihood of such occurance near impossible.

Same as it is impossible for a portal, Sarawak Report to get documents and interview with the Singapore monetary authorities and Banks because the likelihood for such confidentiality is nil [read here]. Even newspaper could not get such opportunity.

Also, the likelihood is near nil for 1MDB to provide fake document on their BSI account. Not all auditors are brilliant but they are not that stupid [read here]. Heaven sake, stop being made a fool by Sarawak Report [read here].

Back to the case of RM27 billion "lesap".

The argument of putting together the cost of acquisition of IPP, TRX land and Bandar 1Malaysia land and deduct the borrowing of RM42 billion from the total to assume amount as "lesap" is also based on historical.

All these are available in the March 2014 audited account and surely it need to be updated to the latest FY ending March 2015. That is what the AG need to ascertain before the formal annual audit by Deloitte do their job.

Thanks to the effort by JMD, he had made a compilation here of 1MDB sceptics.

The sceptics are trying hard to redo the assessment using their own approach. They intentionally ignore how the RM27 billion "lesap" was derived. That is the pace set and thus the error in calculation was rectified by 1MDB. 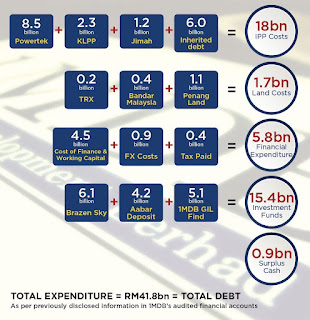 Detractors of 1MDB have also tried to divert their arguments to say this is bad management. Wait a minute. Nobody said having a gearing of RM42 billion/RM1 billion paid-up capital = 43 x is good management, prudent risk taking and halaalan toyyiba.

Below is a new diagram that summarised Dato Husni Hanadzlah:


Move on and accept it is right. That way we can move forward to address other issues or solve the debt problem.The process of the law and governance has to take place too.

Mismanagement is not a crime but embezzement or siphoning of money is. To accuse on such a humongous sum, it must be sensibly and honestly explained. Better still to show solid proof. One is accusing in berbeliyon-beliyon.

1MDB or leadership has to be transparent and need to explain themselves as to why they were willing to take such risk. Was there guarantee or goodwill or opportunity on the table?

Malaysia needs you to be more objective. You may reject Sarawak Report but you should accept JMD, KijangMAS and many other credible bloggers who are experts in their field.

In this trying time, bloggers like yourself, Rocky and many others have to be on the same side - to save Malaysia. No leader is worth the defence if he is destroying the nation just to feed his family.

I guess you overlooked this question (& if you can answer it, please do so):

What is being invested in Brazen Sky, Aabar Investments & 1MDB GIL (what is GIL?)?

are you not scared that the Finance Minister blunder big time in this 1MDB saga. It just show how incompetence he is in administrating the nations finances.

"1MDB or leadership has to be transparent and need to explain themselves as to why they were willing to take such risk. Was there guarantee or goodwill or opportunity on the table?"

Mismanagement may not be a crime but if any decision making party benefitted from the mismanagement then it is definitely a crime!!

Mismanagement is not a crime but embezzlement and siphoning is. That i agree. But on what grounds were the ipps bought for and why were they bought near the end of their shelf life and why wasnt the debt calculated as total cost of purchase? It means that 18billion were spent on something that was about to expire. You cant really blame people like me when we get dazed by the deal? What about those investments? Care to explain what they are worth now? Will the funds invested bear fruit or have we lost the whole tree? Should we wait another year for this to be addressed? Mismanagement. Who should bear resposibility? Husni said everything must go through najib. If the nation loses 20 billion, should he man up? Im just highlighting some questions that people on the ground are asking.

Sorry sir,
I don't understand your diagrams and explanations used to illustrate their diagrams and their explanations. In fact the whole damned 1MDB is as surreal as phantom economics - Iblis must be behind all this gargantuan greed, deceit, and ill-will.

Now we are nearing conclusions...

why try to explain now after TDM start the ball rolling and not before...

every answer given invite to more question...