Will there be those still believing the words of a blackmailer and extortionist? 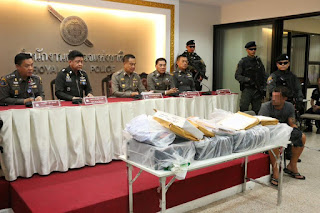 By now, the arrest of a former Petrosaudi official, Savior Andre Justo in Thailand for attempting to blackmail Petrosaudi for 2.5 million Swiss Franc (equivalent to RM10 million) with stolen confidential information is all over the social media and blogs.

Bigdog here has the NST news and analysis. Rocky Bru here highlighted "after the blackmail, various emails and documents appeared on a politically-motivated blog Sarawak Report, sparking a wave of allegations against 1MDB." Also highlighted was Petrosaudi apologise for a regretable crime by one of its ex-employee that was politicised in Malaysia and caused much harm to the people of Malaysia.

At this stage, we wonder will there still be desperate blokes trying hard to make the public believe to information supplied by criminal blackmailer and extortionist? 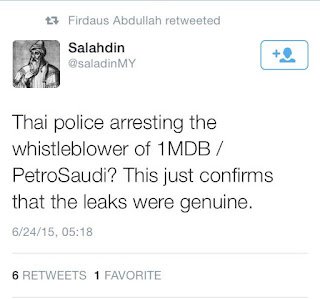 There is one above as retweeted by journalist Firdaus Abdullah or blogger Apanama. If the tweeterer had read the NST report, he would have found the following:


It has now been learnt that some of the emails and documents published on the blog were found to be tampered with, bringing into question the veracity of these allegations.


An expert from PGI said: “Our investigation is still ongoing, but it is clear that we are looking at a case of large-scale data theft, and our analysis substantiates that Justo is the source of the data published on Sarawak Report.

“For example, when we looked into a PowerPoint file that was on one of the Sarawak Report’s blogs, we found evidence in the metadata of that file that it had been handled by a certain “xavierj” in 2013; two years after Justo left PetroSaudi, and four years after the file had originally been created by a law firm that advised PetroSaudi.

“It is also clear that the stolen data sets are incomplete, and underwent an editing process after they were removed from PetroSaudi’s systems, and before they were published on the Internet. There are many inconsistencies between the published data and the data which still exists on files within PetroSaudi relating to that period of time. Simply put, it is incomplete data, creatively selected and edited to fit a desired narrative.

An important was made in the Rakyat Post below:

This could mean the authorities might investigate media outlets that published stories citing the Sarawak Report for being an accomplice to blackmail and fraud or even if these outlets profited from the fall of 1MDB bonds and the Malaysian stock due to negative reports stemming from unverified sources.

Sources close to 1MDB told The Rakyat Post the media outlets which published news based on The Sarawak Report were now responsible for the economic sabotage inflicted on the country.

This means that Sarawak Report had used false data to undermine a state-owned company and put the Malaysian economy in disrepute. It is liken to having a colonialist attacked an institution of the state. But, many Malaysians defended her action.

The first media that comes to mind will be The Edge. In the previous issue, they had issued the following challenge:

With this revelation, will The Edge still standby their allegations and dare to defend their case in court?

With the help of Taek Jho Loh and 1MDB, anonymous bloggers can make quite a few bucks but it has to be those financially affected by the allegations made by The Edge based on the alleged stolen documents. 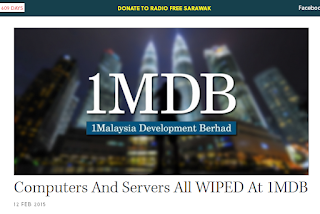 On February 12, 2015, Sarawak Report made a report to claim that they were made known by staff within 1MDB that all computers and records in 1MDB had wiped out. Now it is known that it is a lie and mere cover for their slander using stolen and tampered information [read here].

The talk of information leak was told to us before the report came out but no details could be provided.

Just few weekends ago at a meeting point outside the city, one high official in government shared a rumour that 5 sets of leak documents being passed around. He was confident one set was given to  Sarawak Report, another The Edge, and few individuals.

The believe that they had in hand genuine documents may have misled some to disbelieve clarifying statements made by 1MDB CEO Arul Kanda.

The response to the 13 factual errors pointed out was to ask for evidential documents, which is not the practise in neither public nor private companies but except to authorities or statutory audits or direct stakeholders. Some were trying to dispute by a play of words on the different news reports. And, some tried to divert from the factual correction by raising indirect non- related issues.

Sarawak Report response had been one of regret but stubborness and desperation. They are seeking for the help of the Swiss Embassy in Bern and preempting to accuse the Petrosaudi of revenge and harassment towards the held up swiss national [read here].

There will still be recalcitrant ones but hopefully those that have been making unfounded allegations based on a stolen and tampered information would own up and apologise. The month of ramadhan is the month of forgiving.

Those still in disbelieve could go to this Thai website here for further affirmation.

As for Tun Mahathir, the conclusion in his latest blog posting seemed like his old crytic ways to  admit to something:


The magazine Foreign Affairs seems to admit that Malaysia’s affirmative action has merit. Like the reversal of the opinion on Malaysia’s fixed exchange rate policy, there now seem to be a reversal of condemnation of our affirmative action, at least by the Foreign Affairs magazine. Other foreign media simply copy the biased reports made a long time ago without trying to investigate the realities regarding Malaysia’s management of race relations and development of its economy.

And, we like to believe that he was aware of the Thai arrest before it became news. He may have realised the so-called documents in his possession are questionable.

Another consideration for all to be mindful off.

Be it Sarawak Report or The Edge or even Tun Dr Mahathir, it would not look good to answer in court that the proof-in-hand to their allegations are documents provided by a blackmailer and extortionist.

It has come to our attention that former DAP member, Tan Tuan Tat will be making a police report against The Edge at 2:30 PM today at the IPD Sepang, Salah Tinggi.

One could expect the police report will be to demand The Edge to be responsible for using tampered material to undermine national interest and slander state owned company, 1MDB.

The authority should begin criminal investigation against The Edge for blackmail and fraud. Their e-mails, phone record and information should be seized for purpose of investigation.

The Malaysian public and other authorities should come forward to assist if they were aware of any criminal activities done.

The Malaysian authorities should assist to hand-over individuals in Malaysia to Thai authorities who are the lead investigators as the offense was committed in Thailand.

The Home Ministry should consider suspending the Edge immediately for irresponsible journalism that had damaged the reputation of country.

The authorities must not be soft and should be firm against The Edge to stop the unethical and now criminal act of using unverified source of reporting.

It is time journalist revert back to the journalistic practise to state their source and ensure the information are verified before reporting.
at 6/24/2015 08:04:00 AM

"Rubbishing SR does not vindicate Najib’s cash-turned-asset statement in parliament.

It does not eliminate Arul’s “I have seen the (cash) statement”.

It also does not justify Husni’s lame attempt at “clarification”. We still remember cash to assets to units claim by 1MDB.

In fact this arrest may prove more wrondoings by 1MDB.

Like Julian Assange and Edward Snowden, Xavier Andre Justo is also a whistleblower."

"It is now clear that there was data stolen from PetroSaudi’s files. Perhaps providing basis to some of the allegations in the Sarawak Report.

We note that it is “it is incomplete data, creatively selected and edited to fit a desired narrative.” Can 1MDB now provide us with a “more complete” data – not just narrative – on the dealings with PetroSaudi?"

Which one of sarawak reports allegations is false?

Sir, it still doesnt makes sense on what have 1MDB done in getting into a dubiuos transaction with PetroSaudi..
plus we still want to know why 1MDB put in money in BRAZEN SKY and others plus investing in IPP without calculating the INTEREST RATE need to be paid,,

According to worldwide law "Attempting to blackmail" is a crime and he was caught for blackmailing Petro Saudi. He must have "seen" the opportunity to blackmail otherwise what for ?

even without all those proofs you have come to the conclusion that this IT guys is a black mailer and an extortionist?

who the fuck do you think you are accusing people when he is not yet even been charged in the court of law.

this is clearly a desperate attempt to defend najib, jho low and 1MDB without any concrete evidence.

So justo have been arrested, that makes jho low whittier than white..yeahh rightt!!!..

Now this Rawcliffe bitch says she got 3 million emails from PSI communicated with 1MDB and all other parties. Now she want this Justo to put under Swiss law.

Just wondering to do fraud transaction you need to create 3 million emails communication. And why this bastard have a good time staying in Thailand. If he really got evidence just like Richard Snowden he should seek refuge in Switzerland his home base country.

And 2 side of words he said. He got paid 15 Million from PSI and was ask to leave. And on the other side he blackmail for 10 million Ringgit.

Who on earth will pay an IT executive to give ex gratia for 15 million ringgit.

Put it this way. If you got solid evidence you stay in Switzerland where name like FIFA doing fraud and corruption pun kena.

Why stay in Thailand? Enjoy some pussy and keep on doing scheming for money.

Blackmailing by an ex-employee of Petrosaudi does not mean 1MDB is okay, dude. It simply proves that he know the wrongdoings and is trying to make money out of it.

But the scandals are still there. All the more reason to investigate every angle of 1MDB.

You can shoot the messenger but the public not you will decide the authenticity of the MESSAGE.

After all he was an employee of Petrosaudi.

To remind you Najib LIED in parliament about the cayman CASH.

"So, has Mr Najib accounted for the missing billions?"

mahathir must apologize to DS Najib, if he is really a gentleman!

The report of him receiving 15 million is still unconfirmed. I have not seen the reports other than from The Malaysian Insider which quote Thai media. The question is whether as an act of desperation he tampered the emails and documents. And why would he stay in Thailand, not a known country to protect good whistleblowers. He should go to his native country, Switzerland. Furthermore, we all know what a crook can do to get money. They can fabricate anything. I don't think Petrosaudi is afraid of him anyways. Otherwise they would have paid him and do as he wishes.

"Will there be those still believing the words of a blackmailer and extortionist?"

Of course! If there is truth in what he is saying!