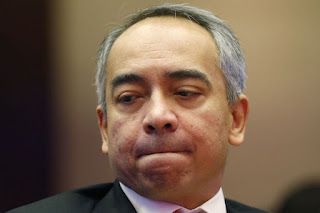 It is almost 10 days of silence without the some great virtues and wisdom expressed by this capitalist investment banker turned socially conscious citizen. Let's not talk of the retrenchment in CIMB becuase he need to project an image of concern for the downtrodden rakyat.

Someone with his moral standing is needed to voice support for the suddenly quiet cause against the big bad 1MDB. The capture of the Swiss Xavier Justo in Thailand should not be a setback to criticise 1MDB.

Nazir must speak because when he speaks, people listen. Even Mat Sabu is looking forward for his entry into politics. After all, he is THE glorious son of the glorious late Tun Abdul Tazak.

As long as it does not sound or replicate anything closely resembling Sarawak Report, he should speak so that the public will think he sounded intelligent and sincere.

Perish such thought that Nazir was criticising 1MDB out of spite for losing out to Arab-Malaysian Investment Bank on the first 30 year bond deal in Malaysia and the lead role that comes with fat fees.
It was not Goldman Sachs as accused but Arab Malaysian.

Why should be concerned since he has got significant holding as a minority shareholder of CIMB. It is only Nazir's birthright to deserve such fat fees but now taken away by "Goldman Sach".

No one would believe that Nazir had such ambition to demand eldest brother appoint him as Minister of Finance. How could Rocky Bru even insinuate such preposterous preposition.

Nazir should continue to speak. Otherwise, no one could remember to ask Deloitte to begin auditing for FY ending March 2015.

It does not matter that the 1MDB office will be pack to the brim with auditors and investigators. Neither does it matter that the responsibility is not MoF but 1MDB management to call for the audit.

Malaysia desperately need such a Nazir to speak loud enough to get 1MDB directors to resign en-bloc. No one seemed to dare do so. Off course, the Deputy Prime Minister was not serious but talking in cryptic political language.

Don't tell me that just because some measly blogger told the public bluntly that Nazir left behind shit in CIMB for Tengku Zafril to clean made him turned mousy. Nazir could sue ananymous blogger just like he and his Anwarista buddy Dato Tong Kooi Ong warned of suing an anonymous blogger for implicating them at the beginning of ringgit slide.

And what is there another shit in the form of his close buddy Sir Tony Fernandez (Tan Sri is not an honour to his British liking) and Air Asia to worry when he has got enough shit for his loan in Malaysia and Indonesia.

Bet the dealmaker, fund manager and broker for GLCs, government established institutional investors, government-connected high networth individual and anything but not related to government must be busy fasting and performing ibadah in silent solitude. It must be tiring to be vocal under the sweltering heat.

Maybe others don't feel the heat. But Nazir does.

The bigger the better because the commision are higher.

Bank laws are broken and closed one eye by the corrupt bnm governor, using RM2 Special Vehicles to by pass laws.

That is the brilliance of Najib brother..stealing from Malays trust funds and companies aided and abetted by the tukang sorak in NST and Utusan.