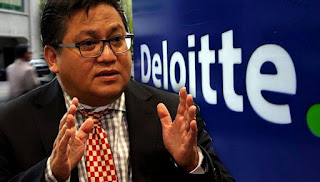 AG has a different role than PAC. It is not an apple to apple comparison to give more confidence in one over the other. AG would still function without PAC but AG's role is integral part in enabling PAC to function. Without AG report ready, PAC has yet to be effective. [Read back our posting on PAC here]

In that posting, there was expressed reservation on PAC to be effective and fair. There was also the question of their capability with only two Accountants in PAC. If Dato Chua Tee Yong no more sit on PAC, there is only Dato Nurjazlan. Even Tony Pua has no credential to talk on accounting matter.

Spoken to soon. They did pry into areas they have no expertise.

The Edge and TMI reported in a one-two tag team to report dissatisfaction on Deloitte. PAC had came to a consensus to question audit's opinion on "on-going concern" and an account's item for asset for sale. [Read The Edge and TMI here and here]

"If the going concern assumption is considered by the management to be invalid, the financial statements of the entity would need to be prepared on break up basis. This means that assets will be recognized at amount which is expected to be realized from its sale (net of selling costs) rather than from its continuing use in the ordinary course of the business."

Be it PAC or the website information, it is merely opinion. Only Deloitte has the authority to give an audit opinion or verify accounts. PAC can only comment but does not have the authority to do anything.

Instead of trying to play Accountant, they can write-in a complain to the Malaysian Institute of Accountants which are vested the authority under the act of Parliament. Tony Pua acknowledged PAC's limitation by making the complain to MIA [read MMO here].

Will he agree when the experts in MIA does not agree with him? Can see him cooking up issue on Tan Sri Samad Alias.

They could also write in to Deloitte International or some international body and turn it into an Enron II scandal. If so able, this blog will do a U turn.

But subject to proof from the dissatisfied accuser. 1MDB have given their explanation as requested thus the ball is in his court to show how RM42 billion disappeared.

The statement today could be an attempt at face saving by PAC. So they say PAC never said satisfied [read MD here].

It was also to cover-up a "retreat" statement yesterday when MOF was asked to request Deloitte to get 1MDB to do their March 2015 audit [read The Star here]. While it was requested by Dato Nurjazlan, it started out by an allegation by Tony Pua that MOF stopped Deloitte from auditing.

How is 1MDB to start audit for the year when they have got AG auditors all over their office? Who will get priority over the documents? No wonder Cyber Village bankrupt, the man thinks auditor can come in as they please. To use Outsyed's seldom used insult, why be "dunggu"?

PAC does not understand that one of AG's important task is to get the current status of 1MDB's financial siatuation and commitment.

As written in previous posting, PAC is filled with politicians and the typical less than smart attempt to politicise is inevitable. In Malaysia's third world politics, facts is of no relevance but more important is rhetorics, slander and perception play is. Even great man succumbed to it.

Those familiar with accounting firm operation knows that there exist a "Chinese Wall" between audit and consulting. Usually it is separated into different companies to avoid conflict of interest. Najib's son is in consulting.

Although it was visibly viralled by some prominent key player in the move within UMNO to oust Najib, again it was the Oxford PPE graduate Tony Pua that started it. Maybe he doesn't know and made the mistake in the past to ask audit instead of consulting to salvage his bleeding company. He thought both come under  one operation.

As pointed out in the previous posting, this is him admitting of being hasty in calling for PAC to convene before AG report is ready.

Further embarassment, Deloitte insisted their March 2014 account is legitimate. In March 2014, 1MDB was an on-going concern and still is during the audit and preparation of the report.

Tony Pua, and Rafizi at behest of YTL and Dato Abdul Kadir Jasin started their series of slanders against 1MDB using materials from Sarawak Report at end of 2014. The suspicion was to derail the plan to list Edra Energy. The winding down plan was only THIS MONTH!

Most embarassing, Deloitte confirmed the existence of fund in the tune of RM13.4 billion in BSI Singapore [read MyKMU here].

This is in contrary to the nonsensical allegations started by Sarawak Report that BSI account is empty and 1MDB had been providing fake documents [read back Azmi Arshad here].

With IPIC willingly to take up the BSI US$920 million fund, only the fanatics and in-denial could not accept that the investment in Petrosaudi did not disappeared.

By December. all should be cleared. That is almost like severing economic ties with the super-rich Qatar and sending the message of disinterest with Middle East FDI.

Another Tabung Haji phenomenon. What to do when the masses are, to use Outsyed again, "dunggu", irrational, manipulatable and hysterical? Blind loyalist only believe the assessment of others but do none of their own. They could not even ask for proof.

Arul Kanda is now on more aggressive and responsive mode [read Bernama here]. It is high time to play the game as politician do because the issue is no more corporate communication stuff but politics.

Arul responded to Tun Dr Mahathir's blog posting against him on the insistence of the missing RM42 billion [read here]. JMD responded by claiming Arul trying to be a politician. For clarifying himself? Strange .... [read him here.] He was previously slammed by Lim Sian See here.

This is the sort of quick response that was supposed to be done long time ago. Instead, issues was left  hanging without any decent response and confidence allowed to deteriorate. It looks better to allow 1MDB to handle the corporate communication themselves.

Rocky Bru [read here] is right to ask PM to stop talking on 1MDB and for better or worse, allow Dato Husni Hanazlah to play his spokesman role. PM got too much on his plate and his team has not been proven successful in perception game.

Reezal better get his lawyers working. Public tend to believe Sarawak Report, The Edge, TMI and the lots despite knowing they are lying simply because no lawsuit.

In fact, The Edge's latest issue that was viralled by a group within UMNO wanting to oust Najib has ground for a lawsuit. They linked Petrosaudi's past purchase of a block of shares in UBG to Jho Loh. Facebooker Lim Sian See highlighted major discrepencies in their fact. [See here and here].

Jho Loh should sue this liars, otherwise he will remain guilty until proven innocent.

Lastly Arul slammed PAC member Tony Pua for the wild allegation that Ministry of Finance stopped Deloitte for commencing audit. Are we wrong to not trust PAC when there is an irresponsible member like him?

bro, it really sounds like you are saying intelligent things, but your English is so godawful, it's really hard to understand.

But Arul Kanda did lie. And najib lied in the parliment. How to believe them anymore.

Nur Jazlan says since Arul Kanda is a Muslim, he will be allowed to fast and therefore PAC will not call him in during the puasa month.

it's jazlan way to save najib's neck.

if we use jazlan's excuse, then the govt should tell all muslims civil servants to take off for the whole of ramadan.

1. JMD said that $1 billion from IPIC was the same $1 billion paid in 2014. He concludes
"It is uncertain what these assets are although the only known valuable assets 1MDB has are the lands in TRX and Bandar Malaysia which were originally reserved for bumiputra development.

So in the end, the bankers get their money back, with some interests; Aabar gets USD975 million cash last September and from now on, some of 1MDB’s assets, including those redundant units. And 1MDB gets to lose some of our prized assets."
Source:
://jebatmustdie.wordpress.com/2015/06/09/ipic-the-rm3-6-billion-payment-for-1mdb-dummies-2/

JMD concludes that cash injection does not represent a real economic gain by 1mdb as net-net, 1mdb loses the units, the $1bilion being the same amount that was paid in 2014 and returned in 2015

2. LSS takes one sentence and tries to spin that JMD does not understand financial statements. He shows the balance sheet excerpt on the AFS portfolio I.e, the "units" and the 1mdb GIL fund

3. JMD is broadly correct in his assertion. 1mdb is not better off after 1year because the cash paid and was returned, this time less the units. But, 1mdb has not clarified whether the units were sold or were used as collateral as in secured lending. This is also a key point.

4. LSS fails to mention that subsequent to FYE2014 closing, a bulk of the "units" were redeemed to pay for interest expense. So now in 2015 there are 2 scenarios depending on the nature of the ipic transaction

Scenario A: No increase in cash, no increase in debt arising from the IPIC option repayment but loss of AFS assets representing RM 7 billion as all the "units" have been sold.

Scenario B: No increase in cash, increase in debt by $1 billion US. 1mdb retains 1.103 billion of the "units" of still indeterminate value

Tun M is lying and he has no new material to back his accusations. He has no proof and no more sensible story. That is the reason he is repeating himself like a broken record with the hope that people forget his lies. He has lied on many points. The truth shall be told eventually and it shall set us free from the shackles of his tyranny.

The reason Tun M prefer PAC over AG is that the loud voice of the opposition will swing the argument is his favour. He is not interested in the truth but only politics for politics sake and the benefit from the power that came with it.