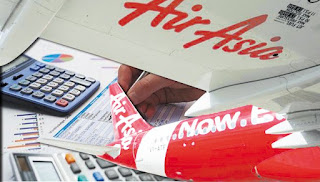 Since the GMT Research report on June 12th got the attention of investors, Air Asia prices plunged by more than 30% to hit a new low at RM1.43. [Read our posting here].

The report raised concern on AA's ballooning receivables and over charging of associates. It raised possibilities of AA needing recapitalisation.

AA issued a statement today to rebuke GMT's report. Statement available in The Star here. Taking an extract from The Economic Times of India:


The audit committee said it is "somewhat distressed and peeved to have been accused of corporate governance abuses and condoning accounting gimmicks".

AirAsia had said last week that its next quarterly financial statements will reflect the results of its associates, and that its accounts were transparent and prepared in line with global and local accounting standards. 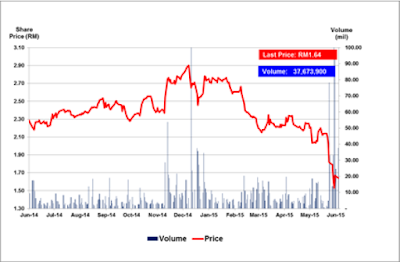 On 10 Jun 2015, a GMT research report raised the concerns about AirAsia’s ballooning outstanding receivables owed by its associates and a possibility of recapitalisation exercise. Subsequently, its share price plunged 32% and hit a 5-year low at RM1.43 within the next 5 days. The 39-page report also highlighted that AirAsia gained profits from “overcharging” its associates and implied this situation similar to the financial shenanigans which involved Shin Corp and AIS.

Repayment of receivables through cash-funding

As of 31 March 2015, the receivables owned by Indonesia AirAsia (IAA) and AirAsia Philippine (AAP) had swelled to about RM1.5b and RM0.7b respectively. During 1Q15 result briefing, the management of AirAsia had tabled the capital injection plans at IAA and AAP to partially recover the amount with at least RM1.0b (out of RM2.8b) owed by both associates. Following GMT accusation, AirAsia unveiled more details that the group is in final discussions with their local partners to inject fresh capital c.USD100m into both associates as well as issuance of another USD100m convertible bonds (CB) by IAA and PAA respectively (USD400m in total). The CB sale is the part of pre-sale of IPO plan and will carry a coupon rate of 3-4%p.a. with 2-year maturity. We believe that the funding plan should be able to instil the investor confidence to avoid the destructible write-down of these associates’ receivables.

The GMT report accused that AirAsia has failed to disclose the related party transactions which we do not fully agree. The carrier has consistently reported its leasing income and other variable fees generated from its associates in its quarterly reports. As of 1Q15, the total aircraft leasing incomes was RM224m (17% of total revenue) with 47 leasing aircraft. Based on the simple calculation, it works out to an average leasing rate of USD430k monthly. The leasing rate is slightly higher than average market rate of USD350k monthly but it is justifiable given its higher utilisation rate and shorter economic life span. AirAsia would continue to lease its aircraft to Thai AirAsia (TAA) rather than transfer these aircraft assets to the latter if it has intention to further benefit from these associates.

Various options in tapering off gearing.

The recent intense competitions and irrational capacity expansions had weakened the AirAsia’s financial strength. Its FY14 net gearing ratio spiked up to 250% from 105% in the past two years. We believe that there are ample ways for AirAsia to degear. The setting up of a leasing company by the holding company, Asia Aviation Capital (AAC) will greatly reduce the gearing ratio through novating a total of 61 narrow-body aircraft to this entity. From the tax perspective, the structure is also more tax efficient since the subsidiary is based in Labuan tax free haven. Secondly, the group can monetise its non-core assets including AA Expedia, Tune Money, Tune Insurance, AACOE and BIG. Moreover, AirAsia planned to sell and leaseback 16 older aircraft (out of >120 directly owned aircraft) to raise a total proceeds of USD384m (eight of aircraft deal were already secured).

The rest is blah blah blah about operating environment would improve so buy on dip.

Tony's buddy, Dato Tong Kooi Ong gave a glowing coverage of the statement in The Edge Market today. So defensive and hardly critical. Read below: 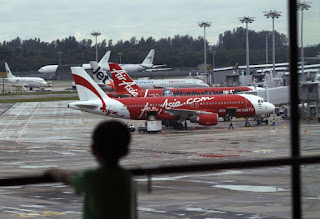 AirAsia Bhd clarified today that it is bound by legal constraints that have limited its ability to consolidate the accounts of its consolidate companies in Indonesia, Philippines, Thailand and India.

“The audit committee, the board and management are therefore somewhat distressed and peeved to have been accused of corporate governance abuses and condoning accounting gimmicks.

“The audit committee wishes that statements are verified with those responsible before they are put out in the market place to ensure that they do not unfairly tarnish the image of AirAsia, the board of directors, management and auditors,” he added.

According to Kumar, the report had stated: “Of course AirAsia management will try to avoid consolidating associates if it leads to materially lower reported profits and without duress auditors are unlikely to push for it”.

The GMT Report had also referred to “accounting gimmicks” and corporate governance abuses.

Kumar said that after a series of meeting with AirAsia’s auditors PricewaterhouseCoopers (PwC) over the past year on the need to consolidate its associate companies as it would present a “true and fair” view of AirAsia’s relationships with its associate companies, the company was informed that to do so would be a breach of the MFRS10 (Consolidated Financial Statements Accounting Standard).

Subsequently, the “true and fair” override would also not be allowed, he added.

“PwC has however taken the strict interpretation of power in MFRS10 (Consolidated Financial Statements Accounting Standard) and advised that AirAsia cannot consolidate its associates companies because it does not have legal power,” he said.

“Their view is power in substance is insufficient to meet the criteria for consolidation, as such substantive power can be withdrawn at any time by the associate companies.

“Therefore, contrary to the GMT report that AirAsia did not want to consolidate its associate companies, we were compelled not to consolidate as a result of the opinion of our Auditors. Consolidation would have attracted an audit qualification.”

He also said PwC had informed the company that aviation regulations in Indonesia, Philippine, Thailand and India stipulate that AirAsia cannot have legal control or legal power over its associate companies.

He said any change in AirAsia’s present relationship with associate companies, be it in equity shareholdings or shareholders agreement, that would ascribe legal control to AirAsia will result in the loss of its associates’ airline operating licences.

He said due to AirAsia being unable to consolidate its sister operations, the company fully disclosed the financials and operating statistics of its associates, as provided in the first quarter 2015 announcement to Bursa Malaysia on May 28 this year, for stakeholders to have information on the performance and financial position of the associate companies.

Last week, news of the GMT Research report had caused AirAsia shares to plummet to a record five-year low on Wednesday.

On June 12, GMT Research had published a report on its website questioning its accounting, profit generation, cash flow issues, leverage and group structure.

The Edge Financial Daily had reported last Tuesday that an analyst, who had viewed the report, said the main concern raised by GMT Research was AirAsia’s applied method to account for losses from its associates, saying the concern was that AirAsia had understated losses by its associates.

AirAsia (fundamental: 0.2; valuation: 1.4) shares rebounded on Thursday by as much as 9.15% after AirAsia released a four-page explanation on its desire to consolidate the accounts of its associates, which is impeded by regulatory barriers.

Cannot consolidate because it has no legal power? MFRS 10 can be found here.

This will not be the last of this episode. As per the typical response by the Malaysian public to questionable statement and opinions these days, will AA sue GMT Research to prove their innocence?

Just wondering what would CIMB Securities recommendation on Air Asia and the impact of the latest development on CIMB's loan portfolio in the future?
at 6/22/2015 10:17:00 PM

Agree fully with GMT allegations. Air Asia is a con job. It is only a matter of time before the cat's out of the bag.

Not surprising about the Edge. We all know the common thread that binds these companies together....their hatred for Malays, Muslims and the Malaysian Constitutions

Won't be long before Air Asia becomes a penny-stock.

Brick ... You could be on the ball on CIMB. Lets hear Nazir squirm. He shouldn't be on Khazanah board.

See the Calls and Price Targets (TP) set by some of these investment banks:
http://klse.i3investor.com/servlets/stk/pt/5099.jsp

"Buy" may be fine since the recent selling looks overdone. So, some sort of technical rebound is extremely likely. But a TP of 3.11 by HLG, and the 3.00-plus by Public Bank and MacQuarie Group...?! The latter likely has vested interest in wanting to push its way-out-of-the-money call warrants to suckers.

If they are that confident of Air Asia's prospects, why is it that there's not put warrant issued for this counter? That would be easy money for these investment banks. And a service for traders to short sell AirAsia the easiest way. Tarak berani ke?... which goes to show there's deceit with their Buy calls and the Target Prices.

See how fast it took them to issue counter statements? One company can learn a thing or two about management from them. I am no fan of airasia but at least tony gets his hands dirty. Unlike someone from the other company who head the nation. One time, it was all him, than it was cabinet. Tony is acting like a businessman. And you should drop the "should sue line". By suing doesnt make you are right and by not suing doesnt make you're wrong.

AA ...the writing is on the wall..only the blind don't recognize it..we knew then and we know now too..the flawed, exaggerated business model. Typical of unlearned "I am the smartest" Malaysians fall into this bull**** one is none other than a chairman of a bank. Need I say more ! And we have pigs like the Edge's owner (we all know how he became prominent) propping BS in defence of TF. AA will be worthless pennies. Give it a few more years. AA will drag its banker along too.

But the balance sheet play that's where he got screwed. Next time play on patient like his old boss Richard Branson. Tony is trying to run very fast which is typical Malaysia style doing business to get rich quick or to be billionaire on the fast track

By the way you got that bankers who always want to tag with only successful branded name, well he will soon have to bite the bullets and eat shit from AA vomits. Very Greedy Very Naughty.