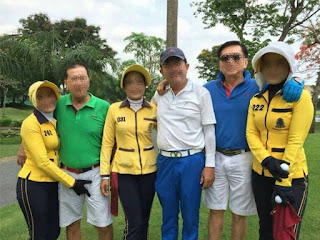 Have you ever heard a Malay cynical meaning for the acronym G.O.L.F.?

It means Golongan Orang Lemah Fikiran or group of people with weakness in thinking. It was making fun on the tendency of golfers to be lost in their conversation on golf with other golfers in the presence of the incomprehensible non-golfers.

However, this joke on the supposedly social elite is no more funny. The weakness being made fun off is no more of their social misfit but it has turned serious to become a moral weakness.

The game of golf is a social sports. It is useful for widening social network or diplomacy as Dato Najib did in a round of golf with US President Obama over Christmas vacation couple of years ago.

Golf, especially those sponsored overseas golf trip, have become the avenue to lobby for contracts and conduit for corruption! 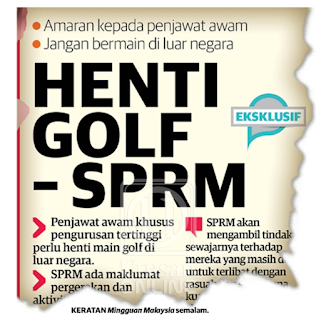 In an interview with Mingguan Malaysia [read here], MACC Commissioner, Dato Dzulkifli Ahmad touched on this issue. There are many golf courses in the country thus why the need to make trips abroad?

It is an open secret that government officers or politicians get entertained for couple rounds of golf and woman abroad by businessmen.

Golf seemed to be a harmless sport but the seduction of golf by its own (without the woman) is known among contractors.

One story told by a former office-bearer of Persatuan Kontraktor Bumiputera of how a pious former boss of Pusat Khidmat Kontraktor (PKK) started out clean but his passion for the sports was the opening "corrupt" contractors were looking for.

In the Utusan today, MACC Deputy Commissioner (Operation), Datuk Azam Baki begn to speak of this problem which means it has reached epidemic preportion.

Presiden, the Association of Former MACC Officers, Datuk Razak Idris said 99% of government officers making overseas golf trips did not seek permission from their superior for such trips. It is part of the standing order for government officers to do so for any overseas trips.

With the coverage given to the golf issue and encouraging support expressed by Majlis Perundingan Melayu and CUEPECS, could it be a prelude to another major corruption investigation on overseas golf by civil servants?

Is the lady on the left, grabbing the man's (ahem) "golf balls"?