Look friend ...Former allies can think for themselves 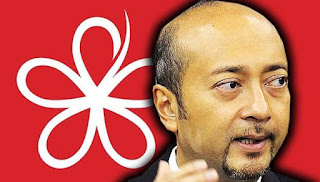 He claimed these former allies are people his father helped. Basically, he expect them to be indebted and remain blindly loyal to his father as any feudel lord expect. Such expectation is a major turn-off.

His father do not give chicken feed or dedak, because like BR1M, it is corruption. He gives chicken and allow the chicken coop stolen.

Whoever the chicken devouring allies be, they should not criticise his father for doing 17 U-turns, sleeping with the DAP, and betraying UMNO to be in-cohoot with people his father used to deem as "enemy of the state".

It is understandable that fillial son like Mukhriz has to defend the father. The family honour is at stake and his political future is on the line.

More so, the "exclusive" nature of his fiber optic cable contract tantamount to monopoly.

The PPBM deputy president says the party's ratings go up every time his father is attacked.

PETALING JAYA: Mukhriz Mahathir is infuriated by those who condemn his father, Dr Mahathir Mohamad, over various issues, especially individuals the former prime minister had helped in the past.

The Parti Pribumi Bersatu Malaysia (PPBM) deputy president said in a report by Sinar Harian, that many of Mahathir’s critics were friends of his during his 22-year reign as the country’s number one.

However, Mukhriz, in the interview, did not name any of these individuals.

Mukhriz, who was removed as the Kedah menteri besar last year, said while the family had grown accustomed to criticisms by Mahathir’s previous allies, such comments were unwarranted.

“It’s frustrating as we know these people, who were once our friends. I can even tell you how Mahathir helped some of these individuals.

“If it weren’t for him, these people would not be where they are today,” he told the Malay daily.

Mukhriz, however, said research had shown that PPBM’s ratings would surge every time people “attacked” his father.

This is why the party, he explained, did not respond to such criticisms.

“Let them say what they want to say. They don’t know the Malay sentiment. I am also surprised that Umno does not understand the Malay psyche.”

Mukhriz said the public would sympathise with those who were humiliated.

He went on to say that the people were still behind Mahathir, based on how they warmed up to his father when he went out to the malls, which was why he was confident of their support.

“This is more important,” Sinar Harian quoted Mukhriz as saying.

If Mukhriz thinks criticising his father will make PPBM popular, why must he be worried?

Mukhriz should remain silent and let the former allies continue to enable PPBM to gain better rating and more votes.

Not all former allies are indebted to his father.

Some did it for the bigger cause without any renumeration and monthly RM10k salary from a gambling company.

Some former allies are independent minded and can think for themselves.

To question why they blindly support without asking questions in the past but now asking lots of questions, it is an insult to any thinking person.

In the past, they were lied to but this time, they do not want to be lied to again. They can see his father has insincere intention.

His father knew Dato Seri Anwar Ibrahim was "immoral" from way back in 1994. He only brought him down on sodomy and corruption in 2000s for attempting to overthrow him.

This time his father could not explain himself convincingly. He is not willing to share his proofs. And he expect certain former allies to just follow?

When they refuse, he name called them as taken dedak.

Twice he pushed Tan Sri Muhyiddin's name as possible Prime Minister to replace Dato Najib but it was merely to end his chance.

From the beginning, he wanted to only cross the bridge when he reach it. It allows him room to manouvre.

Why no firm denial that his father and Kit Siang allegedly agreed to put Mukhriz up as the eventual Prime Minister?

His father knows Mukhriz is a weak leader and yet has intention to prop him up.

Allies are expected to support wholeheartedly. This sort of blind loyalty cannot be entertained.

Others can compromise to now claim Mahathir and Dato Seri Wan Azizah are political icon.

Some former allies are not hypocrites. There is a level to tolerance. Keyword is tolerance and not blindly accepting. 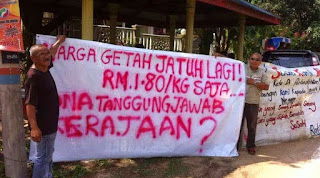 Mukhriz can today stage a protest by rubber tappers against government for the low rubber prices to smallholders. [read Utara News here].

It has to be him because this statement appeared in February 2016 on his blog here.

Mukhriz had big ideas like building a Rubber City. Yet he is uninterested to solve the low rubber prices for smallholders.

It is not like there is no self sustainable and financially viable proposal that came his way. It went direct to him and through a certain MP.

Mukhriz is not bothered.  He does not care. He only want to fly to Kuala Lumpur by Firefly at the end of the workday.

And his people are too bloody arrogant to listen.

Upon knowing the problem of low rubber prices for smallholder in 2014, he was merely giving bureaucratic statement.

He does not wish to make any initiative but was only dependent on budget from federal government. Too personally rich and comfortable to take extra effort for the rakyat.

When he could not get that extra budget, he could only think of helping rubber tappers with food provision. That does not need a graduate from Boston University with transfer credit from Sophia University.

He spoke of long term solution but what has  he done? Has he any idea yet where to put the Rubber City?!

Today he wants to be champion for rubber tappers. But in 2014, his dedak eater was esctatic when there were fewer turn up at the rubber tapper protest.

The crowd was diverted to a majlis selawat Mukhriz had organised.

Obviously there were no other parties in PH who can beat Dap's dominance. As such the only party that is so qualified to talk about the Putrajaya Officio 1 (PO1) in waiting is either LKS or LGE. The rests are merely day dreaming, Bro.

Mukhriz, the people owe you, your family and cronies absolutely NOTHING!

Don't think that the rakyat owes you.

Your family needs to know that in reality, it is YOU WHO OWES THE RAKYAT.

I was a supporter of your family...loyal from head to toe. Was I a 'pemakan dedak?'
Now all I see is GREED AND SELF SERVING ATTITUDE amongst ALL your family members. I feel saddened that Malaysia has a destructive and greedy family like yours in such position of wealth and power.

Maybe back in Kerala, you'd be 'upper caste'....but here, you are just crass.

With regard to former allies attacking Tun M, Mukhriz should also remind his father that attacking DS Najib, the son of the late Tun Razak, is an equally ungrateful act.

It was Tun Razak who had agreed to Tun M's plea into rejoining UMNO after the latter was sacked from the party by Tunku Abd. Rahman. Should he had rejected the Tun M's readmission, nobody would ever know Tun M's boboi by the name of Mukhriz.

This posting will make boboi run to mama