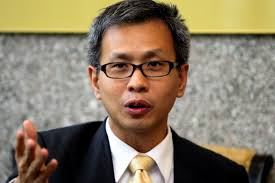 Googling misfeasance will immediately come up with the explanation that it is an early 17th century old French word for mesfaisancea.

The simple meaning is transgression, especially the wrongful exercise of lawful authority.


Misfeasance in public office is a cause of action in the civil courts of England and Wales and certain Commonwealth countries. It is an action against the holder of a public office, alleging in essence that the office-holder has misused or abused their power.

His intention seemed out of concern but it is intended to be a politically deceptive move to fool the Malaysian public.

How irresponsible can an opposition leader be to misled his followers and in the process converting them into foolish zoombies.

1MDB attack is losing steam and opposition have diverted to economic fear factor strategy. This look to be a desperate attempt to recycle lately.

One prominent lawyers WA us the following:


The suit is based on the assumption Najib Razak is a public officer.

One element of the tort of misfeasance of public office is it must be shown that Najib Razak is a public officer. He is not.

The Interpretation Act 1948 & 1967 defines public office as “an office in any of the public services”.

Section 132(3)(c) of the Federal Constitution states that the public services does not include the office of any member of the administration in the Federation or a State.

A member of the administration under Article 160 of the Federal Constitution means “a person holding office as Minister”.

Najib Razak is a minister but ministers are not considered a public officer. Therefore, the suit will fail.

The defense Menteri Besar is not a public officer was attempted by former Selangor Menteri Besar, Dato Dr Khir Toyo but rejected at Court of Appeal.

Are the circumstances the same or different? The lawyers will be slugging it out.

Not only that the opposition are working hard to recycle and revive the 1MDB issue. They are reenacting the same old Tamil drama. 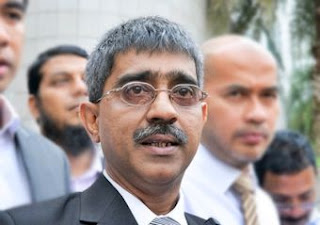 If he does not intend to, then he should reopen investigation on the RM2.6 billion that went into Dato Najib's personal bank account [Read Malaysia Dateline.com here].

It was mentioned in court that Taek Jho Loh is Tan Kim Loong who operated Tanore Finance account at Falcon. The case fact is the Manager is in collusion to allow a fictitous name operate an account.

The same legal source said to bring him over for a slap in the face. Maybe it is not a good idea.

With these people from the little continent, a light touch on the cheeks will be exaggerated by the studio audio as a major slap and the reaction dramatic!

In the meanwhile, Hanif's client and the real drama king, Matthias Chang have been alerting his send list that Obama, Clinton and CIA will attempt an assassination attempt on Donald Trump before his inuaguration to allow Obama a third term. 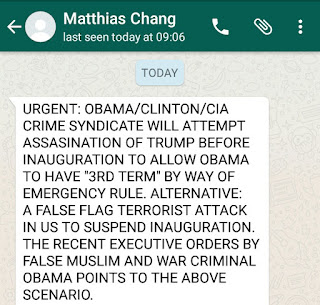 No smiling please, he is as serious as Tony Pua and Hanif Khatri.

Trump's inauguration is just two days away. Let us see if the conspiracy theories come to pass. As a lawyer, Matthias Chang must be more careful with what he posts online as posting popular conspiracy theories does no good for a lawyer's reputation. Anyway, if Trump is assassinated or passes away anytime after his inauguration, Pence, not Obama will take his place.

I have read, heard and seen too much online about the U.S. economy crashing in 2012, 2013, 2014, 2015, 2016, the world ending on 22 September 2016 and now 23 September 2017 and so forth The period around 22 September is the Autumn Equinox when the sun crossed the equator into the southern hemisphere and it occultists have given it a significance but otherwise it is only followed by climatic changes due to changes in air and sea currents and has significance to farmers who plant, grow and reap crops.

I used to get caught up in them but now I tend to ignore them and spend less time before my computer and get about more doing more practical things.