Will Koon Yeow get upset now that is known PTMP PDP consortium partner is a bankrupt? 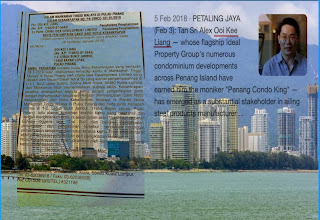 In the posting on Chow Koon Yeow losing his temper on BfM, he mentioned the tender process on the Penang Transport Master Plan (PTMP) including the Penang South Reclamation project is still on-going.

Chow reiterated the total cost forecasted is RM46 billion and was upset with an interviewer because the radio station earlier quoted from The Star's estimated cost for the project of RM70 billion.

Will Chow be upset now that the social media is viraling a published banruptcy notice of Tan Sri Ooi Kee Liang with the message that allagedly claiming:


Wah... Penang govt awarded the RM46 billion PTMP project to a company where the owner is bankrupt?

The viraled notice dated March 29th is as below: 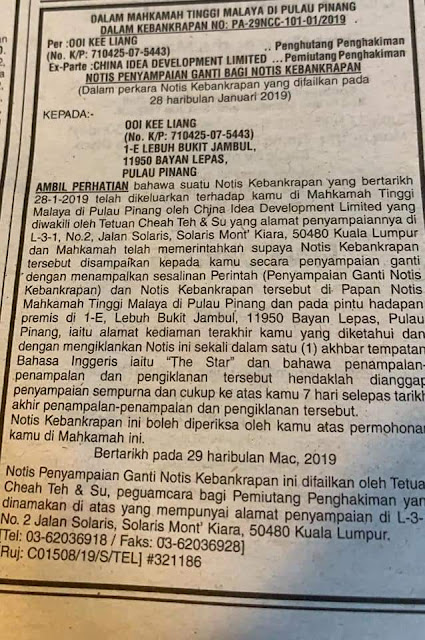 An accompanying image reads below: Alex Ooi have been the man accredited with the success of United Bintang International Berhad (UBIB). Read this three series on investor.com HERE, HERE and HERE.

Being dubbed Penang's condo king, one can safely assume he is a supporter of the Developer Association Penang (or commonly known as the political party DAP) and was reported in June 2018  to have contributed substantially to the Tabung Harapan.

That contribution may have been only pocket money from dabbling in Tat Giap. He was reported to enlarge capital in the company in February 2018 followed by a bit of hype and management change then out he goes.

Tatt Giap was passed to a Johor based engineering company, Dynaciate Engineering thus suspecting this could be part of Lim Guan Eng corporate scheme as it usually involves Bangsa Johor corporate friends.

Alex Ooi became reknown as condo king for the high rise development done under his flagship company Ideal Property Group. As of December last year, the company was being injected into UCIB but now renamed as Ideal United Bintang International Berhad (IUBIB).

Ooi also has a 20% stake in SRS Consortium Sdn Bhd, which is the PDP for the PTMP. The other being Gamuda Bhd (60%) and Loh Phoy Yen Holdings Sdn Bhd (20%). On top of that, IUBIB is invited to tender for the RM1.2 billion expansion of the Penang International Airport.

An interesting story heard of this project. At the time Azmin announced plan for Kulim Internatinal Airport, Lim Guan Eng slipped together the PIA request for Mahathir's approval. Without any choice, he has to approve for both Kulim and PIA expansion. An aviation insider commented it is two white elephants in the making.

Alex bankruptcy notice is typical roll and tumble of business world. Players like Alex may have planned for this eventuality and last week saw 13.48% UBIB shares traded off-market. Their shares in SRS can be sorted out with friendly parties possible Tatt Giap and Loh Phoy Yen.

Life can then goes on as usual. However, it does ruin the reputation of Penang government for planning to have a bankrupt being eventually awarded the PTMP. Off course, the tender process is on-going.

However, guess most of us are not born yesterday. There is not much money in 20% of PDP consortium. and even federal government wants to chug away with the role of PDP. The 20% could be suspected to be taken for a "someone".

The real McCoy is in the engineering and construction contract work, and property development on the reclaimed islands.

Talk in Putrajaya, these days Ministers openly tell government servants verbally they want this that projects. All done without any written notes.

Contrary to election manifesto for open tender, negotiated projects is getting more prevalent since the word Kerajaan Sepenggal getting more popular.

Hope Chow not get upset. BfM has basis to quote RM70 billion. They are not just some reporters merely regurgitating quotable sources. More so, the pioneers have investment banking background.

A source in DAP claimed the cost is RM46 billion and still counting. A source for kickback and corruption. Only the hair on Guan Eng's head is straight but not even his pubic hair

In the event something go wrong, and PH lose in the next GE, these are areas the now friendly MACC, Police and AG will turn around to investigate. As a word of caution, the CM, MOF etc. will be the natural target.

It is good for the country. Few changeover of governments and the subsequent witchhunting could be the much needed remedy to make politicians, businessmen, civil servants and GLC heads be more careful and cautious.

The long handed ones will remain, but it will not be as blatantly done and at least, the economy can benefit from competition and merit.

Possibly, frequent change in government could be the solution for an efficient and clean system of government to emerge.

Not sure economy could strive and foreign investors be interested with an unstable Malaysia.
at 4/27/2019 02:02:00 PM