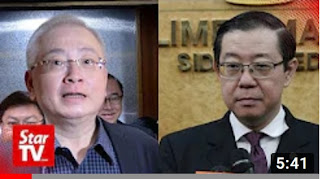 Update on the two previous postings - HERE and HERE on the proposed sales of the Malaysia Building in Hong Kong.

Lim Guan Eng responded to Wee Ka Siong allegation he had mistaken Hong Kong dollar for Malaysian Ringgit to show a letters that could prove there was such an offer. When provoked, the egoistc and hot tempered Guan Eng reacted expectedly.

The Star video below of the press statements of Guan Eng and Ka Siong's immediate reply.

The letter stated RM1.68 billion and was dated January 2019. Strange that Guan Eng did not go to town to gloat as RM1.7 billion. 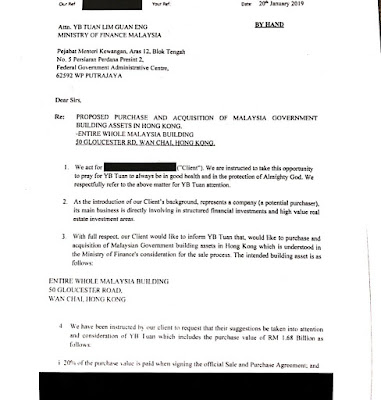 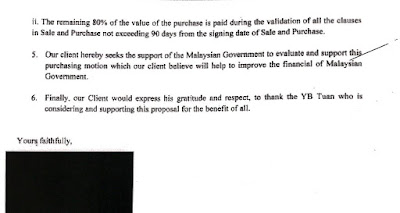 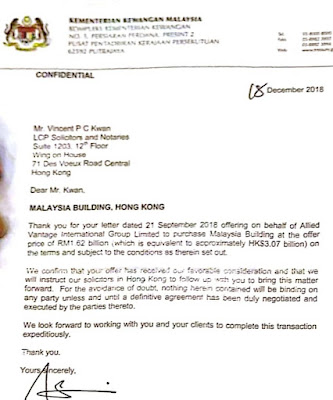 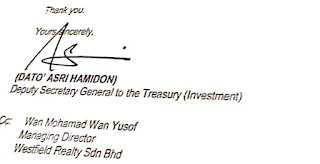 A young and well connected businesssman still insist the broker mistaken between RM and HK. Guan Eng failed to check on proof of fund and simply quote. Failed Finance Minister, Mahathir should drop him!

The following opinion in a WA group of young, multiracial and professionals.

There was multiple valuation on the said land. Looking at the highest valuation, that 1.1B was the price at that time including premium. Comparison between different timeframe should also be factored in. Hence, RM1.1B easily justified.

Direct nego are acceptable depending on the recommended strategy and existence of opportunity (better option) of the govt at that particular time. Open tender can be costly and time consuming.

Example: If there was an opportunity to purchase or build new consulate in HK, the window timeframe may suggest to accept the said 1.1B offer and purchase/build elsewhere.

Offer anyone can write. Close the deal first than boast. To determine how good any offer is, valuation must be shown for comparison.

Can LGE show valuation or baru nak buat? Or LGE have been talking about the land/building which he himself does not know the value.

As far as Rakyat understand, terowong Penang also went through so called Open tender process. Even that itself, as confirm by Hanifa Maidin 2 days ago as SAHIH, is under MACC investigation linked to few(5) DAP members.

How do you explain that today Equanimity is on direct nego? Why not 2nd tender?

How do you explain Tabung Haji selling its asset to Govt SPV, tender process?

Will MAS too be tender process? Or Malaysia as a country itself will be on international tender? Looks like it, PH jual semua harta milik kerajaan, bukan tambah.

BN attempt RM1.1b can be justified.

HK Asset open tender not necessarily most suitable option as it benefits international players. Offer should be made to Malaysian first. 😆.

There are CLEAR & STRICT guidelines by MOF on open tender, direct award & direct nego. It is not as straightforward as Guan Eng displayed. His interest was only politics, misguiding the public, and suspiciously, could be repeating another terowong.

As told to a friend, till he shows the letter, never believe what Guan Eng claim as having the proof. Out of 10 matters said by Guan Eng, you cannot believe 11.

The letter from foreign base broker mention YB Tuan! Wow they know the protocol very well.