Datin Yatie planned a 4-series interview for Dato Zukri Samat with Berita Harian, but the first serie interview is already a disaster.

Who reads BH anymore, Yatie? Utusan and Harakah has better reach than BH. 😊

Zukri lied to the public and TH depositors. The ex-Utusan Dato Zaini, now of BENARcom.my, tried to convince his readers that Zukri is a righteous person. Seriously bad judge of character and shows inability to see beyond facade.

There were many lies in the interview (BH taken offline but part.of it available below) that was blatantly made, but the major lies he made were:

It is slanderous to claim no provision made in the profit and loss account. Is this the accounting standards that Dato Zaiton Hasan and Dato Faiz Abdullah trained Zukri with?

In case, Zaiton and her toy boy, Zukri forgotten or pretend to forget their accounting, AFS means Available For Sale.

Section 22(1) of the Tabung Haji Act 1995 stated that hibah could only be paid from distributable profit and not from any excess of asset overliability with condition asset exceed liability.

Omigod... how could a former Bank CEO or CEO of any company not know this basic premise of distributable income.

Government dare not do RCI

Its too technical for public to appreciate and understand!

The gist is TH cannot change policies without agreement of Jabatan Audit Negara and MOF. They would look out for and could spot any valuation not done on asset and liability items in accordance with accounting policies.

The slight delay in hibah announcement for 2017, which Rafizi went to town with his slander, was due to getting JAN clearance. TH overprovide for impairment and need to readjust back to minimum balance calculatiin.

If the previous management did not abide with the policy approved by JAN, they commited wrongful. Police can press charges but they will not.

Otherwise, it is a matter of different accounting interpretation. As one neutral observor commented, it is about accounting policies.

There is no wrong but the authority is not PWC or MyPAC or MIA or EY, but Auditor General.

To get to the bottom of it and determine whether previous management did not abide with accounting policy, do a PAC or RCI...

Call in former CEOs, CFOs and Board of Directors for last 20 years because it is the same procedures abide to.

Bring Zaiton, Zukri and Faiz to answer why the inconsistencies and "bailout". Why latest account heard to only show receivable on the RM19.9 billion but no sukuk or i-RCPS?

Was none issued on December 28th 2018 in which the assets were transfered or more precise, sold to SPV? 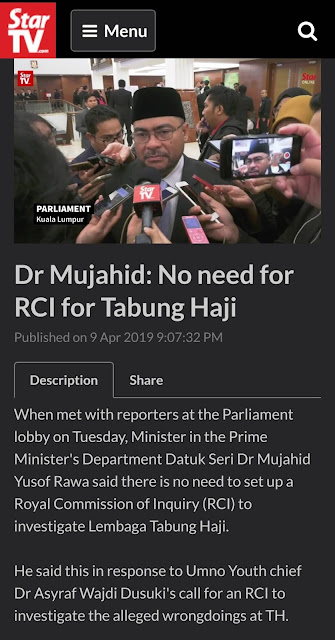 But Mujahid dare not. 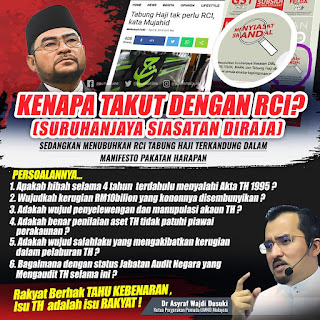 But why takut Mujahid?

Do they fear Ambrin or Tan Sri Mardinah will not play ball to lie according to Yatie's script?

No Banker of the Year 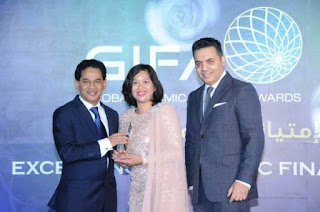 With Zukri's pathetic lies that an unqualified blogger can research to spot. hope he did not bribe his way to be Islamic Banker of the Year, which Zaini may have been easily impress.

As one experienced former Islamic Banker told yours truly recently, what Zukri did at BIMB was no feat.

Earlier, CEO Dato Noradzman did a major kitchen sinking and ruthlessly oppressed the staff with wrongful accusations with disastrous effect to the Bank, but got himself high pay and guaranteed bonus package.

He provided for bad loan without applying sensible judgement. It is heard he called it before the stated policy of late non-servicing of debt.

Zukri perpetuated the same and over provide bad loans also.

Subsequent year, he wrote back the bad loans, capitalise the Bank, expand branches, and give out more loans to make himself look good. Keling Kerala bunting also can do.

Zukri bankrupt innocent Managers using civil court to blame them for losses after they were cleared by enforcement agencies from any wrongdoings.

The blokes were too broke from long suspension to pay legal fee against multimillion dollar paid Skrine & Co. Hope it does not include bribe for judges.

Expect Zukri to do civil suit to bankrupt the former members of TH management, if police clear them, in which it is likely to happen.

Zukri is doing the same over provision for next year's write back to make himself Tabung Haji CEO of the year for 2019.

All this done on TH out of revenge for being thrown out of TH's Board of Director meeting.

He wanted to propose TH sell part of their equity in Bank Islam, but insulted the BOD for not trusting to reveal identity of interested party.

It will happen soon.

Through what happen at BIMB and now at TH, it is Yatie that have been concocting the slanders in the name of professional PR... Penipu Rakyat.

The following is her briefing prepared for backbenchers MPs but unlike BN days, opposition were not given briefing together. 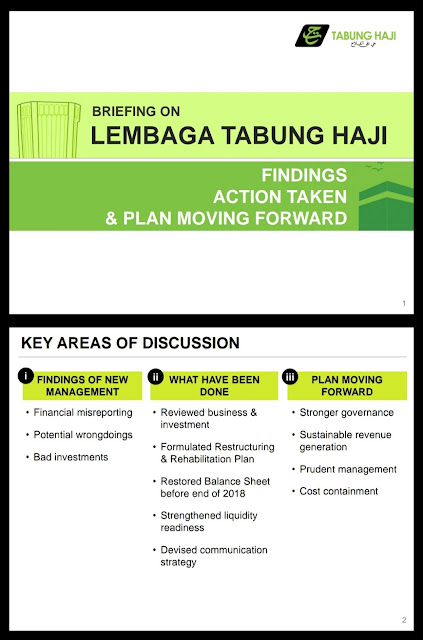 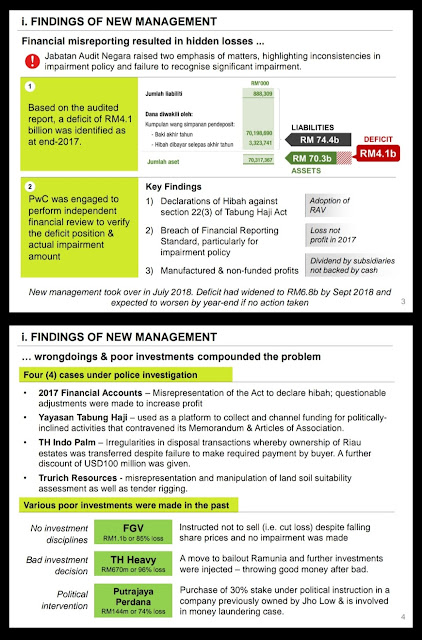 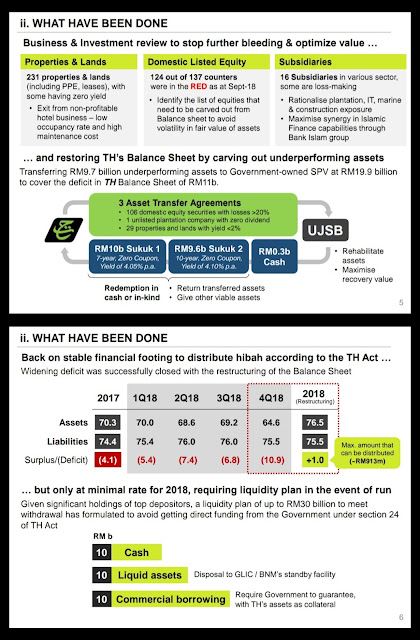 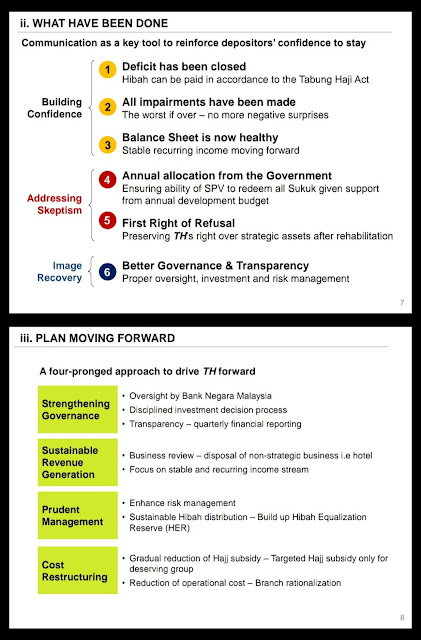 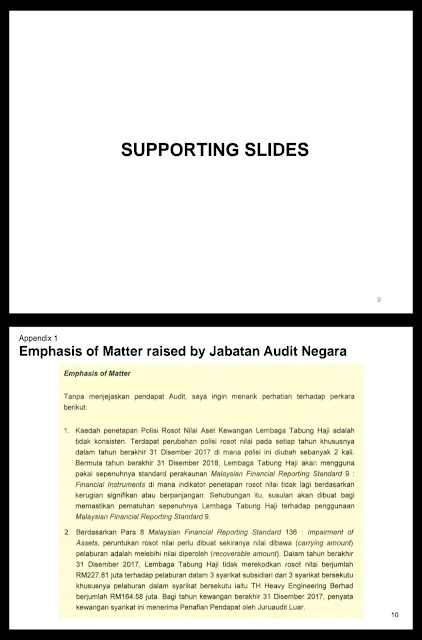 It is filled with presumptions, shallow lines being repeated verbatim, especially by PAN MPs, and claiming credit from past management effort.

Rocky Bru revealed Dr Zeti replied to answers from her letter to Minister and TH Chairman.

Despite refusing to meet TH people for explanation, and allowing her letter to Minister and TH Chairman viralled by Rafizi two days after letter delivered it, she claim convinced by effort by previous TH management.

Rafizi continued as a lie.

Actually, there are no issue but accountants obsessed with their own interpretations to fulfill their revenge. 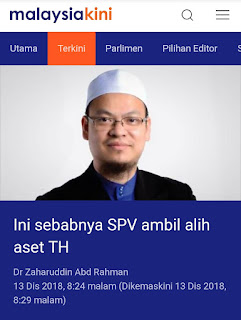 Yatie have been using Ustaz Zaharuddin as one of her voice. The decent looking Tok Lebai know nuts, claimed a Chartered Accountant familiar with TH.

He is no angel too, but part of Mujahid's band of skullcap-wearing bunch of lying PAN politicians. 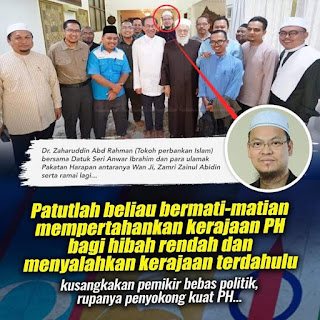 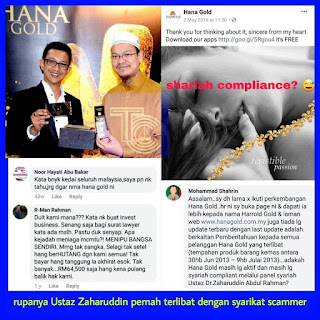 He subscribed to the rahmatan lil alamin mantra, which is not as it was meant to be.

They are compromising and destroying the position and interest of Islam in Malaysia with their naive and deviant liberal ways than uplifting its dignity.

It turned out Zaharuddin has no expertise and working experiance in accounting or banking.

He is merely trained as academic in theology with Phd in Islamic jurisprudence on Islamic muamalah specifically banking and finance.

He is a fake tokoh and premature to claim as one! 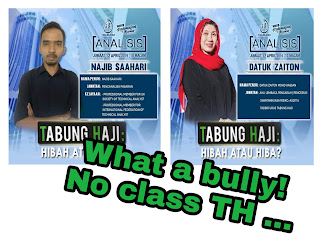 And, Yatie is trying to pit a giant to defend against a critical small young facebooker for a Al Hijrah forum.

What a bully can Yatie be. See it tomorrow night 10 PM.

Zaiton should answer for the conflict of interest in sukuk issue to her friend at Maybank, Imran of Offshorework Capital Sdn Bhd.

Only 10% recovered to TH, Bank Islam etc. 90% loss for a company that was in trouble at the material time, claimed an O&G industry player. 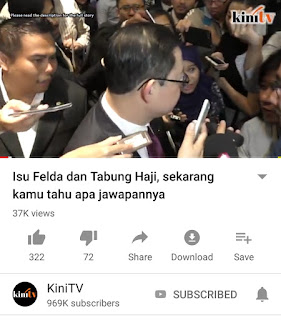 Guan Eng was asked by reporters of the RM1.5 billion government payout to SPV as revealed by Zukri in the BH interview.

He tai-chi to Azmin but it was MOF that decided. Prokhas is under MOF and Chan took instruction from Tony Pua on the Zaiton-Zukri-Faiz plan.

Why government need to give RM17.8 billion when government can give RM10 billion as proprietary funds into TH?

It is sufficient to close the big gap (of RM6 billion) due to PH fault for their pathetic management of economy and loss in investor confidence with Mahathir anyway.

With that RM10 billion, TH can buy new high yielding assets whilst turning around TH and subsequently, the RM10 billion could be returned to the government once TH is in a better position.

TH still control those assets. So government does not lose anything. Under Section 24, government has already gives guarantee to TH.

Give real cash to TH rather than just wothless shit of paper with no cash inflow.


Zukri have been dishonest to all Malaysian Muslim at large. As CEO of an Islamic institution, he should have been exemplary in communicating and propagating good virtues.

But instead Zukri repeated past habit at Bank Islam to openly lie, repeated wrongful presumptions to perpetuate and cover-up earlier lies, and concocted slanderous accusations.

For a 60 year old, which is supposed to be conscious of his deeds and the hereafter, he lacked the conscience and wisdom to differentiate between truth from falsehood, good from bad, right from wrong, and kindness from cruelty in carrying out his duties responsibly.

Void of Siddeq, Amanah, Tabligh and Fatanah, the not-so-tall and failure at CIMB Zukri is repeating his oppresive ways at Bank Islam.

Only Allah can save the soul of a person commiting zulm on the public and himself.

Zukri is only Mahathirs running dog. Ask him how he wrote off Khalid Ibrahim bad debt of RM80 million financing Guthrie's shares from Bank Islam? We all knew the bank was not owned by his father in Bachok of course.