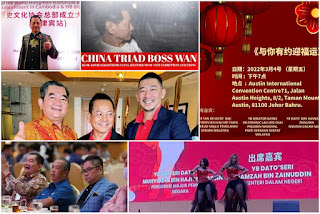 However, the ground campaigning and narratives for the first week is relatively subdued. One seasoned campaign operator sighed and described the state election as "boring".

It lacked significance to the current social, economic and political predicament of the day. There is insufficient emphasis on reviving Johor's economy and foreign investment.

Merely repeating GE14 campaign theme to attack heavy favourite BN using corruption, 1MDB and character attack.  Having failed as government, PH and PN ran out of ideas. They failed disastrously in a stream of by- and state elections. Yet still playing the same tune.

Those keen for a fresh story line should scutinise the PN's fund raising dinner at Austin International Convention Centre, Johor Baru on Thursday night, two nights ago on March 4th.

There are sordid going-ons and sensation to it which is representative of the wrongs of the PH and PN era of government.

The video of half naked girls dancing and flaunting their thighs and legs on stage attracted the social media.

Those not aware or refuse to believe Muhyiddin's infidelity should be shocked to see the son of a renown Islamic religious teacher of Muar clapping and enjoying the sight.

It is sacrilegious for the seemingly pious Muhyiddin to condone the girlie show in his presence.

The former Prime Minister read prayers during his live announcement during the pandemic, recently issued an edict claiming leaving UMNO for PN is encouraged by Islam, and call on Najib to feel shame for being convicted. 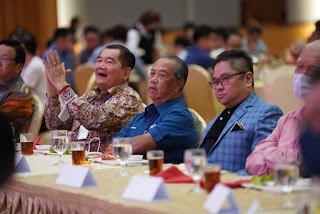 Muhyiddin should feel equally ashamed. The dinner is not WYSIWYG or what you see is what you get. The person next to him clapping with joy is Dato Seri Tan Choon Hwa or usually called as JP Tan. 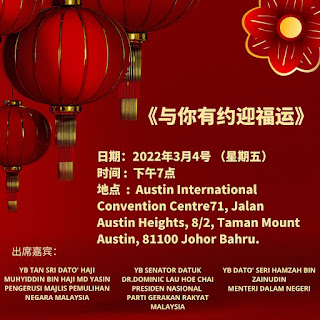 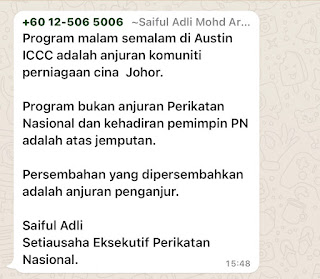 No name of the organisation mentioned. Or there is none?
A prominent Johor Chinese businessman shared the invite. He claimed to be invited by Gerakan office in Johor. 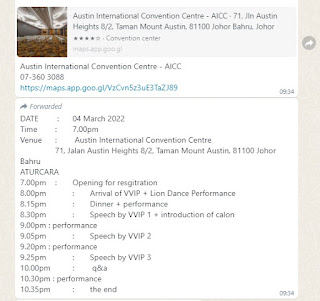 The schedule for the night is hardly a social event for Chinese New Year or Chap Goh Mei, but a political event to introduce PN candidates and political speeches.
Several video clippings of the VIP speeches have viraled. Among which are speeches by Muhyiddin and Hamzah Zainuddin.
Muhyiddin was in his political elements with subtle threats and scare tactics.
Wonder how would PAS feel now that Muhyiddin claim they stop demanding for hudud law or described in derogatory manner of potong tangan.
The bigger attention is on Hamzah's dark humour to insist audience clap the Home Minister's speech. It could be interpreted as a veiled threat to Chinese businessmen to support and vote PN.
Apparently, Hamzah instructed that no food served during the speeches so that the audience pay attention to the speeches. If that is the opening of the three VVIP speeches, the dinner could be organised at his request.
Gerakan has no money and footing in Johor to gather 800 "businessmen". Their candidate for Pekan Nenas in the three corner all Chinese showdown is not their member but an MCA frog.
The dinner has to be organised by a Chinese businessman or power broker with the network to do so.
JP Tan 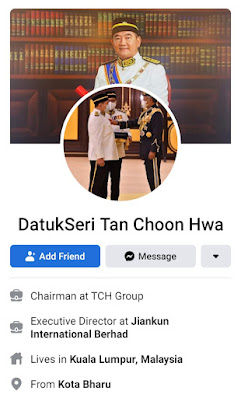 The person is believed to be JP Tan and done at the request of PN's Election Director, Dato Hamzah Zainuddin. However, credit was given to Gerakan and unknown "Johor Chinese business community".
One member of the audience claimed JP Tan is a businessman with interest in 10 public listed company. Since he is hardly known in the market as an operator or far from having the reputation to "goreng shares", the former MCA Kelantan leader is most likely a heavy market punter.
Other sources passed unsavory remarks of him and his reputation in Kelantan, but lets limit the description to him as having good PR.
He has  built good network of important people on both and many sides of the political divides by the unsophisticated approach of regularly entertaining them. He seemed to know quite a few people. 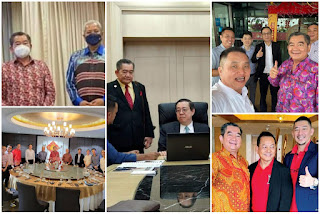 In the picture, he is seen with Kelantan UMNO leader and close friend of Hamzah, Tan Sri Annuar Musa, DAP's Lim Guan Eng and Lim Swee Lin, and other unidentified individuals.
It is the picture of JP Tan with Macau triad, Wan Kuok Kwai or infamously known as Broken Tooth that is disturbing.
Wan is notorious for his heist on Macau casinos and considered untouchable to local law enforcement. He was JP's partner in a local PLC.
The criminal was blacklisted by US treasury for corruption end of 2020. A November 2021 news reported Wan surfaced at the Cambodian casino scene.  Earlier in October, SCMP reported his link to Malaysian scammer Nicky Liow. 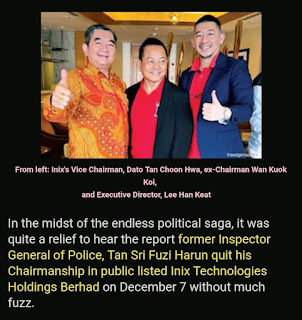 More than a year ago, this blog reported former IGP Tan Sri Fuzi Harun quit his Chairmanship in Inix Technologies Holdings Berhad upon knowledge that Wan is involved in the company.
Sources claimed JP Tan was a shareholder and brought Fuzi into the company.
An observer noticed associates of a market personality by the name of Kenneth Vun were among the attendees.
The 30-something Kenneth hails from Beuford Sabah and has acquired the reputation for securities fraud as the Malaysian John Soh. Edge Online reported him as the hands behind the surge in penny stocks at the end of 2020 before the pandemic.
Have Muhyiddin and Hamzah been associating with characters of repute through their tenure at Home Ministry?
Buying votes?
Another question is why did PN allowed a character of questionable integrity a role in their campaign fund raising dinner?
According to an attendee, each table is sponsored for RM100 to RM200 thousand. An observer doubted and believed it is sold for far less because the table are filled by company staff and the "threatening" presence of Hamzah made Johor companies obliged to buy tables.
Its possible the event was sponsored by JP Tan's business associates.
While 800 attendees are considered big, MCA have been organising larger dinners without much fanfare.  MCA and Najib are riding on a wave of discontent among Chinese voters eager to teach DAP a lesson.
Will the vote flow to MCA or remotely Gerakan is another question to be answered.
An amateur psywar video
Campaigners expect PN to splash money aggressively in the second week.
PPBM campaign is not doing as well and party insider expect to capture between 3 to 6 seats. PAS and Gerakan are likely to return home with eggs. The desperate Muhyiddin is expected to splurge money in Bukit Kepong and Bukit Pasir in the Pagoh parliamentary constituency to save face.
Sources claimed money have been channeled for distribution to Chinese and Indian temples and local welfare societies through a former local MCA leader still loyal to him. Fund raising dinner usually served to legalise money to be spent. 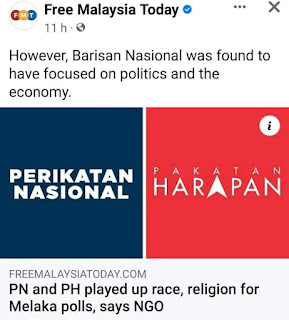 The problem with PN and PH campaign is that they are still harbouring on the same and tired message. It has failed to halt BN's political recovery.
One neutral voter sharing a Berita Penyamun poster commented, "Takda cerita lain" (no other story line). 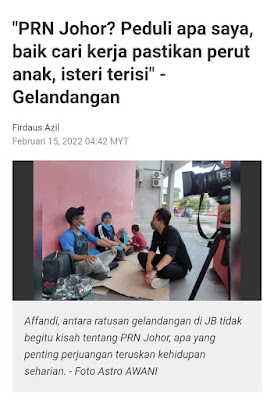 "Kluster mahkamah" is not a story line that sells at a time the economy tanking, and rakyat and country suffering from the unstable politics, and government machinery incapable of handling the fallout from the pandemic.

The coalition government is heedless because remnants of Muhyiddin's #kerajaangagal is still at large. His hands are still dictating Dato Seri Ismail Sabri from behind and need be chopped off immediately! 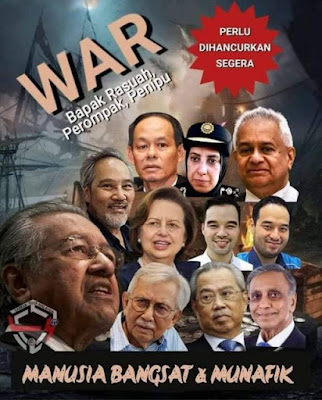 The development on the Tim Leisner revelation in US court have suppressed the usual reaction to harsh name callings of thief, no shame or corrupt levelled at Najib. The shock-and-awe of 2018 is not working.

Public seemed to be giving Najib the benefit of the doubt. Certain quarter of the public is beginning to believe Najib is a victim of Mahathir's fix-up and systematic execution. 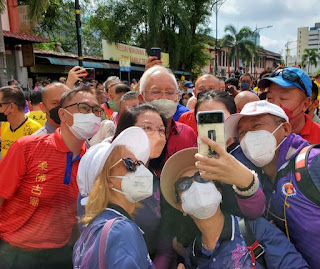 Boss Ku is today a crowd puller to Chinese voters. The anti-Najib wave of 2018 has reversed to a Malu Apa Boss Ku wave across all races, age and faith.

Continuing their campaign theme only kept BN winning elections since the Cameron Highland by-election till the recent Melaka state election.

The slight setback would be the Sabah state election, but it was a strategic error. Perhaps, to claim credit, the landslide Sarawak state election rode the same momentum too. 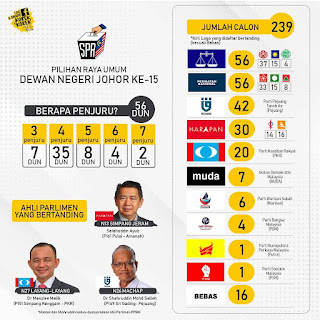 The earlier mentioned season campaigner's frustration is perhaps a positive indication that the campaign is easy picking for BN.

Gerakan, PAS, Muda, Pejuang and Warisan could be written off as insignificant. Party insider predict PPBM getting 3 to 6 seats. PKR could pick up a few seats.

Seats gathered by DAP will be the focus. How many would MCA regain?

Similar to Sabah state election, multicorner fights does not make it easy to plan and predict outcome. However, the difference between Sabah and Johor is the internal in-fighting in UMNO is significantly less in Johor. 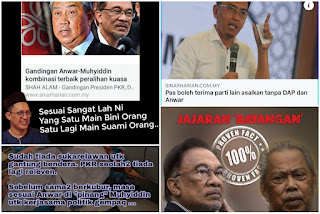 If there is the remote possibility of a close tie similar to Sabah, PPBM could join up with PKR. Muhyiddin have also been seen talking to Anthony Loke. 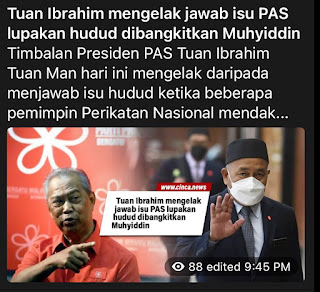 So where would PAS be? 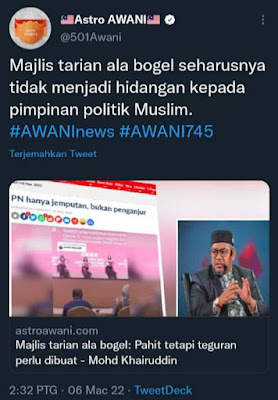 They are not amused with the girlie show.

The decision remain with the voters - whether the turnout is high or low. With campaign less lively, opposition fear a low turnout and are urging voters to balik kampong.

There are several reasons to view the campaign as less lively than usual.

Firstly, the rapid spread of the milder Omicron variant of the Corona Covid-19 is a concern. The SOP is more flexible than the snap state election in Melaka, but it could turn off voters.

Secondly, the country is suffering from political fatigue and voters are more concerned with their livelihood than politics.

Third and last, voters may have made up their mind. That is the most worrisome to any political parties. It is an indication that voters are set to swing for another wave.