After 30 years, timely "I told you so" on self sufficiency 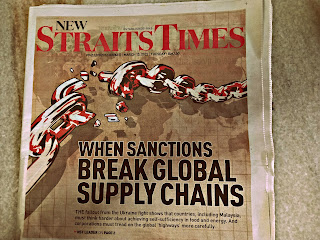 THE fallout from the Ukraine fight shows that countries, including Malaysia, must think harder about achieving self-sufficiency in food and energy. And, corporations must read n the global 'highways' more carefully. - NST LEADER March 15, 2022

Its odd that New Straits Times would put up its editorial as frontpage on Tuesday.

The owner of Media Prima is linked to Tun Dr Mahathir and he licked the globalisation mantra with its neo-liberal ideology to its last drop through his capital market driven economic policies and leaning for quick money business ventures.

His political diehards would disagree and stood by his Malay nationalism narratives. Naturally, the Perkasa activist will highlight Proton as though it is his shining example of success. However, what he said is not what he actually did.

Instead of improving the economic capability, and capacity with a comprehensively thoughout plan, Mahathir actually went to the contrary. Over 22 years, he was more interested to privatise government asset and services, in which the more precise description was piratisation policies.

His second return as Prime Minister saw him less subtle in his privatisation as Pakatan Harapan government sold off every possible national assets held by government institutions.

Mahathir was more of a quick buck artist and smooth talking politician than actually getting his hands dirty to build the domestic economy.

The NST editorial could perhaps be Mahathir realising his single minded ideas turned out to be long term disaster as globalisation ended with the breakdown in global supply chain.

Foreign dependency proves to be fatal without domestic economic activity to rely on.

This came after he announced not defending his Langkawi seat. Mortality is his new reality and the words of the late PAS President, Dato' Ustaz Fathil Noor turned out true.
He has lived long enough to see the disaster he brought to this country. And, Malaysians including you and me will suffer for supporting his greed. 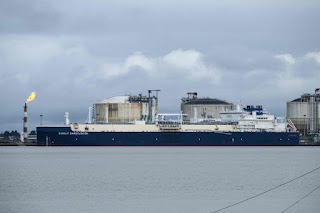 LNG (Liquefied natural gas) tanker Rudolf Samoylovich, sailing under the flag of Bahamas, moors at the dock of the Montoir-de-Bretagne LNG Terminal near Saint-Nazaire, western France. - Europe's dependency on Russian energy even caused the first crack in the West's unified response to Putin's aggression, with the EU this week shying away from a ban on Russian oil imports implemented by the United States and Britain.The EU imports about 40 per cent of its natural gas from Russia with Germany, Europe's biggest economy, especially dependent on the energy flow, along with Italy and several central European countries. - AFP pic

"THE inhabitant of London could order by telephone, sipping his morning tea in bed, the various products of the whole Earth, in such quantities as he might see fit, and reasonably expect their early delivery upon his doorstep."

That was John Maynard Keynes waxing lyrical about globalisation in his 1919 work, The Economic Consequences of the Peace. Today, with the war in Ukraine still raging, we have to read the book in reverse. Because an inhabitant of 10 Downing Street in London and several of his allies in Brussels and Washington are pushing the world to rethink globalisation.

Welcome to the world of insular nations. Or put differently, a world of many "Brexits". Living in such a fractured world will require drastic changes at the country and corporate levels. Start with the country level.

The punishing sanctions on Russia imposed by the United States, the European Union and their allies are a warning to nations which have grown dependent on the rest of the world from grains to gas. Self-sufficiency will be the clarion call.

Many are already beginning to answer the call. Move aside free trade, welcome protectionism. Granted, the pandemic gave an early warning of such things to come. But what is happening now is not just about clogged supply chains.

It's about food and energy security. Both are a part of a larger national security equation. True, no country can grow or produce everything it wants. But the West is now telling us there is grave danger in wanting what is grown or produced there.

Or in places where it is at war with. We may be able to get past affordability constraints, but not the availability issues. Malaysia must do some deep thinking about the consequences of war.

Perhaps it is doing so, but such thinking isn't visible to the Malaysian public. Invisible thinking doesn't encourage public debate. Malaysian policymakers must learn how to use the media to encourage such debates.

Sanctions on Russia are also a warning to multinational businesses. Consider Shell, Europe's largest petroleum company. On Feb 28, four days after Russian boots landed on Ukrainian soil, the oil and gas company announced that it would quit its joint venture with Gazprom, Russia's gas company.

A day earlier, BP said it was pulling out of its venture with Rosneft, Russia's state oil company. If The New York Times is right, Shell and BP pulled out because of "a sudden revulsion in dealing with Moscow as the Russian army assaults Ukraine". Where was the revulsion when the West attacked Afghanistan and Iraq?

The question has long ago answered itself. Shell and BP stand to lose billions of dollars invested in the two Russian projects in a tit-for-tat war of asset freeze between the West and Russia.

Petronas, Malaysia's most globalised company, may have been spoiled for choice before. Now it may have to worry if the choice may become spoiled.

That is on the energy sector.

Mahathir never had a throughly put together economic plan with clear benefit to the masses and ecosystem for benefit of small enterprises, but only good to the next launch.

He merely wanted them to work hard, but not to benefit and live comfortably from their effort.

He had a self serving and lazy thinking economic policies which resulted in the country becoming dependent on intermediate goods from abroad, foreign labours, and even imported food.

He preached on being meticulous and innovative, but the implementation of his policies does not systematically provide for innovative idea to be brought to the fore unless his cronies had a big chunk of the pie.

The buzz word seldom heard from accountants, bankers and corporatemen then on any economic initiative proposed was not to reinvent the wheel, but pursue the easier way of import or pursue FDI or get foreign principals.

It killed off the inventiveness, innovativeness and real entrepreneurship. After 30 years of trying, the white flag to promote self sufficiency and innovativeness have been flown before it is finally heard.

Throughout the 22 years, Mahathir's quest for industrialisation was merely copy pasting businesses or business models from abroad or taking over foreign companies with the hope it could bring about the quantum leap to a developed nation.

He was too impatient to undertake the painstaking organic development. His logic was an acre of factory provide more jobs than an acre of agricultural farm. Golf courses bring in investors and tourism money than a padi field. When there is food shortage, the golf courses can be reverted to padi fields. Will it ever?

So happen, Amanah MP YB Dato Mahfuz Omar exposed in Parliament of monthly golf allowances given to top civil servant in agencies under the Ministry of Agriculture. The amount can pay the monthly salary of two newly grad officers or several lower level staff. That was the extent of damage done by Mahathir's economic thinking.

In Parliament two days ago (refer to page 152 of Hansard here), the Ministry of Agriculture answered questions and food security is repeatedly mentioned. It is indicative of a bleak situation in which the country could be grappling seriously with food shortage.

No wonder Tun Daim Zainuddin was talking about agriculture sector when he was brought back as adviser to government.

Government been too carried away with Mahathir days' wrong policy for price control and keeping cost of doing business low that he foresaken food supplies availability and self-sufficiency.

Its for all to see that Mahathir's quest for industrialisation to meet globalisation trend may not be able to feed the rakyat!

It's good to see that finally malaysians understood about food security. But as usual the not good part is malaysians always realize it when it is abit too late.