Will PRN Johor be Muhyiddin's Waterloo? 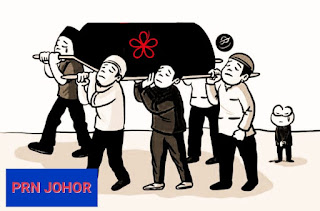 Johor voters will be casting their votes today.

Stream of traffic on the highway and people crossing in from Singapore was reported by media yesterday evening.

It could be a sigh of relief for the opposition (both PH and PN grouped together as one). It was Chegu Bard promotion in the early part of the campaign with the political twist to not return Johor to BN.

If the voters' turnout is low, as happenned in Melaka, it would favour party with the strong base such as UMNO and BN generally. On the contrary, the opposition would like to believe that the more enlightened outside voters will lean towards them.

However, it may not necessarily be so. From sources claimed to have inside into BN political planners, they are equally comfortable with a good turnout.

It means the older and more Covid paranoid of Chinese voters would come out to vote and it could spell the end for opposition.

The economically less government dependent Chinese are pissed as hell with both PN and PH, especially towards DAP for Tan Sri Muhyiddin's abuse of the emergency for his political survival and both weakened the economic structure to near smitterens.

DAP Johor's Liew Chin Tong could dispute the emerging Chinese sentiment using conspirational twist but the fact is both PN and PH are aggressively pursuing the passively responding Chinese voters.

Their behaviour seemed to be they have made up their mind.

Chin Tong maybe hitting at Dato Nur Jazlan because the two may cross swords for GE15. Perling is in the Pulai Parliamentary constituency. Should Salahudddin Ayub decide to seek reelection, he will fall  victim to the Timah whisky issue he created.

Nevertheless, Chin Tong is partly right to deny substantial amount of Chinese voters will vote BN. If the Chinese decide not to come out and vote, then he could be right. It quite likely a substantial number of Chinese will boycott all "Chinese political parties".

But if the Chinese decided to vote, they should rethink of their attitude towards MCA and give the younger and clean slate candidates with quite impeccable resume a chance.

That begs the question: Will it be the end of Muhyiddin's political career or another way of saying it, is it his Waterloo?

The Battle of Waterloo in 1815 was the battle French conquerer, Napolean Bonaparte loss in Belgium and marked his end. Few years earlier in the winter of 1812, his 600,000 men army face a crushing defeat to Russia by Czar Alexander 1's scorched earth strategy.

To some extent, BN, who came under heavy shelling from PH had systematically been employing tactical retreat and guerilla strategy on PN and now ready to pound them into the freezing cold.

If they make it well in Johor, it spells the end of Muhyiddin and PN.

BN and particularly UMNO have been confident of doing well in the current Johor state election. Their forecast of seats to win have been escalating from the 30s to two third majority and into the 40s out of 56 seats being contested.

The straight line projection is taking their confidence to the level of targeting 50. Its a bit absurd and not a comfortable prospect to have a state assembly of practically no opposition.

It is no more the era where putting up a songkok could win one the election. The trend is slowly inching away from party centric to individual centric.

However, the current Johor PRN could return BN handsomely simply because PH and PN was just too bad.

In Johor, PPBM offered two incompetent state assemblymen as MBs and it was palace intervention to insist for political stability that made Muhyiddin relented to appoint engineer Dato Hasni as MB.

Despite Dato Ismail Sabri's MOU with PH, political stability was still not achieved. PH rejected the state budget and it needed the Amanah Speaker support to get it passed through the assembly. That was it and Hasni decided to dissolve the assembly to return the mandate to the people.

Hopefully, it answers to Syed Saddiq's put up act in Parliament with his wastage argument on Thursday. It is the same campaign theme PN have been going about town with "kluster mahkamah" to spice up their story. PH and Pejuwang was using the same theme too.

Through the campaign, the opposition was still pursuing the 1MDB and Najib theme that failed them in Cameron Highlands, Semenyih, Rantau, Tanjong Piai, Kimanis, Slim, Sabah state election, and Melaka state election. As much as PAS campaigner hope it could by using the argument that a lesson needed to be learned from the episode, it is a tired line.

The expose by Tim Leisner, and wrongdoings of Zeti and Nor Mohamed Yakcop have raised public doubt on the court decision, and the investigation of the 1MDB debacle.

Increasingly, there is a rising believe that Dato Najib was victimised or made a scapegoat with judges and the judiciary system an accomplice.

Muhyiddin have been unusually aggressive and its only his voice that is heard in the media.

Such aggression will not go down well in Johor. Save for GE14, it is relatively a politically mature state.

More so, the problem is Muhyiddin's claims have no credibility and can be immediately doubted on. In fact, he was claiming credit for effort and initiatives he was absolutely against and has no capacity to do such as EPF withdrawal, HSR and etc.

He abstained from a debate challenge on Felda from Najib simply because the full of rhetorics and excuses Muhyiddin is not known to be detailed and meticulous in his understanding and handling of issues.

He could feel his days are numbered. If he failed in Johor, he will not only not be Johor Economic Adviser or not make a comeback for Prime Ministership, but will be tarred and feathered till the end of his life.

Unless the cash advance "economic policy" of PN put into effect was effective, even PAS forecaster is expecting PN to win only 3 sets. One insider of PPBM puts it at 6.

However, the forecast is rather over optimistic for PH to secure 10 seats. Perhaps, its possible for PKR, DAP and Amanah.

Whatever it is, PN's possible win will only be from PPBM. Muhyiddin is aggresively showering Bukit Kepong, Bukit Pasir and Bukit Gambir, and opening the recipients to the risk of AMLA investigation in the future.

If PAS has any chance, it is a one seat in Segamat and not the old candidate they bank on in Maharani.

Apparently, there have been friction between PAS and PPBM. PPBM been relying on PAS machinery but yet PPBM machinery expect to be paid by PAS for supporting their candidates.

That talk is possible because Hamzah is strangely aggressive in leaning to promote Gerakan candidate. The joke within political circle is trying to raise Gerakan political profile is somewhat getting an erectile dysfunctional organ to return back to its heydays.

Gerakan's candidates in Johor are expired MCA candidates. Contrary to the high ideals of the political naive, Dr Dominic Lai, among their candidate is an illegal gambling operator.

Perhaps, when it come to money, he is not naive to realise Hamzah willingly oblige them. One wonders whether it went into the campaign or elsewhere.

So, will UMNO achieve the two third majority its members think it could emulate UMNO Melaka?

As Tok Mat puts it subtly, UMNO have passed the required mark and it means forming the next government.

The two third could be challenging. There are lots of 50:50 seats due to the multicorner fights. For only weather reason, the result could tilt one way or another, and won by unexpected candidate.

More so, the pursuit to be candidates in BN have been overly competitive.

And, none more despicable than one Division Chief in the northern region willingly pushed for an MIC candidate for a Malay majority area for the former MP to deny another and more popular former MP.

During the campaign, he sabotaged the good choice of candidate put forward by MIC.

Such nonsense in UMNO is still much at large in Johor. There are widespread cases of Division Chiefs pulling the brake on campaign for the simple envy of their preferred choice, including themselves, not chosen.

A Minister supporting a Division Chief campaign and not assist a Puteri UMNO candidate to enable the Chief to win and not encroach into his or her Parliament candidacy.

Frankly, UMNO could win two third. If they are unable or denied majority or even lose the election, it is their own doings.

However, getting anywhere between 30 to 35 seats is enough to say good riddance to the egoistic, arrogant, corrupt and vengeful Muhyiddin.

"Increasingly, there is a rising believe that Dato Najib was victimised or made a scapegoat with judges and the judiciary system an accomplice."

How true. He could be PM again.