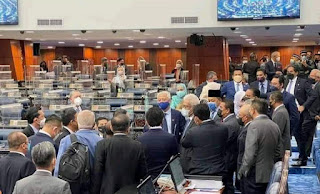 In his twitter, former IGP Tan Sri Musa Hassan listed 6 responsibilities of citizens on national security. The primary being to elect MPs that pass laws to ensure public safety. Read on here.
Yesterday, 50 MPs failed to attend Parliament. According to a retired DG of a government agency in our WA group, 30 was from the government side. As a result, the motion for the 5-year renewal of sub-section 4 (5) of the Security Offences (Special Measures) Act 2012 (SOSMA law) was rejected.
Backbencher leader, Dato Tajuddin Abd Rahman failed disastrously in his role. The more serious implication is detected subversive activities detrimental to national security could not be averted and will endanger public safety.
Since the repeal of ISA, SOSMA was passed to fill up the role. Opposition brushed it as similar to ISA and a law for "detention without trial". Musa denied in another twitter here. Unlike ISA, the 28 days detention required court order and needed to enable investigation on public security.
Similar to Johor state assembly incident, opposition breached the MOU term agreed between government and PH to support all motion involving government matters.
In Johor, opposition rejected motion to pass the state budget that could cripple state administration. This time Parliament could not continue with an existing security law thus risking the public and country to criminals and terrorists threats.
This highlights the fact that the current government is walking on thin ice and unstable to carry on.
It is unstable and in this case, by mere opposition's unwillingness to cooperate. Similar to Johor, a new mandate from voters should be seeked upon.
Bubar?
To be continued
MOU 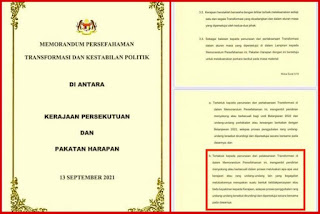 According to Tan Sri Annuar Musa, whose instrumental in negotiating the MOU with PH, article 3.3 (b) PH agreed to support or abstain in any motion put forward by government in Parliament i.e. no opposition.
Their action to defeat the extension of the SOSMA law breached the MOU, thus making it null and void.
Annuar went further to threaten that the Prime Minister has the liberty to carryout the mandate of the recent UMNO General Assembly to dissolve Parliament and seek the concurrence of Agong to call for a general election.
Opposition had disrespected the wishes of Agong for an MOU to ensure stability of government. This gives no reason for Agong to not ascend to any request.
DAP's new Secretary General, Anthony Loke denied the MOU was breached with the excuse it is within the MP's right. PKR's Communication Director, Fahmi Fadzil said it is not part of the matters deliberated in the MOU.
Annuar responded to their responses to question the intention of opposition to refuse four late arrival government MPs from voting.
No detention without trial
Understandably, the opposition spent a lifetime opposing ISA. They would naturally be against any similar law irrespective of its security needs.
During Mahathir's administration, he repeatedly abused ISA whenever he is under political threat.
They were esctatic to win the voting yesterday and would unlikely not to vote against in the subsequent readings.
The amusing incidence was Deputy Minister in the PM Department in charge of law, the recently labelled musibat, Mas Ermieyati attempt to postphone the second and third reading. Expectedly, it was vehemently opposed by opposition.
It is clear PPBM fear to face a general election after repeatedly defeated at by-elections and state elections.
Nevertheless, it is another clear intention by opposition to refuse the government motion.
Vote of no confidence
This loss is considered as a vote of no confidence against the government. This brought about an about turn from Dato Nazri Aziz, who defended against call for dissolution of Parliament at the UMNO GA four days ago.
Annuar's response to the bill's defeat in Parliament was ambigious. 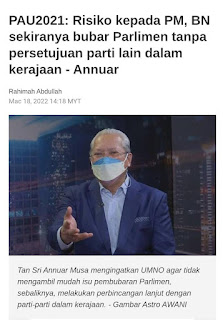 There was no hiding of his intention to reject the call for the dissolution of Parliament by Dato Mohamed Hasan. He justified his argument based on the MOU.
He was the proponent for UMNO election before GE15. Several UMNO leaders are in the same camp with Annuar.
It is speculated the white envelope mentioned by UMNO President, Dato Ahmad Zahid Hamidi in his speech contained money from a "certain prominent leader" through their "agents" to buy support to pressure for an early party election.
Pro-Pejuang writer. Raggy Jessie Rithaudeen viewed Prime Minister Dato Seri Ismail Sabri managed to "tai chi" his way out of committing to dissolve Parliament. He said on You Tube that both Ismail and Zahid gave glimpses but no firm commitments to dissolve Parliament and for Ismail to remain PM, respectively.
Till today, sources in PWTC viewed Ismail's speech at the UMNO GA indicate no willingness to dissolve Parliament unless his position as UMNO President is secured.
Postphoning GE would repeat the same strategic mistake made by Dato Najib to prolong GE14 to 2018. It was at the advise of Tan Sri Noh Omar, who convinced him of a possible delienation exercise for Selangor.
Both PH and PH together with other possible combinations and surprises will have time to regroup, get their act together, and pushout their narratives.
If Ismail delay the party's plan for his selfish reason, it slow down BN's momentum and lose the current advantage. It could even cost BN GE15 and he will be crucified at the party election.
Words heard Ismail seeked support from an East Malaysian state to not dissolve Parliament. Sabah suffered a bad Covid spread after its state election. While, Sarawak is still recovering from the fatigue of the landslide at the recent state election.
Anti-hopping law 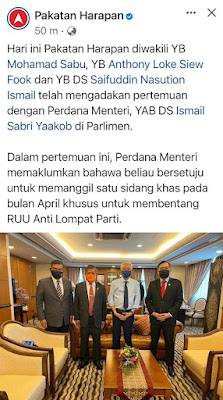 The indication to support speculation Ismail is adamant for party election before general election was his willingness to persuade opposition leaders with a special parliamentary session to table the anti-party hopping law in April.
This was suggested by Nazri in Parliament.
Over the weekend, Lim Guan Eng questioned why the no anti-hopping law not tabled for the March Parliament session at the DAP Congress. It was agreed in the MOU.
Failing which, government side has breached the MOU and it ends immediately.
Ismail's move could be cynically interpreted as buying time. It is clearer that PKR, DAP, and Ministers cluster feared holding the general election in the immediate future.
Annuar's argument are mere excuse. Generally, delegates at UMNO GA viewed the MOU cannot supercede the constitutional power of PM to seek Agong concurrence to dissolve Parliament.
This is consistent with the views of Loke and Fahmi. According to the constitution, the MOU could be deemed as ultra vires. Null and void!
Either way, return the mandate to the people. Country is in a crisis. It cannot afford indecisions, directionless, and disunited government.
Updated: 2:50 PM 24/3
Second update: 8:22 AM 25/3
at 3/25/2022 08:26:00 AM