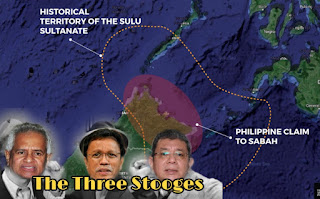 In October 2018, former Foreign Minister Dato Anifah Aman traded barbs with then (and returned again) Foreign Minister, Dato Saifuddin Abdullah in the Dewan Rakyat.
Anifah advised Saifuddin to listen to his officers at Wisma Putra. It was his subtle way of telling Saifuddin does not know what he is doing. As a new broom, Saifuddin was making changes to his own fancy at the Foreign Office without understanding its implication. The Malay described it as memandai.
It was in reaction to Saifuddin's use of a phrase which to the effect means Malaysia's New Foreign Policy. Foreign policy should not be changed for sake of political expediency and in reaction to changes in government.
Saifuddin took a swipe to correct Anifah that the term used was New Malaysia's Foreign Policy. Naive but yet egoistic, Saifuddin failed to realise that was what it implies.
Throughout his twice tenures as Foreign Minister, the PPBM Minister put Malaysia in several diplomatic embarassments.
The latest is the mess from his poor handling of the claim on Sabah by the Phillipines two years ago, which he allowed involvement of former Sabah Chief Minister, Dato Shafie Apdal's and fomer Attorney General, Tommy Thomas.
US$14.92 billion claim 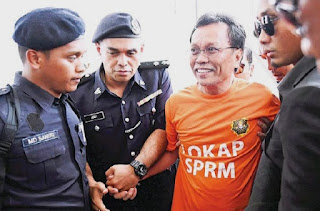 Ignorant of the language and practises of diplomacy, Shafie wanted to be a Sabah hero by going into a "discussion" with the complainant and resolve a long standing sovereignty issue.
Tommy responded to a claim for annual payments at a Spanish Court with a letter, which was used by a French arbitration Court to rule Malaysia owed the Sultan Sulu descendents US$14.92 bilion.
This blog wrote of it back in September 2020. Extract below: 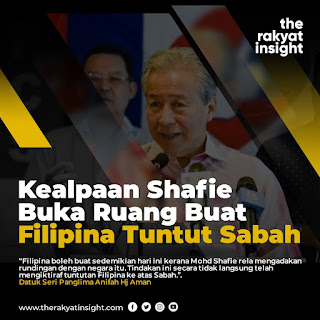 Their (Phillipines) aggressive stands may have been encouraged by Shafie's naivety to send Sabah state legal officio and ex-officio as observer to attend an event on their claim on Sabah. 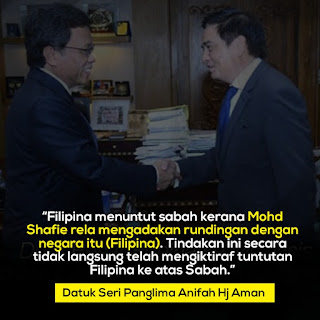 In the first place, Malaysia never agreed to go the arbitration. The agreement to pay was an ex-parte agreement.
The so-called descendent could not prove their right to claim and it was the reason Malaysia stopped making any payment. This was established and ruled in our favour in the Spanish Court.
Tommy's legally naive letter 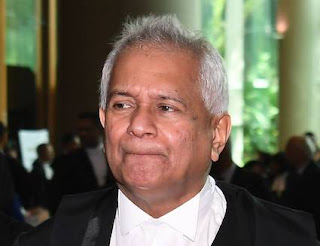 Since Gustavus Baron de Overback is legally a French citizen, the claimant brought it to the French court and used the following letter from Tommy Thomas: 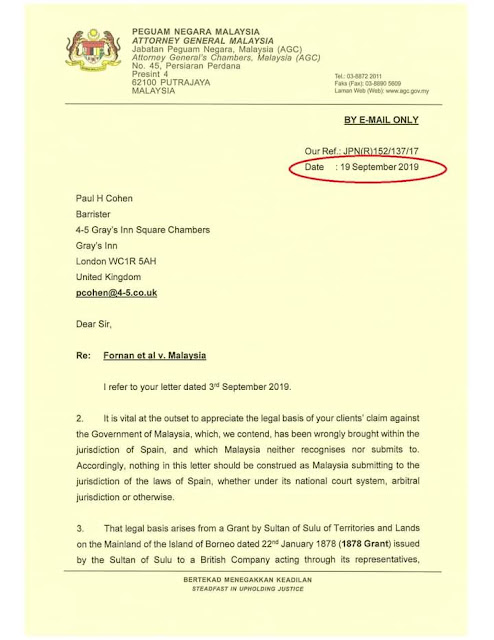 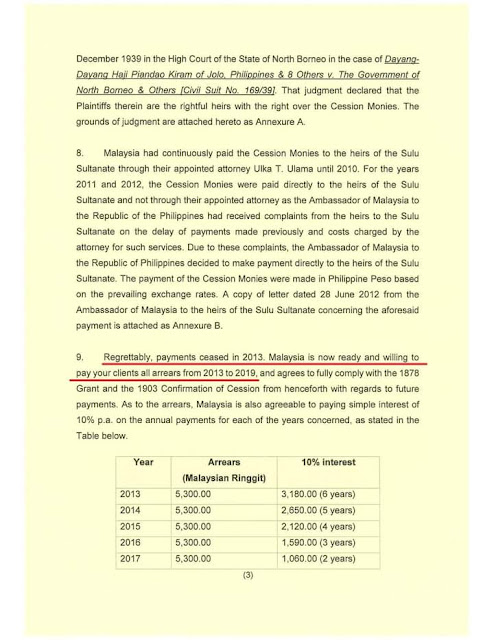 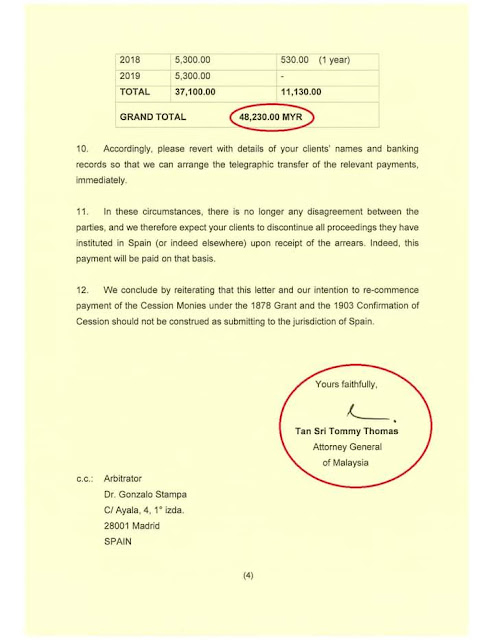 How clever is the legal mind of the oftenly dubbed constitutional expert by pro-PH NGO?
No basis
The Malaysian government have filed for a criminal complaint against the French arbitrator Dr Gonzalo Stampa for non-compliance with the Spanish Court Order.
Minister Dato Seri Dr Wan Junaidi explained in a press conference on March 10 recently, below:
Dato Najib and Dato Anifah gave both Shafie and Tommy Thomas a drubbing for their recklessly naive effort. Najib's FB comment here and here.
While Anifah's statement in full below:

Sabah, which was known as North Borneo, before it joined the Malaysian Federation in 1963, was part of the Sultanate of Brunei in the 15th century. In 1704, the Sultan of Brunei ceded the lands east of Marudu Bay to the Sultan of Sulu, while the west coast remained under his rule.

On 22 January 1878, the Paduca Majasari Maulana, Sultan Jalalul Alam, Sultan of Sulu entered into an agreement with Baron de Overback and Alfred Dent of the British North Borneo Company. In 1946, the company surrendered the territory to the British Crown after it was unable to reconstruct the shattered state after the war with the Japanese.

According to British Archives documents, the 1878 Agreement between the Sultan of Sulu and Baron de Overback stipulated that the Sultan cede the territory in North Borneo in perpetuity. Under the Agreement, the heirs and successors of the Sultan were entitled to receive the sum of five thousand Mexican pesos annually and accruing from the supplementary deed of 1903, an additional sum of three hundred was given annually – thus bringing the annual payment to five thousand and three hundred.

Sultan Jamarul Alam died in 1881 and was succeeded by his son Badrudi Din who passed away in 1884. When the Spanish Government intervened and appointed the unpopular Sultan Datu Harun ar-Rashid in 1886, there was considerable disorder. Finally in 1894, the succession of Sultan Jamalul Kiram was recognized by the Spanish Government until the time of his death in 1936, he enjoyed the monies payable under the terms of the deeds of 1878 and 1903.

In November 1919, Sultan Jamalul Kiram made a will on the disposition of his property in the Philippines, Borneo and Singapore. He named his niece, Dayang-dayang Hadji Piandano Kiram for half his estate and another half to be divided between his other two nieces, Putli Tarhata Kiram and Putli Sakirnur-in Kiram. Sultan Jalalul Kiram died in 1936 and the payment was stopped until 1939 because he had no heir. The death of Sultan Jamalul Kiram created confusion.

Firstly, the Philippine Government would no longer recognize the title of Sultan or attribute to the holder, i.e. to anyone recognized by the people of Sulu as Sultan, any of the attenuated prerogatives enjoyed by the late Sultan Jamalul Kiram. Secondly, complications developed on the distribution of cession money.

Finally, in a judgment made by Judge C.F. Macaskie, Chief Justice of the High Court of Borneo on 18 December 1939, nine persons were entitled to the cession money including the three nieces mentioned in Sultan Jamalul Kiram’s will.

The Malaysian Government pays the cession money annually to the heirs of the Sultanate of Sulu since 1968. Based on the Macaskie Judgment, there are nine heirs. By this time they have all passed away. At present, all the cession money entitled to the nine original heirs are taken over by their administrators.

Towards the late 1990s, there were efforts by the Philippine side to unite the Sulu Heirs surrounding the propriety claim. The purpose was to ensure a united outlook among the heirs and for them to have a common platform and greater leverage in dealing with the Aquino Government on their propriety interests as well as in the negotiations with Malaysian Government on the settlement. It could not be ruled out that the efforts were largely driven by monetary attractions in view of the expected substantial amount of settlement money that would be involved.

The emergence of various claimants being the Sulu Sultan are a product of misinformation and misinterpretation of the spoils of the claim. The “fake” Sultan believes that all the riches of the claims will come to the Sulu Sultan. Hence there is a long queue clamoring for the “crown”.

On 9 February 2013, 235 people claiming to be members of the “Royal Sulu Sultanate Army” staged an armed intrusion in Lahad Datu. The attack was met with armed retaliation from the Malaysian authorities after negotiations towards a peaceful surrender over the period of about one month failed.

I've always maintained that we do not recognize and will not entertain any claims by any party on Sabah.  Sabah is recognized by the United Nations (UN) and the international community as part of Malaysia since the formation of the Federation on 16 September 1963. The people of Sabah chose in 1963 to form Malaysia instead of being part of the Philippines.

·   During my time as the Foreign Minister, Philippines was never this bold unlike current times. This was brought on due to the Sabah caretaker Chief minister two years ago recklessness in acknowledging the claim by wanting to discuss and negotiate with Philippines which automatically acknowledges the claim whereas my approach which has always been the right approach was not to recognise any claim.

·   At the time I advised the then caretaker chief minister to take time and learn the language of diplomatic relations and how to handle international relations to avoid further blunders in future with regards to our Sovereignty. This advice also applies to the then Attorney General Tommy Thomas as well who did not think of the implications of his letter to Paul Cohen which was also copied to Dr Gonzalo Stampa the arbitrator.

·    I’ve said this before, and recent events only proves that what I had warned the then Federal and State Government of has happened. 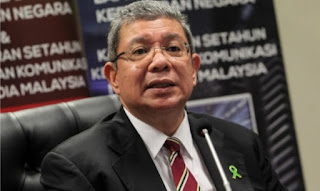 Its really puzzling why the failed PM and losing poster boy for PN at the Melaka and Johor state elections, Tan Sri Muhyiddin Yassin was adamant in retaining Saifuddin as full Minister. He also negotiated for the incompetent and embarassment of MCOBA to return to the same Ministry in which he had a long and still growing list of boo boo.

Latest is his appointment of former actor and film director to do diplomacy under pretext of cultural envoy. This was among the reason he is constantly at odds with professional diplomats in the Ministry.

Saifuddin have been undermining the Ministry's Secretary General to undertake organisational restructuring and dictating communication at Wisma to his whim and fancy.

The Foreign Ministry is now more a Human Rights Ministry and uninterested in taking care of Malaysia's interest in international relation.

Wisma's indecision or likely to be precise, Saifuddin's indecision resulted in the late removal of Malaysian Embassy staff and citizens from Kyiv with four Malaysians reportedly still left stranded in Ukraine.