UMNO PM should be subjected to 3-yearly review 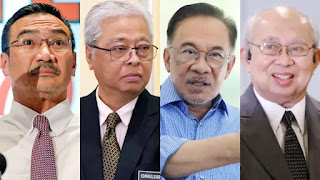 While scrolling the alerting notifications in the smartphone this morning, came across an interesting article on Newswav app from TwentyTwo.my entitled, ‘Political parties face shortage of credible candidates for future PM’ by Pearl Lee.

In August 2021, Agong was faced with the same dilemma when his majesty requested for proposed PM candidates to replace Tan Sri Muhyiddin, who was then on the verge of resigning following 15 UMNO MPs withdrew their support.

Talk of the devil, words reached yours truly that Muhyiddin met Tun Dr Mahathir the Friday before this blog's Langkah Carey Island posting.

He repeated his desire to be PM again as hinted during the Johor PRN campaign trail. According to the source, Mahathir merely smile without neither agreeing nor disagreeing.

Coincidentally, the subject of who to be UMNO's nominated PM for GE15 came up over Sunday tea in the conversation on the latest update post-UMNO general assembly in Bangsar.

Does UMNO has the answer to the nation's desire for a credible leadership capable of solving the current slide and the social, economic and political predicaments arising from the structural breakdown brought about by PH destructive tinkering, global Covid 19 pandemic phenomenon, and PN's failed government?

TwentyTwo.my article reproduced, as below 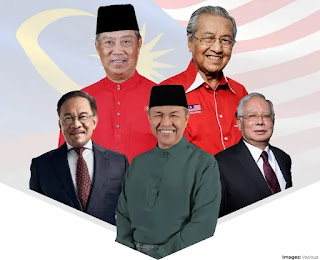 Political parties in the country are in dire need of a transformation as they have failed to groom new leaders to lead the country.

With a general election on the horizon, it appears that both the government and opposition do not have the right candidates to push for the position of prime minister. Parties are banking on the same candidates, over and over again.

Associate Professor Dr Azeem Fazwan Ahmad Farouk said Malaysia needs energetic and progressive leaders. The need for them to be properly groomed and moulded to lead the country is more pressing, now than ever.

“If you look at countries like New Zealand and Canada, you have young people running the country. In Malaysia, those who are in their late 40s are nowhere to be found,” he said.

“We have had the same people helming political parties for a long time. (Tun) Dr Mahathir Mohamad has been in politics since the 1960s … And then you have (Datuk Seri) Anwar Ibrahim, who came into the fray in the 80s. Even (Lim) Kit Siang (who recently retired) has been there since the 60s.”

Azeem, who is director of Universiti Sains Malaysia’s Centre for Policy Research and International Studies, says Umno is plagued with the same problem, with no solution in sight. 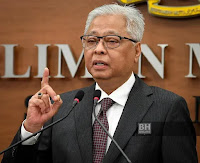 “(Datuk Seri) Ismail Sabri Yaakob himself is just an interim Prime Minister. His approval rating is not known, as no polls or surveys had been carried out to measure how popular the current government is. Unless we know how he is perceived by the people, he will only continue his term as PM up until Parliament is dissolved.”

He said while current “poster boys” Datuk Seri Najib Razak and Datuk Seri Ahmad Zahid Hamidi are popular within the party, they are both facing charges in court.

“He (Najib) is definitely not the choice for urban voters. But at the same time, you cannot rule out the fact that he could be Umno’s trump card as he is popular in rural areas. Judging by the behavioural patterns of the electorate in Johor and Melaka, it appears that they are unfazed by the court charges levelled against Najib, and his conviction. It no longer matters,” he said.

Azeem added that while other Umno leaders like Datuk Seri Hishammuddin Hussein and Khairy Jamaluddin are both potential PM material, they have been sidelined by their own party.

“Hishammuddin, despite his previous keris-wielding incident, is a moderate leader. He is not a racial, or religious hardliner. But he does not hold any position within the party hierarchy and is not in the good books of (Datuk Seri) Ahmad Zahid Hamidi.”

“He (Khairy) is a very progressive man and could be among our next generation of leaders. He has what it takes to be accepted by all, not just the Malays. But despite being very urban, sharp, and hardworking, he is just not trending within Umno.”

[NOTE: Khairy could do the unexpected to seek for another platform outside UMNO to serve his ambition. It could be in the same manner he pulled a surprise to run against Zahid for the UMNO Presidency.]

Even opposition parties are guilty of not wanting to let go, or simply not having enough young leaders who can lead the country.

“While Anwar will remain PKR president, I am not sure if he will still be seen as a ‘PM in waiting’. Prior to GE14, the opposition had always touted him as their PM candidate, but it has never worked out in their favour, especially among the Malay voters.

“Anwar’s aura is no longer what it used to be. Look at how he had campaigned in Melaka and Johor. Look at the end results. But who else does PKR have right now?”

He added that neither Nurul Izzah Anwar, Datuk Seri Saifuddin Nasution Ismail, nor Rafizi Ramli of PKR had what it takes right now to be the prime minister candidate for Pakatan Harapan.

“Realistically speaking, Pakatan Harapan will have a tough time nominating a PM candidate in the next GE. No one is going to vote for the opposition if (Amanah President) Mohamad Sabu or (DAP secretary-general) Anthony Loke were to be named PM candidate for Pakatan.”

Azeem said Dr Mahathir too, had completely lost the plot, as evidenced in the Johor election when Pejuang was roundly defeated.

He added that Tan Sri Muhyiddin Yassin’s Bersatu too, is at risk of facing a wipeout in the next GE.

“It is a sad situation that the political parties in the country have failed to groom future leaders who can take over.

“As such, it is going to be interesting to see how things will play out in the next GE, because no one can say with a high degree of certainty who is the PM in waiting.” 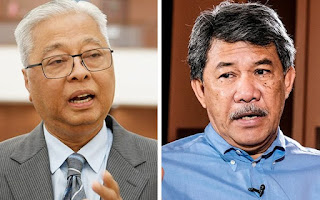 If words heard last week in the midst of the commotion on the rejection of the SOSMA motion in Parliament and UMNO Ministers breakfast meeting turns out to be true, a "fair deal" solution have been found.

During the assembly, Zahid already hinted that Ismail should remain PM for GE15. The UMNO presidency should then be decided in a party election after GE15 and is up for grab.

Assuming Mohd Hasan win Rembau Parliamentry seat with BN winning GE15 and he ran for UMNO Presidency, either the party will return to the tradition of PM being the UMNO President again.

On Associate Prof Azeem's view of Ismail, there is a point but given the situation, it is both premature and presumptous.

It was raised during Sunday tea that putting Mohd Hasan as PM from out of the blue is not prudent. Even for a brief moment, he need to go through the rope.

And there is the stigma of losing a small state like Negeri Sembilan to consider.

This reminded of a view to apply the corporate approach. It is suggested UMNO give each potential PM 3 years "contract" with a review to either renew or change. Both Ismail, 62 and Mohd Hasan, 65 are in their 60s.

This will be repeated till a truly capable and dynamic one found. By then, the current political practise is then resume.

It is out of the norm and not common practise, but what is ordinary these days?

In case any reader wondered why no mention of Dato Shafie Apdal, the latest words received is he is no more favoured by Mahathir to be nominated PM.

It came up in a phone call received while writing this posting. Another of the old man's condition is Pejuang will not be working with Anwar and PKR in any cooperation.

Despite Lim Guan Eng's expressed refusal to cooperate with PN, DAP's relationship with PKR has soured and apparently quiet keen to join the coalition of PPBM and Pejuang.

It means the new coalition's nominated PM is likely to be Muhyiddin.

Careful not to fall of your chair. Mahathir insisted the choice for Deputy PM be Dato Mukhriz Mahathir. It means Mahathir's youngest son is a potential PM in the making.

Apparently, a source claimed Mukhriz expressed his disappointment  with PKR and PPBM in a recent party meeting for considering Pejuang as insignificant and not to be taken seriously.

Mukhriz must be thinking Pejuang can match the size of both PKR and PPBM because despite Pejuang winning no seat in Johor, PKR and PPBM only won one and two seats, respectively.

It is not a surprise for Mukhriz to believe Pejuang should be respected as a major political party. He naturally believe Mahathir as Chairman is larger than the hundreds of thousand of members each of the two parties have.