Judicious in any personal attack at Permatang Pauh 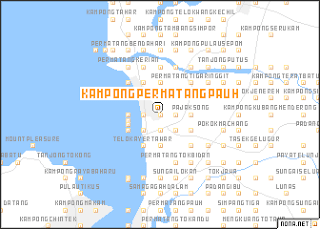 Dato Ahmad Shabery Cheek was doing relatively well in the oil hike debate given the fact he is up against a giant of a debater and a guru in rhetorics.

That was until he kept repeating the same line of character attack on Dato Seri Anwar Ibrahim and lost grasp of the debate.

That mistake should not be repeated in the Permatang Pauh by-election against Anwar.

Anwar's character issues is already taken and just need a bit of nudge to carry its own momentum. Any more personal attack could backfire.

Character come and go, leaders come and go too. Even if UMNO were to lose, it is timely for UMNO to move the political discussion and campaign from personality to real issues.

The response comments in Rocky Bru's recent posting, "Will Anwar sell us all out?" indicate that attack on Anwar's affiliations with Neo-Con America and its Allies seemed to run its course.

The mainstream media (MSM) and portals and blogs of UMNO, (could conveniently browse from a newly established blog-aggregator, Penggabung Suara ...) seemed inclinated to do a character attack on Anwar.

His sodomy case will conveniently be used. However, much has been talked about and talking further will only backfire.

Lets heed this warning from the Merdeka Centre recently released survey. Although there are those that doubt it's fairness, all surveys are for indication and seldom survey results reflect truly the final actual outcome. Not to mention, there is the possibility of some tampering and pandering to the paymaster.

Be that as it may, ignoring it will come with its own peril. 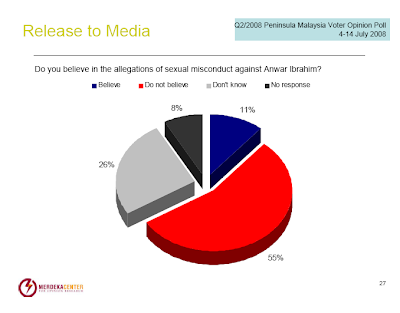 Lets refer to chart above on public opinion of Anwar's alleged second sodomy charge. Take note that 55% do not believe, 11% believe and the balance 34% are undecided.

The other survey finding (refer to Rocky Bru's posting here) indicate that the popularity of Prime Minister Dato Seri Abdullah Ahmad Badawi is at an unprecedented historic low and plunged from pre-GE number of 63% to 28%.

At 63% prior to the GE, UMNO and BN lost 5 + 1 states. Back in 1999 Reformasi, Dr Mahathir's popularity was taken aback but stabilised at 70-80%. That year the Opposition made a significnat inroad into Parliament and Terengganu fell to PAS.

During the March GE, places Abdullah visit to campaign fell, except for Jerlun. It would not be presumptous to asssume that the presence of Abdullah at Permatang Pauh by-election would effectively give the seat to Anwar on a silver platter.

Mention oil hike and associate it with Abdullah, even if Sheikh Qardawi run for UMNO and Anwar gave his scholarly respect, UMNO would still lose.

If character attack is no go and Abdullah Badawi please don't go, what is the option left?

There are a lot of factors to be considered before strategy options can be derived.

Over the years, Anwar has built a major weakness of inconsistncy from his political metamorphosis from an Islamist to a Nationalist and now a multicultural pluralist liberal. Blogger Sinatra_Z comment in Rocky Bru's here described well this aspect of Anwar, reproduced below:

This is my point of view and yes though it may seem insignificant, especially among rabid die hard fans of Anwar Ibrahim, this is what I have to say about him.

I don't really care if he screws someone in the arse, I don't know if it's true or not and unlike most of you I do not make conclusions before the case is heard in court.

He has no clear stand, populist stance and unclear principal. In 1970's he was all about the poor people a somewhat right wing socialist. Then he became an sort of islamist during his early Abim years.

Then he change into a champion of the modern Islamic Malay who wants to stitch the name of Mahathir and Siti Hasmah in the sky using the threads of cloud in the years of UMNO.

Then when he got kicked out suddenly he was against dictatorship and evil pharaoh called mahathir and now suddenly with all those islamic and malay agenda flushed down the drain he is on the road of becoming an open liberal secular Malaysian for all. No longer you hear he talk about islamic nation or anything.

But wait, just listen to him when he speaks to a bunch of PAS supporters.

Now think about it, Who critise badawi the most Mahathir or Anwar Ibrahim? Mahathir hits on the incompetent prime minister for his lousy decisions in economics and policy. Anwar Ibrahim hits at the most competent Minister in the cabinet over a dead mongolian girl with rumours he heard from the Internet.

That thing he said about IPP in the televised debate,ever heard he talk about it in ceramah before the elections? You wan't to know why he never said about it, it's because the IPP issue was something that Jeff Ooi raised in his blog. Anwar Was talking about how Oil is the people's right and that we should give it at cost price to the people.

Yes Indeed Anwar Ibrahim is a Good Politician call him brilliant if you want but guess what, THATS IT! JUST A POLITICIAN.

He is all politician and nothing else. Lets put the voters to ponder Anwar's track record as Minister. He has no contribution of significance.

Anwar should be reminded to the voters for his association to introduce IMF solution template for the 1998/9 financial crisis. The basis and justification to his current economic agenda is still IMF template and lack any substantive nation building agenda.

Other than the mess in managing the financial affair of the nation, lets not forget the confusing introduction of Bahasa Baku and the mess he brought into the Ministry of Education for turning it into his political machinery.

The challenge would be to translate all these for teh disgestion of the common people.

What should UMNO do?

Now that it is established that character attack is no go, Abdullah don't go, and explore where Anwar go in the past (not to mean of some kondo or rented rooms at Saujana), how should UMNO go about with its campaigning?

This is the part that is left best to the ground political tactician and seasoned campaigners. The finer points is best not be discussed openly.

For one, Najib did well to be humble in his comments of UMNO's chances. An underdog UMNO with a good and united election machinery is a powerful opponent. Thus, can't understand why Mat Taib and Ali Rustam is worried and was saying not to think UMNO has no chance.

Do not take for granted the "saluran tiga and empat" and women. They require a special touch for their view and interest differ from the adult, male and Malay voters. Campaigners able to relate to them and with the right deft touch is needed to woe their heart.

Permatang Pauh has a sentimental attachment for Anwar. Even in 2006, one UMNO branch from a flats area proposed the reinstatement of Anwar into UMNO.

Anwar is a great orator able to captivate and woe people by the thousands. UMNO will have to rely on the strength of its machinery and ability to reach at an individual level.

It is at the individual level conversation and campaigning that Anwar's personal issues can be selectively and judiciously introduced.

The question now is what message and hope does UMNO have to offer to the people of Permatang Pauh. Thats a tough one given many recent developments on Malay interest.

One can expect Anwar's ready made reply that UMNO is no more championing Malay interest.

It doesn't help that Nazri announced in Parliament for the reduction of Malay scholarship from 80% to 55% without increasing the scholarship allocation.

The saving grace is Dato Khalid Ibrahim's statement seeking 10% quota for non-Malay into UiTM. If one can guess Anwar's response, he would say that he believe in Article 152 and 153 with his diversion or caveat that there is no corruptions, cronyism and inefficiencies.

That's political rhetoric. The answer for UMNO is simple. If only Abdullah quit before nomination ...

now u have made me really thinking about permatang pauh.

especially the last line u got there.

we know everything about anwar and his long hold strength, and how good he is politician. and we also know that barisan has no credible option to field against anwar.

in fact, i now know only 2 outside influence that can turn permatang pauh upside down.

1) u said it first - abdullah letting go his premiership days before penamaan calon.

2) bring back good old mahathir to campaign for the opposing candidate to anwar.

In my last night late night chat or precisely morning, one friend commented that if Dr M is still PM, this situation will not happen.

To get Tun to speak, siapa dari UMNO nak jumpa untuk mintak dia. You think Pak Lah would seek from him?