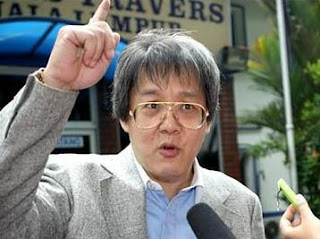 There was much talk today (Monday) on the blogosphere of Matthias Chang's remark of losing hope with PM Najib.

When I finally was able to read Matthias's article here, it was about the differences in statements between MoF II, BNM Governor, DG of EPU, and the PM on the state of the economy.

It figures. They were playing up an issue for a repeat of 2006. If the Johor Bridge cancellation broke the camel's back then, Najib's expressed willingness to build the third bridge instead of the planned bridge should have.

But I wonder why they did not play up Matthias article on the equally directionless Pakatan Rakyat state government two weeks earlier.

Will the camel eventually broke it's back? I only can say not this time. It's not because there is personal preference or pilih kasih for Najib over Abdullah. For the time being, I will shut my big mouth for fear of preceeding anything.

It could be a serious matter when different Government officials express different views and at times, conflicting views. It confuses the public and business community. When confused, they do nothing. Thats not good for the economy.

But such differences is not unusual at major financial centres abroad. To play it down, one could use the excuse that it is a new openness and liberal expression of economic view.

Matthias Chang's frustation with Najib is understandable. He has been blasting Tun Abdullah for a long period of time out of his concern on the direction and management of the local economy.

His concern came out of his strong conviction that the global economy is heading for a meltdown. Many was sceptical and critical of him then, but now they should be "eating their shorts".

Matthias had given much hope and expected Dato Seri Najib to take charge and immediately undertake drastic actions to address the economy. But, Najib couldn't seem to cut short the bureaucrasy in process.

And, Matthias's patience maybe failing him further when Najib appointed Tan Sri Amirsham Aziz as NEAC Chairman, a person he described as "do not inspire confidence when this banker was responsible for the acquisition of an Indonesian bank which turned out to be a multi-billion ringgit scandal!"

Omar Ong, Syed Hamid and Amirsham is only the tip of the iceberg. The grapevine is buzzing with many upcoming new appointments of names that failed in their "assignment" and of questionable integrity and trustworthiness.

GLC under Amukh (Azman Mokhtar)'s leadership at Khazanah had in place KPIs. He has been promoting and presenting it at endless seminars of his GLC Transformation Plan and KPIs that he gained Najib's confidence to develop the Ministers' KPIs.

I do not wish to keep questioning loudly any more new appointments of the PM and DPM. The last I want is to be assigned the Cabinet's head hunter. But why are low KPIs renewed contracts and getting promotions? The last Najib would want to happen is for people and market to run amuck from lost in confidence.

However, Matthias is not one-sided in his criticism. In fact, that is similar with yours truly's stand. He questioned the Anwar-led Pakatan Rakyat's state governments, who he described as equally directionless in addressing up to the problems from the global economic meltdown.

This the opposition centered blogosphere conveniently failed to give him the attention. Matthias made those in his posting dated May 19th, 2009, which is 11 days before his much publicised posting today.

I share with him the issues raised. The article is reproduced below:

We Demand In No Uncertain Terms A Report Card From Leaders Of The Pakatan Rakyat - What Have You To Show To The Citizens of Kelantan, Kedah, Penang, Perak and Selangor After One Year In Power?

We, at Future Fast-Forward have been very critical of the Barisan Nasional government and we make no apologies for our biting criticisms.

We do so because as the Federal Government, you set the standards by which others are judged. Should you fall below our legitimate expectations, it is inevitable that your failures will snowball and overwhelm the rest of the body politic.

This is an awesome responsibility.

You stepped on the plate and asked us to elect you to lead the nation, thereby asking us to put our faith in your leadership. The electorate has re-elected you to manage the country in accordance with the highest standards so that we may hold our heads high and be proud to be Malaysians.

However, we do not believe that our role is merely to criticise and not to demonstrate our appreciation when correct policies are being implemented.

We therefore applaud the Prime Minister and the leaders of the Barisan Nasional for heeding the sentiments of the rakyat in not falling into the trap of the political mischief-maker, Anwar Ibrahim by contesting the Penanti By-elections.

For too long, over a year after the General Elections in March 2008, we have witnessed gutter politics practiced by Anwar and his fascist band of bloggers and the incredible stupidity of the Barisan Nasional reacting to each and every provocation.

It is a welcome change of strategy that the Barisan Nasional has finally found the wisdom in rejecting the taunts and provocations of Anwar Ibrahim and his spin doctors.

For over a year, the focus was on the Barisan Nasional. They only have themselves to blame for being in the tight spot.

Pakatan Rakyat and Anwar Ibrahim got away with political murder and distracted the entire country from the urgent tasks at hand – to overcome the impact of the global financial crisis and lay a solid foundation to propel our country to achieve greater excellence in all fields of our national endeavour.

At long last, we can now focus on critical issues.

We have highlighted the various challenges in the financial and economic areas in numerous articles and we shall not repeat them here.

Every citizen who loves Malaysia must now make an objective analysis and evaluation of the two competing political forces – the Barisan Nasional and the Pakatan Rakyat.

Choice is important and before we make our choice, we must be level headed and examine every facet and angle of the policies and plans supposedly conceived and executed for the benefit of the rakyat by these political leaders.

If we make the wrong choice, we may plunge the country into chaos and at the minimum, ten to fifteen years of mediocrity, if not failure.

The Barisan Nasional has a report card of fifty years of governance.

In contrast, only PAS has some record of governance and then only in the state of Kelantan. DAP and Keadilan are novices and have yet to prove their mettle.

By all means, visit the blogs that are pro-opposition and that of their leaders, but please apply common sense when reading what they have to offer. They are all heavy on sound bites but what is most glaring:

is the total absence of coherent policies, practical measures and direction from the state governments which they are in control.

Notice also that these blogs do not tolerate any dissension from their perspective. They adopt a fascist mindset. Say anything contrary, and you will receive a heap of profanities. This is their standard operating procedure, one designed to intimidate and discourage rational debate.

If a man, whose only reputation is that of taking some photos allegedly of Dato Lingam and who had no prior experience in politics and or public administration, was recruited by Anwar’s PKR to contest in the General Elections, how can such a person contribute effectively to developing our country? The rest of Anwar’s political entourage is no better and does not inspire confidence.

Hence, Anwar’s diversionary tactics and distractions. Anwar is a master in manufacturing “political noise”, massive amount of noise to cover up his inadequacies and to prevent people from asking the right questions and focusing on critical issues.

We are now issuing a public challenge to Anwar and the leaders of the PR state governments.

Give us a report card on your achievements after one year in power!

Give us your blueprint for the states under your control, specifically your policies in ensuring the continued wellbeing of the rakyat suffering from the impact of the global financial tsunami.

Give us your strategies in making Malaysia the most dynamic country in ASEAN.

Give us specifics, not spin, in achieving a higher degree of national unity, as this is always a work-in-progress.

If Anwar, Hadi, and Lim Kit Siang fail to respond within 48 hours from the date hereof, as it is their duty to do so, they must be exposed for what they are – political charlatans.

Finally, Anwar, I dare you to debate with me in public on the above issues. Let this be a No Holds Barred debate.

The rules are simple.

We speak for half an hour.

We cross-examine each other without mercy for another half hour.

We let the rakyat decide the winner of the debate.

Bravo, Matthias! I'd love to see him take on Anwar! C'mon Anwar...let's see what you're made of!

Personally, I have no choice but to agree with Mathias. The benchmark set by Tun Lah is very low and yet DSN still managed to disappoint. Some decisions he made baffled me as a Malaysian Malay and I began to wonder why he made those decisions. What do you think, Voice? From Petronas, to the bridge, to IDR, to those silly appointment; I have this nagging feeling that given a choice, he will not make those decisions. Scary thought but when Mathias speaks, its a real warning that the camel's back is about to break.

Agendadaily can organize a debate between Anwar and the no-nonsense Matthias. He is a learned man and both are firepowered politicians. It will be great to see such a debate.

I am half trough reading "Mao: The Untold Story" by Jung Chang and Jon Halliday, first published in 2005. Partially reading the book, I saw some parallelism in Mao and Anwar character during current political and economic situation in Malaysia. He wasn't involved in fighting the economic battle but trying to sabotage it...his aim is to hijacked credit afterward.

Was watching dr zhivago last nite. Part of how bolshevik brought down d czar was to sabotage to make russia lost a war.

I know what you mean.

Can you substantiate with any proof or analysis?

Otherwise it is speculative.

Matthis sort of challenge is nonsense!

Who are you to challenge DSAI.

What if i, sunwayopal challenge Najis Razak to a half hour no holds barred debate on Altantuya.

And he has 48 hours to respond failing which he will be deemed guilty!!

Does this sort of 'Matthias like challenge" make any cow sense?

Dr M will not Criticize Najib...

How Can He?
He literally permanently zipped his lips when he claimed that Najib was his first choice instead of Abdullah Badawi and that Abdullah was only caretaker...

Thats too simplistic and presumptous.

I won't be talking.

It was in 1969 when our Bapa Malaysia Tunku Abdul Rahman Putra was "Betrayed" by his Deputy (with the Elite Ultra Group) thereafter, the system of Wesminster style Democracy & with the Rule of Law respecting our National & State Constitution was "Hijacked" & turned into the "Ketuanan UMNO Ideology".

In 2009 we are witnessing that "Ketuanan UMNO Ideology" going "Horribly Wrong" with Denials, Intimidations, Threats, etc convoluting it into "Gutter Politics & Law of the Jungle".

The PRESENT LEADERS on BOTH sides of the Political Divide are "Trapped" in their "OWN QUAGMIRE" with no Win-Win SOLUTIONS....

Until such times Malaysia can IDENTIFY “Role Model” MATURED, EDUCATED, INTELLIGENT, ESTABLISHED Leaders & Politicians of HONOUR with Calibre & Tolerance without Fear or Favour,

Malaysia CANNOT even THINK of having a 2 or 3 PARTY Political System of Government to mitigate the IMPENDING Political & Financial fallout.