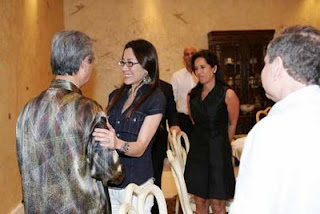 Back on September 4, 2008, yes 12 days before Anwar's ascend to premiership, I wrote a piece entitled Whats Michelle Yeoh got to do with Tourism DG, Mirza's dental corruption?

It was during the last days of Pak Lah's administration. He was trying hard to erase the perception of corruption and hopefully to save his premiership.

There were several people charged including the former Director General for Tourism Malaysia, Dato Mirza Mohammad Taiyab. His was the ridiculous corruption charge for dental service costing about RMRM13,860.00.

My source said something similar happen. It was to catch the small fish in order to let the big fish go. Just go back to the link for the story to know who was the suspected big fishes.

However, the latest development have made the story not as it was written. Instead of Michelle Yeoh, it was Jean Todt that was appointed Tourism Ambassador. The annual multimillion package turn out to be about RM1 million a year.

In the meanwhile, the latest heard is the prosecution had changed their charges. It came just about the time when Mirza was to submit his defense affidavit.

If it had been Anwar Ibrahim, there would have been a big fuss. But there was none for Mirza. I guess we can assume that usually the apolitical civil servant Mirza had not jumped over to PKR side.

The latest revelation had PKR's hand in it. It is Azmin that raised the issue in Parliament yesterday.

In an interesting note, a commentator pointed out in the blog Barking Magpie that the dentist and prosecutor witness, Dr Kamsiah is now married to Din Merican, one of Anwar's "strategist" in his office. They had just celebrated her Birthday here.

Din confirmed he is back to blissful marriage life. An overdue belated Selamat Pengantin Baru and congratulations.

MP for Gombak Azmin Ali has asked the government to explain why it spent nearly a million ringgit to hire former Ferrari Formula One owner Jean Todt and his fiance Malaysian actress Michelle Yeoh as tourism ambassadors for the country when there were already tourism offices in major European cities.

According to the PKR vice president, Todt’s annual fees amounted to RM593,400 while the couple received RM388,000 for holidays in Malaysia. Their flights alone cost up to RM360,000.

“This is only the flight costs. It does not include overseas accommodation, traveling expenses and lifestyle allowance,” Azmin later told reporters at the sidelines of Parliament.

During the sitting, Deputy Tourism Minister Sulaiman Abdul Rahman Taib had refused to answer Azmin’s question, saying it was unrelated to the original question which was on the types of films and documentaries produced to promote tourism.

Did the gov’t offer him land? Was it for free?

Azmin also demanded to know if the government had offered land to Todt , who allegedly is building a home in Pulau Besar near Kuala Terengganu.

“I have proof on the offer of land to Todt in Pulau Besar. I have documents to show that there has been communication between the ministry and Jean Todt on the matter,” said Azmin.

“But I’m not going beyond that until the ministry comes out with an open statement on the matter. Was the land given for free? They have to come clean. What is the premium paid by Jean Todt? What is the acreage given to him?”

Tourism Minister Ng Yen Yen later confirmed that Todt was appointed as tourism ambassador for a two-year period beginning May this year. According to her, Todt’s “presence in Europe will increase Malaysia visibility”.

She also claimed that the RM1 million allocated for the tenure of his appointment has yet to be spent.

“The money is not in the form of cash to him. To promote Malaysia in Europe, RM1 million is nothing,” Yen Yen said.

The sum is for a two-year budget that has been set aside for Todt, who was appointed ambassador for Tourism Malaysia in May.

“The RM1 million allocated to him is not cash to him,” said Ng. “It is given when he travels, and whenever he meets people.

So this is a two-year budget set aside for him.

“We need him to go and promote the country. When you want to go on a promotion in Europe, RM1 million gets you nothing. So yes, he has been allocated the money, but not in his pocket. It is in the ministry,” she said during a press conference at the parliament lobby on June 24.

Ng said Todt’s presence and connectivity in Europe and around the world would be able to bring more visibility to Malaysia.

“We also want him to promote the Malaysia My Second Home programme,” she said. Tourism Malaysia would spend accordingly and would be transparent and accountable, said Ng. The money would be used on air tickets and meetings.

Ng said that Tourism Malaysia had yet to spend the allocation for Todt.

“This budget is not for his pocket. This budget is for expenses incurred when he needs to go (and) meet people such as top media people or top television people,” she said, adding that Todt also arranged for her to meet top film producers while she was in Paris.

She said the appointments would not have been possible without his help.

Ng also dismissed Azmin’s allegation that Todt and his fiancee Datuk Michelle Yeoh were offered a piece of land in Pulau Besar, Terengganu.

Earlier, Azmin had raised the question in the House during the question and answer session but Deputy Tourism Minister Datuk Sulaiman Taib Mahmud had refused to answer as it was not related to the original question.

Maybe it is a good idea or maybe not. But be aware that the F1 seemed to be splitting up.

a voice
why would azmin said he has the document and not shown it to the world?
PKR people always showed the world any documents even a false one, but why just said it they have the documents?

Its a mad mad world;

1> a foreigner and not an especially significant person gets RM 1 million play money.What would the govt pay for Shahrukh Khan?A little grant of 100k to do a tourism website is too much money and NO budget
2> a privately owned airline owes RM 65 m...which is actually monies already paid for by joe public/passengers...and govt needs a consultant to resolve?I owe a GLC 1k for electricity and i will get my supply cut off?
3> our national oil company to have another accountant as head..from pilgrims,palm oil to crude oil?The world big four oil Co are headed by technical guys with years of experience in the industry???Thus,we are smart..can run oilcos,airlines,etc WITHOUT experience BUT..my son gets rejected for a junior job COS no experience??

Why this obsession with a white man who is already super rich as ex head of Ferrari?

Could we not have asked Michelle Yeoh to take the job voluntarily?

And how many zillions has he brought in as FDI's here?

Azmin sholud also check and compare his contribution to the country to those of Michelle's and Jean's.

And he should check his own lifestyle allowance when he was living jet-set as a young private secretary to a former Finance Minister.
Sish, donno why Malaysian people kept on falling for politician's crap.
better talk about other thing than those of this bloody hypocrites.
I'll say it again here, all politicians are bloody nincompoop.
And all those manning government coffers, the setiausaha, the jkr, the pengarah agensi etc, all are bloody thiefs.
Babi hutan lahanat semuanya.