Shieh of Kickdefella finally posted a response. He ask if it is a rejection of Nik Aiz and Kelantan PAS?

Husam reject his man's claim in Malaysiakini here earlier. He is being a gentlemen or politically correct but it does not hide the fact that Kelantan PAS did badly.

Hey friend, you sound like sulking. Take it easy. Wrap up and have a good sleep. Jaga your heart.

Hantu Laut here felt Husam's demand for the Prime Ministership to PAS sent shivers through Anwar's bad back. They are talking of being alternative of UMNO. PAS Youth demanded NEP to stay, setting aside Anwar's call, and invited response from MCA Youth.

Unker Kit very confused here, you know. But why the less than enthusiastic response? 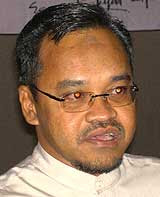 Malaysiakini reported Nasharuddin reiterating his message that the president did not reject any attempt to engage with other political parties and NGOs. He clarified engagement with UMNO does not mean cooperation. Read here.

Syed Akbar of OutSyed The Box is churning in his stomach with confusion. Which way folks? Read here.

Husam rejected UMNO after the General Election 2008 result. Why did delegates rejected him? There are those who believed he could win in a straight fight. Read here. Nevertheless, why? 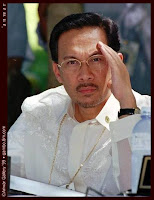 Predicted by Garamanis here and hinted by Penarik Beca here.

Voice,
Shukran, shukran PAS is saved from the tides of secularism.

My few words for Sheih, obey your master coz Husam pays your bread and butter.
But please do not put your obedience above the obedience to Allah.
And I guess Putra Merdeka has a point, when exactly you and your master are joining PKR since you both are carrying Anwar's agenda.

Padan muka Sheih (Kickedefella). He did an overkill for his boss resulting in Husam's loss. At least now PAS is free from Anwar's clutches and the delegates are wise enough to see to that.

In strtegic terms, I think Anwar will not let Husam do that. Anwar need Husam Erdogan in PAS in order to exert influence on Nik Aziz.

It is reported in Malaysiakini that even though Datuk Husam lost, there are many young Erdogans who won the Committee election.

Erdogan camp are among the top leadership of PAS. Since the Erdogans and Ulama leaders share the power in PAS, I cannot stop myself wondering whether this "machine" has two pilots or not.

Are the Erdogans in PAS working to push the party forward as a dominant force in Malaysia ?

Or are the new faces in PAS there to limit the party and complement the draft of Pakatan to make Anwar Ibrahim the Prime Minister of Malaysia if the coalition wins ?

Will PAS still enjoy the support of Pakatan followers if they turn out as the dominant party in Pakatan Rakyat instead of Anwar, PKR or DAP ?

Will Anwar Ibrahim and DAP's top guns give their unconditional support to PAS President and Deputy President as the new Malaysian leaders ?

Will PAS get the lion's share in seat allocations or will they be treated as a third ranked coalition partner in the coming 13th General Election ?

The fundamental question with precision is of course nothing but the ideologies and the party direction.

Is PAS still moving forward with their "negara Islam" agenda (which I personally think we already are) or are they changing course?

If Malaysians have good memory, the major partner in Pakatan (DAP) which share the same bed as PAS is totally against Malaysia as an Islamic State.

Anwar must be having sleepless nights.

At least he has the guts to Contest! Not like BN at Penanti....

Remember Amanat Hj Hadi? Does this unity government overwrites that amanat when UMNO members are kafirun? But more so, when did DAP not kafir? Anwar and gang by virtue of leaving UMNO are now pure?