PAS or PKR will make the move to BN? 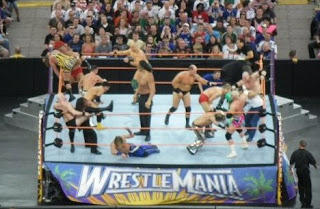 To the common citizen, the Malaysian political facade looks like a tag team wrestling match up between BN aganst PR. But in actual sense, it is not. The minute intricacies are hidden beyond their eye sight and knowledge.

It is more a cage wrestling brawl with every wrestler for themselves. In one moment, one wrestler may tag with another wrestler to bash up a really superior contender. Within minutes, they would be at each other's throat. The strongest will come out the winner.

PAS Muktamar have just been completed. Their vocal expression of opinions and democratic practices is commendable, unlike UMNO's more subdued discussion in it's General Assembly. The question now is where will PAS relation within Pakatan Rakyat and vis-a-vis UMNO be heading to?

Without having to repeat the analysis of other political observers and analysts, the question could be moved forward to who will pursue their own interest and grab the throat of their fellow tagteam? The winner will be the one moving first to UMNO/BN?

Many liberal Malaysians would like to believe that PAS have moved away from their cleric-centred stance to a more liberal stance. This is to be in tune with the expectations of the non-Malays expressed in the rhetorics of PKR and DAP.

They would like to believe that UMNO is ready to sing Sinatra's My Way. "And now the end is near, as I draw the final curtain ..." But is it that simple?

PAS Muktamar was an awake call on the party as to not divert away from their original and historical disposition.

They were reminded not to be so obsessed with the road to Putrajaya that they set aside the Islamic causes. A reflection of that there was a call to ban Sister-in-Islam.

The Pemuda PAS made an economic preposition to caution against liberalism and seek for extension of NEP. This is in contrary with the position of DAP and PKR.

When Hadi expressed in his speech for a Unity Government, it received the mainstream media attention. Presently, the enthusiasm within the rank is mixed and there is a dissenting faction. Politicians are realistic people and reality will eventually sink in.

To understand this, all one need is to read the charts below taken from Shieh's over confident posting entitled Road to Putrajaya. It shows the predominance of Malay and Islam in the population breakdown in this country. 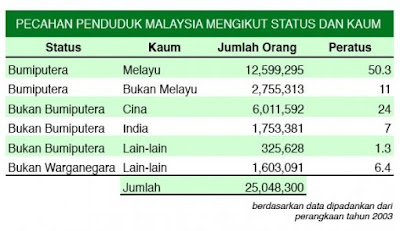 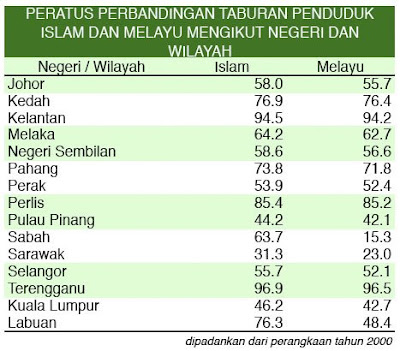 PAS, at least a certain faction, realised they will not politically survive by alienating the Malays. The Bukit Gantang by-election is indicative. They learned that sooner or later, the Perak debacle will not put PAS in the right light in the eyes of their traditional voters.

They are those that could not stomach the liberal stance on inter religous issues, which has caused UMNO to concede on the family conversion matter.

Many would be thinking that it could eventually lead to PAS returning back to Barisan Nasional. But will it be PAS or PKR going to BN? For sure, it will be either but not both to return to UMNO/BN.

It is a practically taken fact that Anwar is not a member of PKR and harbours the ambition of returning to UMNO. It would not be a surprise if the ex-PKRs who returned to UMNO are openning the path for Anwar's return. Their repeated call of struggle is Malay unity.

Logically, PKR have more similarity to BN than PAS. It is a hodgepodge of conflicting political ideologies and racial interest co-existing uncomfortably.

Believe what one wish to believe, but deep inside the Malay PKR members are still the Malay psyche. They are not real believers of multiculturalism and multipluralism but merely following their bosses and warlords into PKR.

If only have access to the confessions of the two PKR members that jump over to Independent and supported BN in Perak, the issues they raised remain within the plight and sensitivities of the Malays. Until socio-economic disparities between the races disappear, those liberal ideas will only face the wall.

Only DAP would like to believe what they want. But they are merely spewing sugar coated ideals but hiding their racial self interest too.

Thus, for Pakatan Rakyat to survive, they could not be living in denial. Like it or not, they have to replicate, if not improve the BN formula. They must position themselves as an alternative to BN in a two party system. Read Aspan Alias here for his interesting view on two-party system.

One will expect Lim Kit Siang and Karpal Singh to be screaming, "Over my dead body!" But failure to acknowledge that socio-economic demography will only hasten the breakup of Pakatan Rakyat. It is a matter of who between PKR or PAS will be leaving for BN.

On Husam's loss, it is not because of his anti-UMNO and pro-Anwar stance. He lost due to overzealous campaigning and his hypocritical position on UMNO. Prior to GE12, he was regularly in discussion with UMNO, but change for Anwar after GE12.

Pas is just so desperate now coz they know that by end of July, Anwar will be proven guilty, not just by the court, but the rakyat, base on the strong evidences that will be reveal.

I presume Hj Hadi n his man knows what r the evidences. Haha