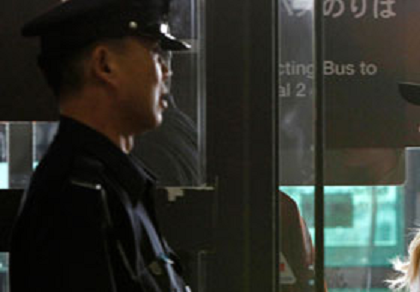 Japanese immigration barred entry to Malaysia's opposition leader, Dato Seri Anwar Ibrahim at the Tokyo Kansai Airport this morning and had him return back to Kuala Lumpur immediately.

As one backed by the American, he would not have expected a strong American allies like Japan to refuse him entry. Naturally, the American blueboy is fuming mad and one would expect him to blame others but himself.

Below is an image of Anwar's social media posting trying to explain his version of the incidence before it is publicly known and give rise to speculation that will tarnish his reputation: 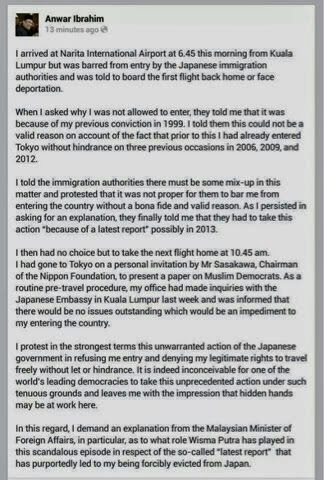 He is being denied entry by the Japanese authority but why must Foreign Minister Dato Anifah Aman owe him an explaination ?

Does he have a diplomatic passport to provide him immunity from any offense made in the past to disallow him entry? 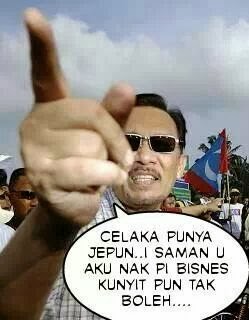 We were with friends when the news broke to us. One friend speculated that he may have wrongly filled the entry form to state the purpose of entry as "liwat" instead of "lawat". Off course, he was kidding.

Taken that it does not make sense to deny him entry for the 1999 conviction now. Since his release after serving time for the offense of  abusing his power, he has entered Japan on three occasions since.

So what is the thing Anwar described as "because of the latest report" possibbly in 2013?

He was acquited from the sodomy charges and will only face the appeal this year. Recently, he ws acquited also from the charge for participating in the illegal assembly Bersih 2.0. It is not likely for any offenses in Malaysia.

So ... what did he do when he last entered Japan in 2012? The Japanese should know better about what happened.Will Anwar own up to his own misdeed?

No ... it is most unlikely to ever happen. 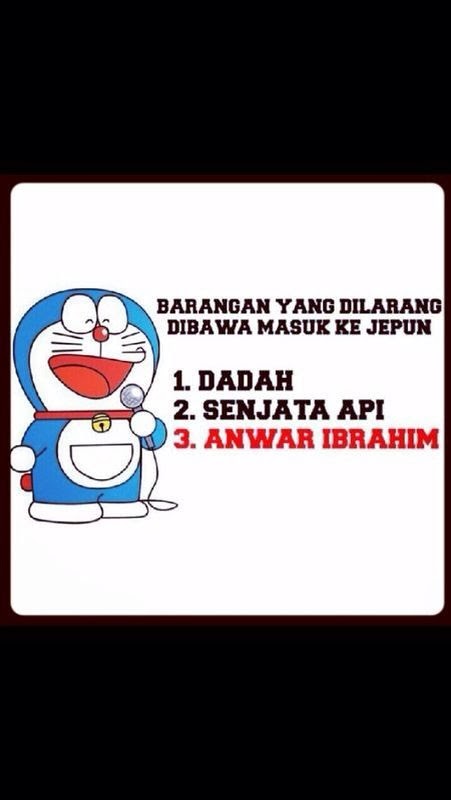 Few calls made to few people working with people in high places revealed that Anwar does not have a diplomatic passport. It means he subjected to Japanese Immigration rule.

Dr Novandri did some homework and highlighted in his blog here that Anwar was denied entry under Article 24 of the Japanese Immigration act as below:


Article 24 Any alien who falls under any of the following items may be deported from Japan in accordance with the procedures provided for in the following Chapter.


(i) A person who has entered Japan in violation of the provisions of Article 3.

(ii) A person who has landed in Japan without obtaining permission for landing from an immigration inspector.

(ii)-2 A person whose status of residence has been revoked pursuant to the provisions of Article 22-4, paragraph (1) (limited to those pertaining to item (i) or item (ii)).

(iii)-3 A person whose entry into Japan shall be prevented pursuant to an international agreement.

(a) A person who is clearly found to be engaged solely in activities related to the management of business involving income or activities for which he/she receives reward in violation of the provisions of Article 19, paragraph (1) (except for those under the control of another due to trafficking in persons).

(b) A person who has stayed in Japan beyond the period of stay authorized without obtaining an extension or change thereof.
(c) A person who has committed trafficking in persons or incited or aided another to commit it.

(f) A person who has been sentenced to imprisonment or a heavier punishment for violation of the provisions of laws and regulations relating to alien registration, except for those who have been found guilty with suspension of execution of sentence.

(g) A person who is a juvenile provided for by the Juvenile Act (Act No. 168 of 1948) and who has been sentenced on or after November 1, 1951, to imprisonment with or without work for not less than 3 years.

(i) In addition to those persons listed in sub-items (d) to (h), a person who has been sentenced on or after November 1, 1951, to imprisonment with work or imprisonment for life or for a period of not less than 1 year. However, this shall not apply to those who have been found guilty with suspension of execution of sentence.

(j) A person who engages or has engaged in prostitution, or intermediation or solicitation of prostitutes for others, or provision of a place for prostitution, or any other business directly connected to prostitution (except for those under the control of another due to trafficking in persons).

(k) A person who has stirred up, incited, or aided the illegal entry or illegal landing of another alien into Japan.

(m) A person who organizes, or is a member of, or is closely affiliated with any of the following political parties or other organizations:

1. A political party or organization which encourages acts of violence or the assault, killing, or injury of officials of the Government or local public entities for the reason of their being such officials.

2. A political party or organization, which encourages illegal damage or destruction of public installations or facilities.

3. A political party or organization, which encourages acts of dispute such as stopping or preventing the normal maintenance or operation of security facilities of a plant or a place of work.

(n) A person who has prepared, distributed or exhibited printed matters, motion pictures, or any other documents or drawings to attain the objectives of any political party or organization as prescribed in sub-item (1) or (m).

(o) In addition to those persons listed in sub-items (a) to (n), a person who, the Minister of Justice determines, has committed acts detrimental to the interests or public security of Japan.

(iv)-2 A person who is staying in Japan with a status of residence listed in the left-hand column of Appended Table I and has been sentenced to imprisonment with or without work on the charge of a crime provided for in Part II, Chapter XII, XVI to XIX, XXIII, XXVI, XXVII, XXXI, XXXIII, XXXVI, XXXVII or XXXIX of the Penal Code of Japan, or in Article 1, 1-2 or 1-3 (except for the parts pertaining to Article 222 or 261 of the Penal Code of Japan) of the Act on Punishment of Physical Violence and Others, or in the Act for Prevention and Disposition of Robbery, Theft, and Other Related Matters or Article 15 or 16 of the Act on Prohibition of Possession of Special Picking Tools, and Other Related Matters.

(iv)-3 A person whose status of residence is "Temporary Visitor", and has illegally killed, injured, assaulted or threatened a person, or damaged or destroyed a building or other objects in relation to the process or results of an international competition held in Japan or with the intent of preventing the smooth operation thereof, at the venue of the international competition or within the area of the municipality where the venue is to be located (this refers to "ward" where the Tokyo special wards exist or designated cities prescribed in Article 252-19, paragraph (1) of the Local Autonomy Act) or to neighboring places provided for use to unspecified persons or a number of persons.

(v) A person who has been granted permission for provisional landing and flees or fails to appear at a summons without justifiable reason in violation of the conditions imposed pursuant to the provisions of Article 13, paragraph (3).

(v)-2 A person who has been ordered to depart from Japan pursuant to the provisions of Article 10, paragraph (7) or (11), or Article 11, paragraph (6) but does not depart without delay.

(vi)-2 A person who has been designated a period for departure pursuant to the provisions of Article 16, paragraph (9), but does not return to his/her vessel or depart from Japan within that period

(viii) A person who has been given a departure order pursuant to the provisions of Article 55-3, paragraph (1), but stays in Japan beyond the time limit for departure pertaining to the departure order.

(ix) A person whose departure order has been revoked pursuant to the provisions of Article 55-6.

Naturally some will say he is being denied for his sexual inclination but that was 1999. 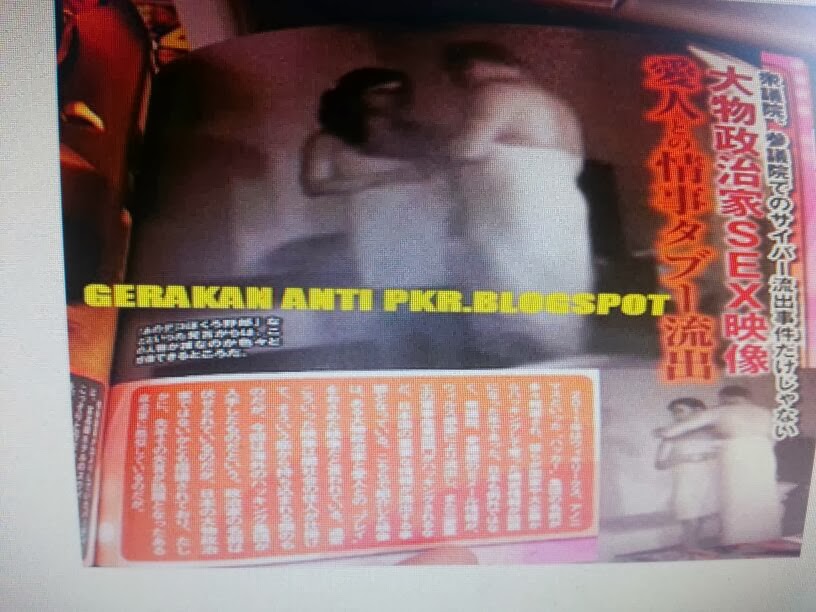 Perhaps a 2004 Competition Act refused him to protect the local pornography industry. The Japanese are very efficient that they have machines to detect offenders and immediately would sent them back: 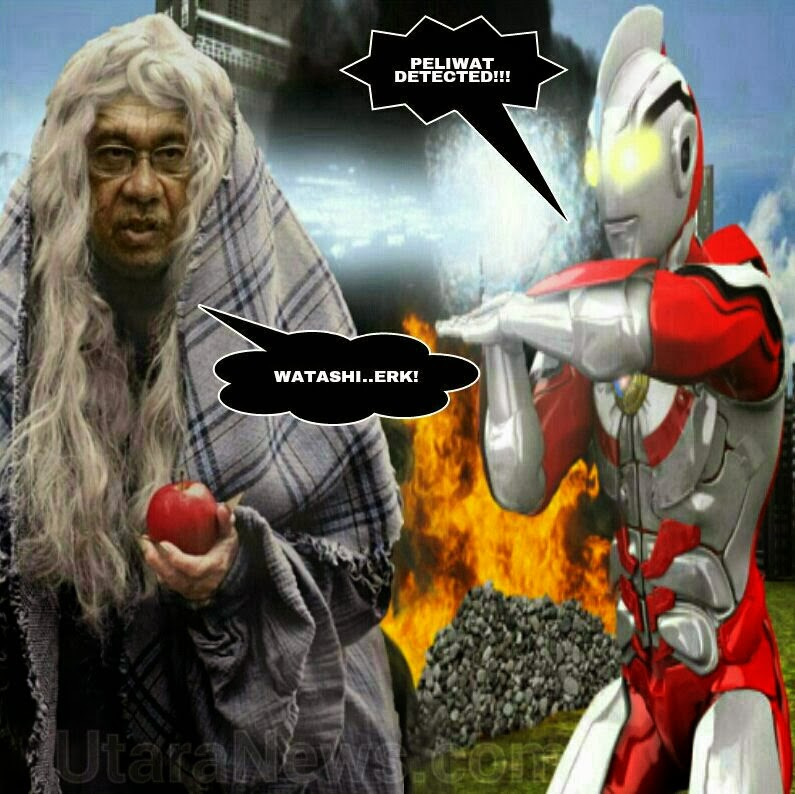 A bloke send an SMS to us to share his theory:

Gobala Krishnan used to make such allegation and that theory have been bandied around that it had become an urban legend almost like the story of Marcos gold. 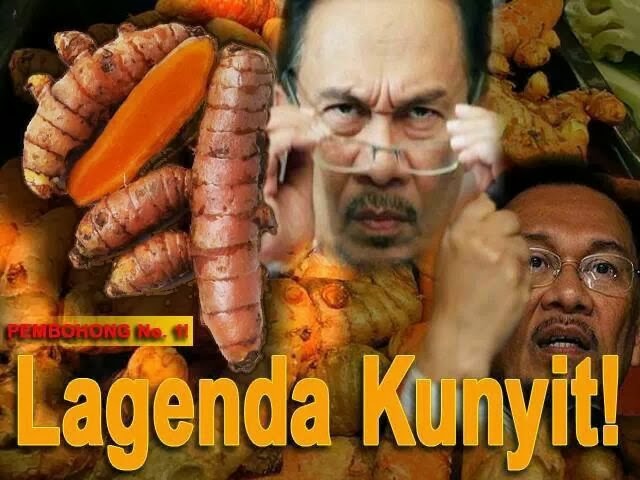 China is on the Way Up and Japan is on the Way Down!
This will just help China to Forge a Closer Relationship with Malaysia when the Opposition Comes into Power!

This is only the beginning for the Anwar saga around the world. Have you heard of the domino effect that may eventually befall our friend Anwar bin Ibrahim, Ibrahim bin.......???. Tunggu dan lihat. God says He only is the witness to all our good and bad deeds. Believe it or not, just read on what others have to say about this man, who may have nine(9) lives, but not too colourful either though!

only the passport bearer can only answer the matters himself..

He knows it better than us just as the Japanese Authority...

Blaming Wisma Putra and not his office is making himself like a kangkung kangkang...

First thing has come to my mind, his image. Guys remember his blue film 'china doll' already spread all over Japan and the media also release the cover story. Second, Lahat Datu involvrment. However.... i don't think that was the main reason. It must be base on hard proof.. example, court case etc.

What is more criminal that to see UMNO corrupted themselves absolutely.

Japan should have banned all UMNO leaders from entering the country.

Doraemon know what anwar did last summer and alert the Japan authority......

Remember last year PKR and PAS made a lot of issue about the compensation that Japanese owed Malaysians due the damaged done by the Japanese during the Second World War. The admiral was behind the allegations and all those falsified documents.