The ploy to rechannel subsidy to development


Not long after Dato Najib took office, he took in the failed Turnaround Manager for MAS, Dato Idris Jala.

Initially, it was thought to appease the Sarawakian before he was given the boot. But no, he was given a prominent role to so-called turnaround the economy with a program called ETP using an outfit called PEMANDU.

Immediately, the Communications graduate from USM masquarading as an oil and gas expert and turnaround specialist did a PR exercise by giving a shock treatment exercise to say government will be bankrupt.

With his expertise acquired from Shell, he displayed a series of presentation to give the simplistic picture of the state of economy. 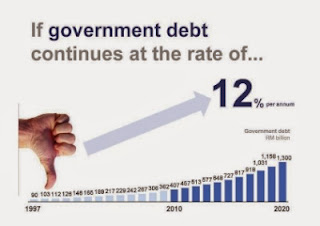 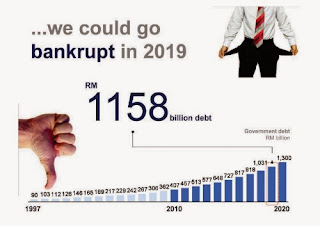 In his presentation, he displayed this cluster graph typical of Boston Consulting Group: 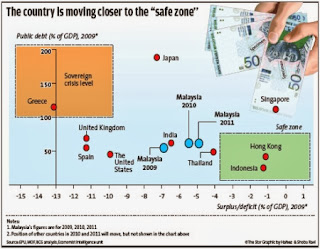 Using the graph, he moved on to say that the solution is to: 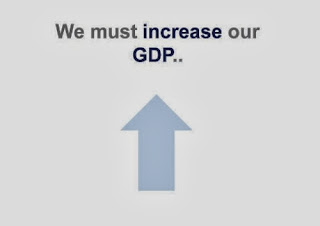 In which he later presented various ideas like NKRA, NKEAs and EPPs.

However, back then when we heard his presentation, we were sceptical because the man couldn't turnaround the revenue of MAS and lied in his last announced profit results.

His idea of turnaround at Shell Bintulu is only the textbook approach of retrenching staff in the thousand without thoroughly understanding the process flow and business issues.

Now it was revealed that Idris Jala is not trained in economics or business but his first degree at USM was communication, thus the label of chief powerpoint officer of PEMANDU.

There were few major flaws in NKRA, NKEA and EPP together with the high income economy he was developing.

By the way, the New Economic Model was about improving efficiency in output in our economic  activities. But, not the ludicrous idea of making income as an exogeneous variable to endogenoeus variable of economic activities and GDP.

Let's leave aside this part. It is too academic and heavy to debunk Idris simplistic world socio-economic order but go into another of Idris's simplistic solution. 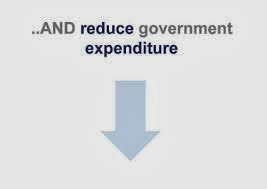 To do that he proposed the neo-liberal proposal as whispered into PM's ears by Dato Omar Ong. 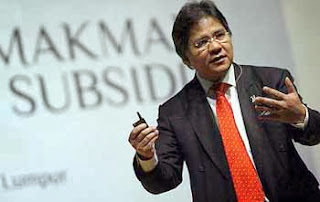 The idea of going aggresively into the neoliberal proposal of rationalisation of subsidy originated from them. It is not so much of Husni as we had criticised before.

When Husni met the press to brief them of an impending fuel hike on the ground of rationalisation of subsidy, one excuse he used was to direct wasteful and unproductive subsidy spending to more productive development spending.

It sounds logical to prioritise to building more roads in Sabah, and schools in the interior of Sarawak.

Perhaps, issuing the 5th telecommunication lesson with ready business from Ministry of Education when existing infrastruture already exist and only needs upgrading for less amount is part of it.  Off course not, it is just us being cynical to Gelagat Anwar blog that is getting ridiculous with the spinned accusation by the day. 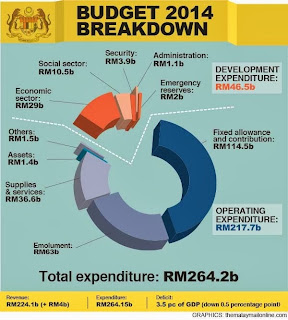 It is great that Bigdog highlighted here that the government's operating expenditure is more than 80% of budget.

What this implies is that government has not been channeling money to development but taking the neoliberal privatisation model which conveniently used PFI with funding from EPF and raised borrowing using government guarantee.

No wonder Idris claimed government was borrowing too much.

Idris conveniently did not raise about government's bloated OPEX. But merely zeroed in on the annual subsidy bill of about RM40 billion currently which takes up about 16% of our RM264 billion budget for 2014. 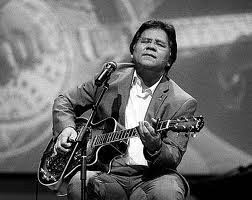 He wanted to sing the blues but the rakyat will be the one to feel the blues.

Whilst, Idris carries on to champion a pro-corporate and pro-MNC economic model which include championing for TPPA. The Malay usually call such people of humble begnning as orang tak sedar asal usul (someone with no conscience of his roots and beginning).

This messed up financial position of government must have been inherited by Najib from Pak Lah's days, but Najib will get the blame.

However Najib is not doing much to address it.

The rakyat could see that Najib announced the asuterity drive in a hurry because tun Dr Mahathir wrote something. This blog had wrote about it since September and October even listing 60 measures to cut wastages and corruption.

The 11 austerity drive is a lame effort and obviously is not thought through. Immediately upon his announcement, our economic Whasapp group was laughing their head off.

Based on budget of about RM200 billion, the austerity drive was estimated to reduce expenditure by 2%. But at RM264 billion for 2014, it is hardly a dent. Not to mention the unrealistic nature of certain measures.

Yet one PMO press officer was going around sending messages to give the 10 day old austerity measures a chance. Did this guy finished his degree before becoming a reporter?

Najib may have inherited this mess but he just made himself in a deeper mess with the jet issue.

No amount of explanation by Dato Shahidan or PMO press release or a character atttack on Dato Kadir Jasin can help the public perception building up that Najib is wasteful and oppulent in his spending of public money.

If bloggers have been skirting the blame to the Punahsihat, how much longer can they do so when Najib is insistent on keeping them all. Din Turtle has an article here posted yesterday. 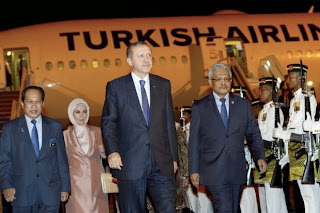 Bigdog highlighted Birish Prime Minister travelling on Virgin Air. Was informed by a walking encyclopaedia aviationist that only the Queen has a private jet albeit a small one and she owns it. [Read Bigdog's series on the private jet issues here, here, here, here and here]

This blog did not criticise Datin Seri Rosmah for use of government jet when the debacle arise. Unless someone allowed and Shahidan claimed it is cabinet approval, why blame her?

She has no power and authority.


This time around no excuses or explanation can convince the rakyat for the fleet of 7 private jet, maintenance bill of RM188 million, use of a luxurious leased replacement for the under repair plane, and not to mention the millions travelling expenses to bring the 20-30 people entourage from PMO at every overseas trip.

Some does not have any purpose or role or even take notes or prepare reports for such trip but merely joy ride.

No answer will be acceptable to the rakyat whose got their purchasing power diminished by 20-30%.

For that matter, publish a picture of Kadir Jasin naked with his alleged mistresses and his bank accounts for that matter. Learn from the Anwar experiance. His message to question wastages is valid and public will accept.

Malaysia is rich as Tun Dr Mahathir said sceptically but we cannot be wasteful. Reiterating our earlier exertion in a past posting.

The annual electrcity bill is RM2.2 million, and water is RM330,000, which comes out to slighty more than about RM200,000 a month. He claimed that Zoo Negara with all the tiger, elephant and badak sumbu has only a water bill of  RM10,000 a month.

Dr Alfred Winsemius, the Dutch economics expert was the man behing the development of Singapore. 1961-1984. The brilliant Lee Kuan Yew with his 14 failed Policies for Singapore did what he was told by the good doctor in putting up a glittering facade. He failed hands down when he neglected the development of human resources. Singapore only gave Dr Winsemius 2 medals of which one was gold and a piece of paper. No multi-billion ringgits consultants of Malaysia for the Republic of Singapore.

It's funny that all these scandals and exposes aren't are because of a strong Opposition but a bloated civil service of 1.4 million people.

So yes, thank you civil servants for leaking all these letters and papers. May you get more bloated!

I wonder whether the leader tacitly agrees with the PEMANDU's neo-liberal policies or whether someone, somewhere is blackmailing him to comply under threat of exposure of a dark personal or family secret.

Sir, how many of us realise that our beloved Malaysia is over-governed.There is one Federal Government and 13 State Governments. We have a huge Cabinet and a bloated bureacracy plus 7 jet planes for the Prime Minister's Office.

Our population is purported to be 27 millions, not much larger than Shanghai or Calcutta.