Regina leak info for evangelical cause 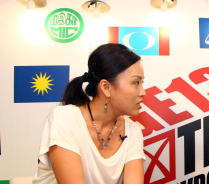 Regina Lee did a manouvre on the Allah name issue through her boss, Khairy Jamaluddin to put the issue back into play. That brought out Perkasa's Secretary General, Tuan Syed Hasan Syed Ali to tick off Khairy for meddling in an area outside his purview. [MI reported here]

Syed Hasan reminded the Pemuda UMNO Chief that he showed more concern for the torched chapel in Kuala Lumour than masjids and suraus desecrated by pig's head and content. He rebuked Khairy's claim that the Allah issue is resolve.

To refresh the memory of many, Syed Hasan vehemently opposed to the 10-point solution initiated or perhaps instructed by PM upon Dato Idris Jala to the point of threatening to withdraw his membership from UMNO. It is unimaginable for a communications graduate pretending to be an oil and gas man, and corporate and government turnaround assigned o address a social dispute.

A little bird alerted that the comments by Khairy was at the initiative of his press secretary, Regina Lee. She manouvred to leak a sensitive information still at cabinet discussion level.

After speaking at the 16th Malaysia Strategic Outlook Conference 2014 in Kuala Lumpur on Thursday, a reporter from The Star asked for Khairy's view on the currently quiet issue on the use of Allah by churches.

Conveniently, Regina's husband, Teh Eng Hock wrote three reports for The Star. He broke "Khairy: Seizure of bibles by Jais is a state issue" and "Explain 10-point solution in detail, Selangor state councillor tells Putrajaya" for Thursday and "Cabinet decides that seizure of Bibles by Jais a state issue" for Friday publication.

That sets off a string of other reports on the same storyline by other media on and off-line. See google here.

It is obvious that Regina knew of the cabinet discussion on the Allah issue and tipped off the husband on cabinet's plan to stick to the 10-point agreement made by Idris Jala. The little bird information indicate Regina Lee has an ulterior motive and interest to reignite the issue.

There may have been discussion mentioning that Islamic matters is the purview of the state but not necessary to pass the buck back to the state religious authority, which is within the control of the evangelist backed DAP and Melayu liberal of PAS and PKR. 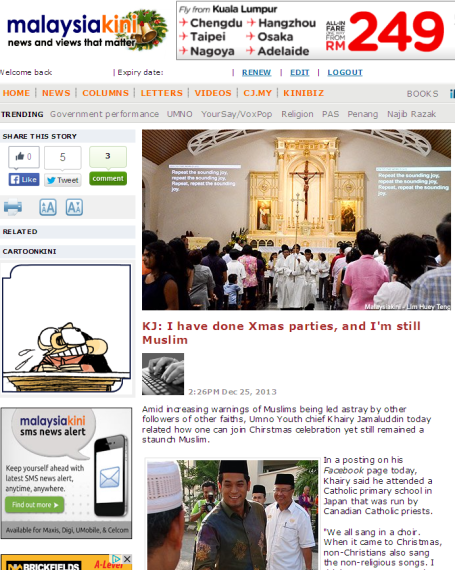 While Khairy is justified to say the 10 point agreement cannot supersede state law, Regina had successfully manipulated his nature to seek attention and bask in glory to her cause. 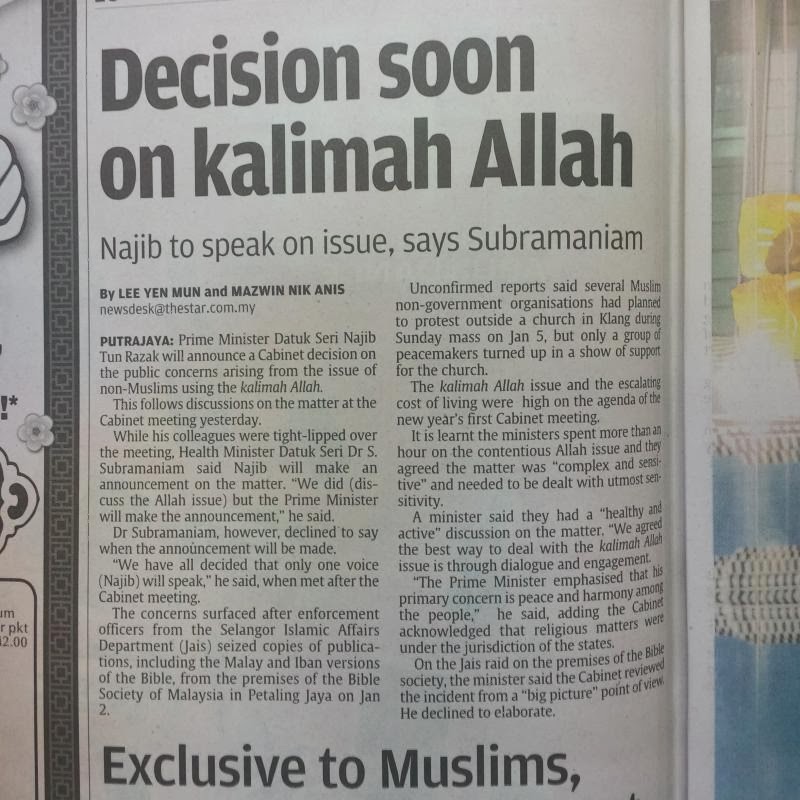 Syed Hassan was justified to tick off Khairy for meddling in the affair of other Ministry and in this case, the issue is under the jurisdiction of the Prime Minister's Department.

Khairy should stick to answering why our sepak takraw team lost to Vietnam and South Korea?

It is the purview of Dato Najib or Dato Gen (R) Jamil Khir to speak with authority on the issue. There should be reason why there is no official announcement coming yet.

Even Dato Subramaniam strangely acknowledged it when for some unexplained reason he too wanted to be the spokesman on Allah issue.

If cabinet intend to stick to the 10-point agreement, it would seem cabinet succumbed to the church argument to use the 10 point agreement as their basis. The church had initially claimed the seized bible was meant for Sabah and Sarawak.

However, it had the name of Allah used, thus state law and court order supersede the 10 point agreement. See the seized bible below: 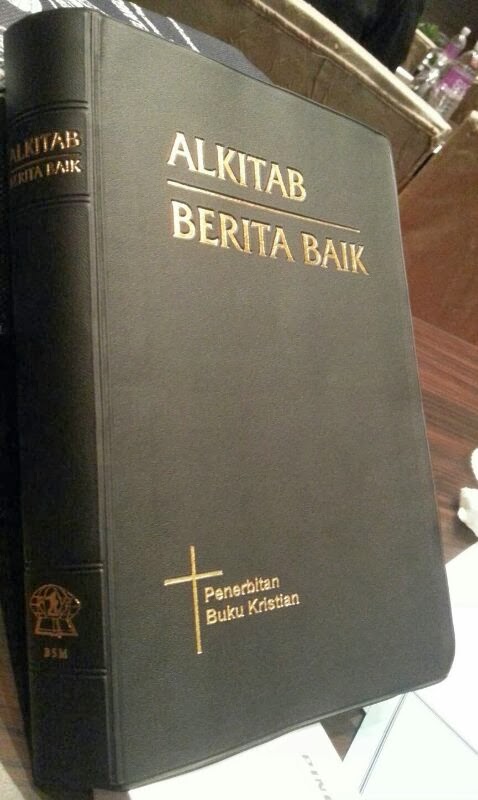 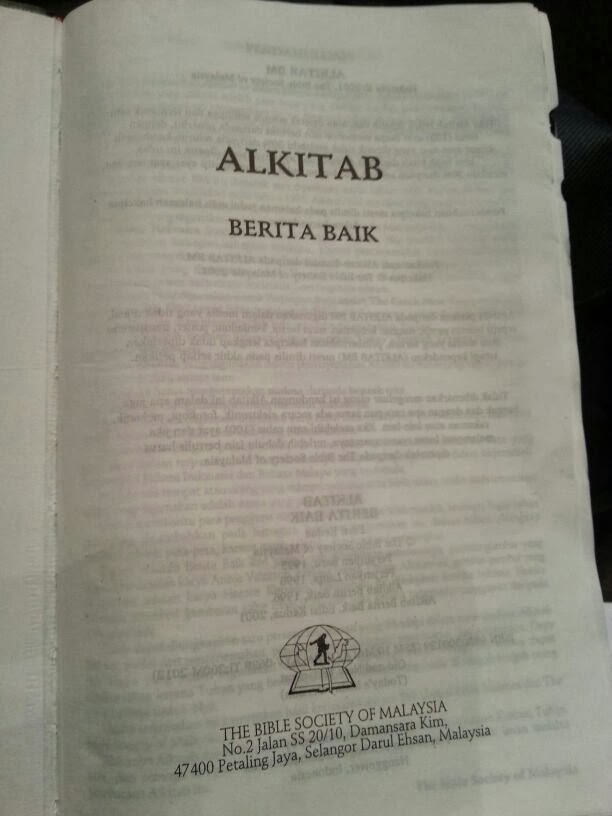 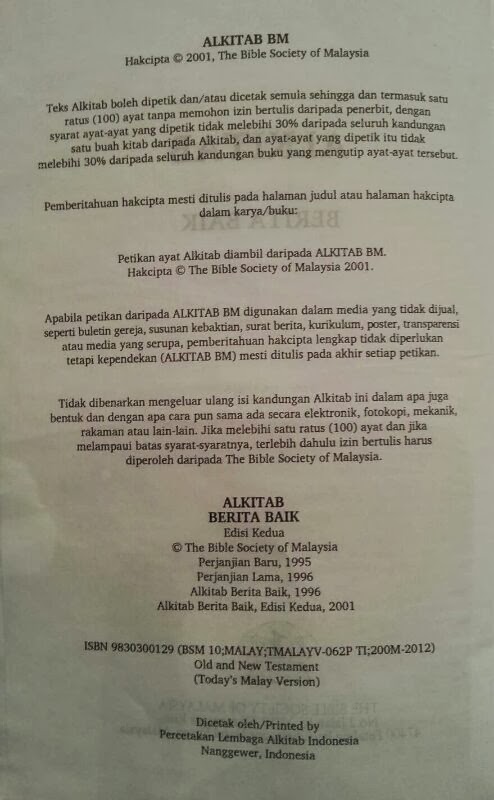 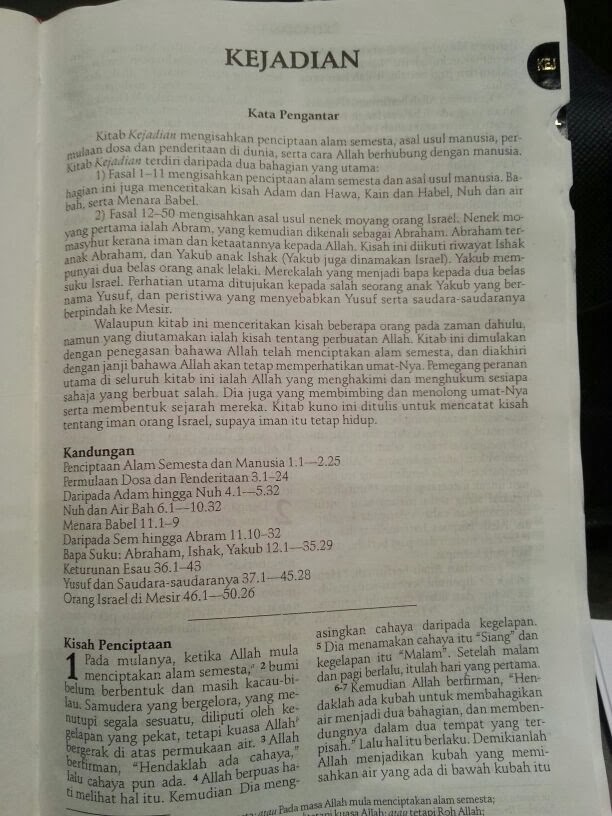 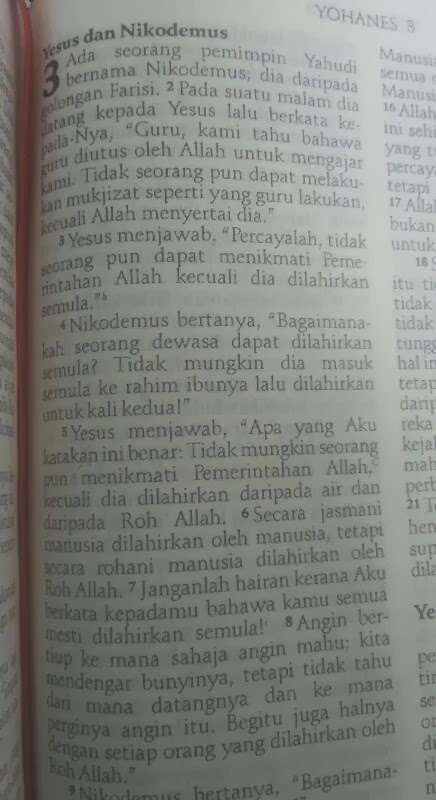 The heat of the issue on the seizure of bibles by JAIS and Dato' Marina Mahathir's ridiculous circus stunt made certain Christian group bolder to insist on distributing the Malay bibles with Allah name in Selangor too. 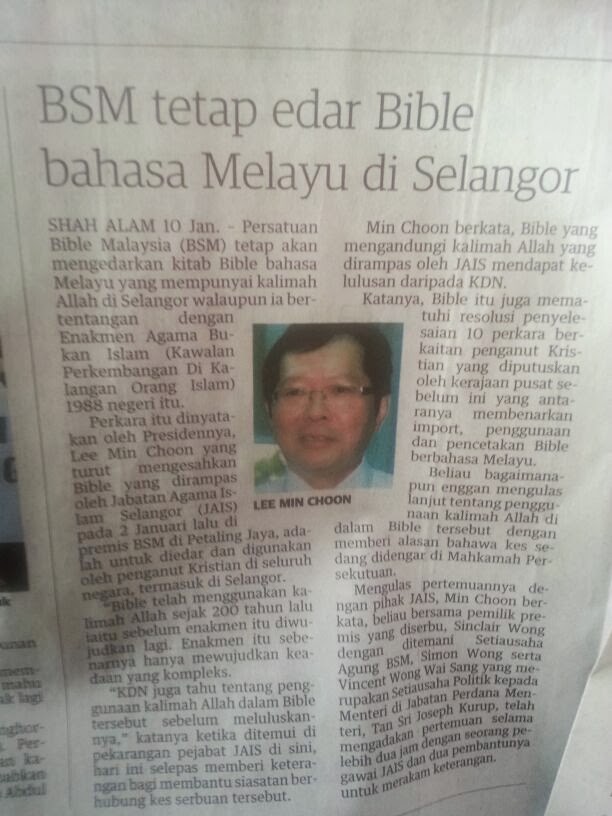 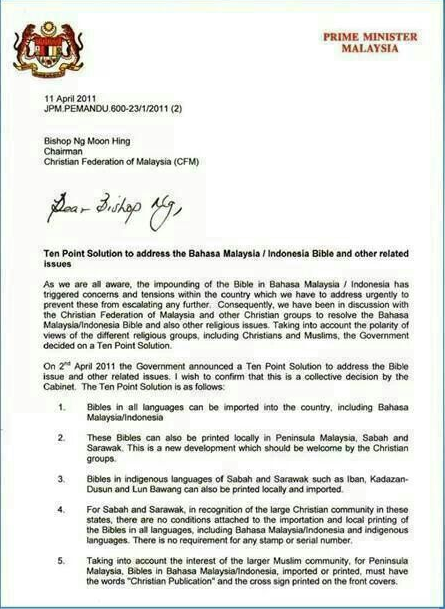 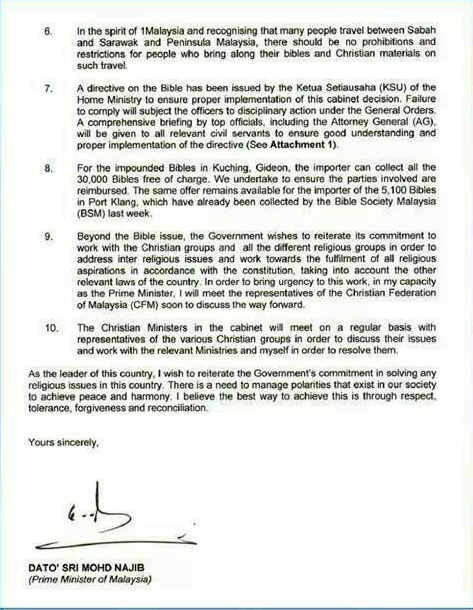 The agreement is as per the sloppy written letter above which used PEMANDU reference and Najib's name was merely written as Dato Sri Najib. Totally unbecoming for someone with corporate CEO experiance and degree in communications.

The letter basically allowed for Bibles in Malay to be used, printed and distributed all over Malaysia. However there is a limitation in which Bible in Malay or other native language using Allah as God will be subjected to court order and religious state laws.

Najib may have not properly read the letter and understood the implication of Idris Jala's drafted letter. It did not mention Malay bible is only restricted for Sabah and Sarawak or Allah name be allowed in Sabah and Sarawak. Idris Jala had insidiously kept it silent and Najib "chimply" signed. 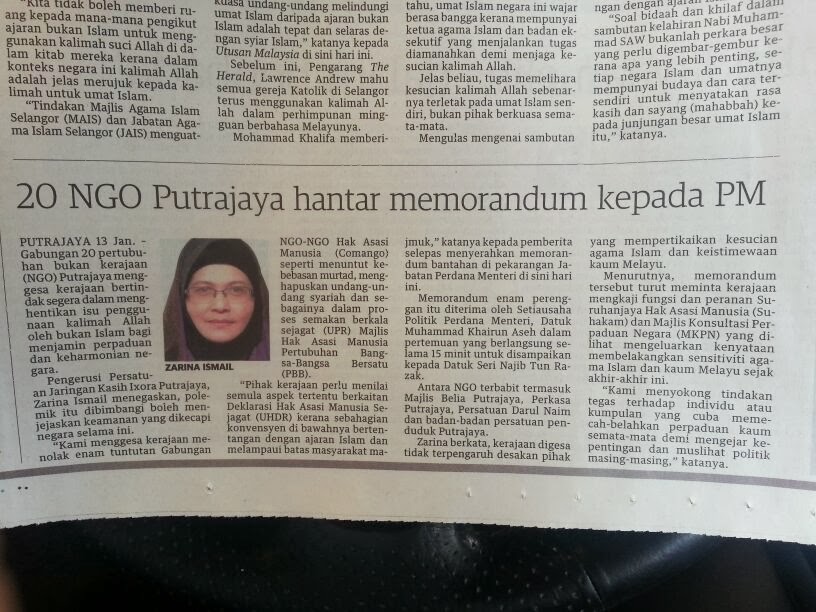 Few had complimented Khairy for mentioning that the 10 point agreement should not supercede state law and court orders but that only came about after much complain and feedback from Muslim NGOs.

One source with a certain religious authority informed that Dato Najib had consulted reknown Islamic scholar, Professor Dato Syed Naguib Al Attas on the Allah issue and he clarified to the Professor that the 10 point agreement should not supercede state religious enactment. 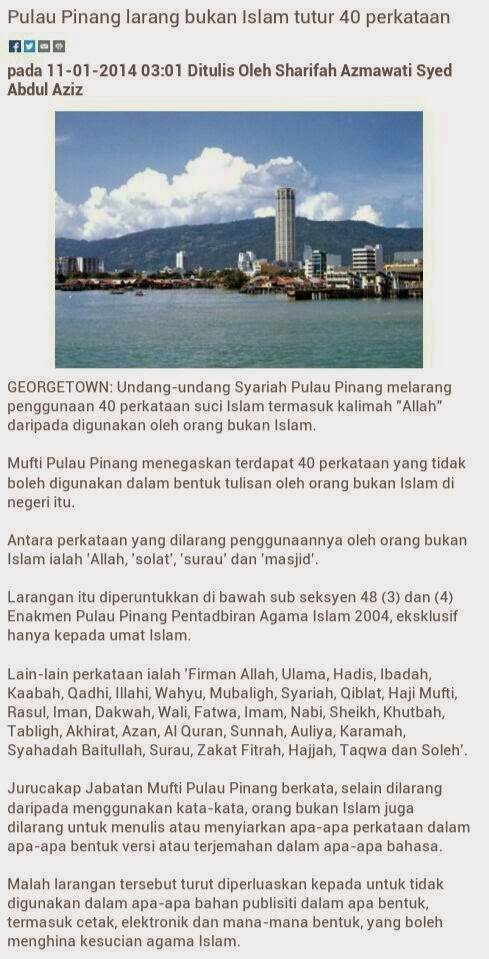 For that matter Penang had acknowledged that position. In 2010, the Penang state assembly passed an enactment to bar of the use of Allah and altogether 40 Islamic terms by other religion. Yet Guan Eng had instigated the Christians on Christmas Day 2012 on the use of Allah for churches. SInce exposed, he has conveniently been keeping quiet.

One possible reason Najib did not make any official position is the impending Federal Court appeal by the Christian group which the court date will be on March 5th. Tens of thousand or if not hundred thousand of Islamic NGO supporters is expected to be at Putrajaya's Court.

Regina's manouvre will incite restlessness on the part of Christians and Muslims. It serve to maintain the momentum of the Allah issue towards the Sarawak state election in which DAP is openly inciting religious sentiment. DAP experimented the use of religious issue in the Sibu by-election in 2011.

Their plan is to gain ground on the Barisan Nasional fortress in the interiors by inciting the Muslims in Peninsular for the Sarawakian Christians to response electorally.

With secret out, there will be pressure on the Selangor religious authority. JAIS have not been getting the support from the PAS politicians despite PAS state exco member on religious matter acknowledge JAIS had done their work according to the procedure and law.


The video above explains.

Dr Mahathir was right to wonder as to why do they still do not understand Malay. Allah is not god in Malay but it is tuhan. The Indonesian version of the Bible was intentionally translated wrongly to evangelise the Muslims.

For 500 years of European colonisation, they had never been succcessful to evangelise the Malays. [Read Agendadaily here.] The contextualisation approach to emulate the Islamic practise and culture as in Indonesia have been successful formula and it is currently being applied on Muslim Malays here. 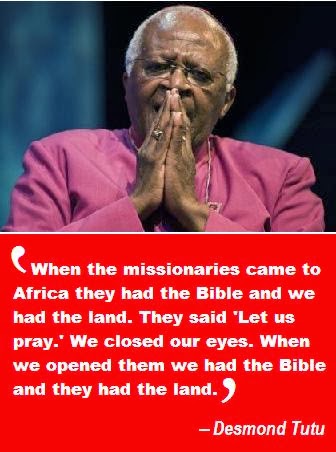 The Christian evangelist not only wanted to deviate the Muslims, but there is more greed at stake behind DAP's evangelical manouvre. It replicated what Reverand Desmond Tutut said once.

As for pro-evangelical Regina, it proves the earlier allegation that she will leak information forsake of her political agenda.
at 1/25/2014 02:59:00 PM

Once you open your Eyes, Al-Kitab is blong to you & The land belong to Regina/ Evangelist..

They all fake..No Real one..
How many of you never been cheated by them?

For more information, I refer you to www.helenangwordpress.com with all the details on the activities of these Hainanese swallows and ducks from Hainan Island, a'la Singapore !

That's the problem when you hired somebody that you knew his/her colors... smart or just mere stupid!

Even PM Najib now in dilemmas with his choices...

Najib Must Go, And Do Not Make A U-Turn, For "Blindly" Signed The 10 Points Solution Prepared And Drafted By Chief "Driver", Idris Jala, The Christian!

According to you, a voice of sinner, it's everybody fault except UMNO.

The truth is that the word A has been used for the past century without creating any controversy.

However for the greed of power, UMNO is willing to burn down the country by plotting all kinds of evil modus operandi to sow the seeds of hatred and hostility in its objective to divide as well as to pit peace loving Malaysians on one another by race, class and religion.

Discuss the subject and not your rhetorical bullshit.

U wanna talk of corruption talk please of the equally corrupt giver of bribes ... chinky businessmen and criminals.

The major receivers of corruptions are not just politicians but also decision making government servants.

Anonymous, I can only agree with your comments based on my life-long experiences. The givers are just as culpable. But to give a balance view, the corruption in the Private Sector is not only insidious, it is endemic since 1947 !

Anonymous. All these fellows learnt the tricks of the trade during the Japanese Occupation and applied with great success after Merdeka in 1957. What the Bloggers are debating now is ohly the tip of an iceberg of 21st Century Malaysia.

As usual, you are just being brainwashed by UMNO propaganda of lies, deceit and disinformation. If you care to think a bit deeper, why are the countries ruled by the Chinese that are absolutely clean eg. Singapore, Hong Kong and Taiwan. Yes, China is corrupted but definitely they are cleaning up their acts now when high flyer politicians were sentenced to death for corruption. In Malaysia, which minister has ever been caught for corruption so far.

If UMNO wanted to take Indonesia and Bangladesh as mirror for the case of serupa bangsa, the result can only confirmed that all of them are corrupted to the core.

Pity our civil servants, police and the army that they got pittance gaji as compared to the billions stolen by UMNOputras. Only in Malaysia, can the sons of every PM and ex-PMs are all billionaires as in the case for the old mamak, Pak Lah and Kangkung whilst the rural Malay folks are still struggling just to find enough to eat.

Discussion started by 2.49 is not in line with Subject. No more comments on this.