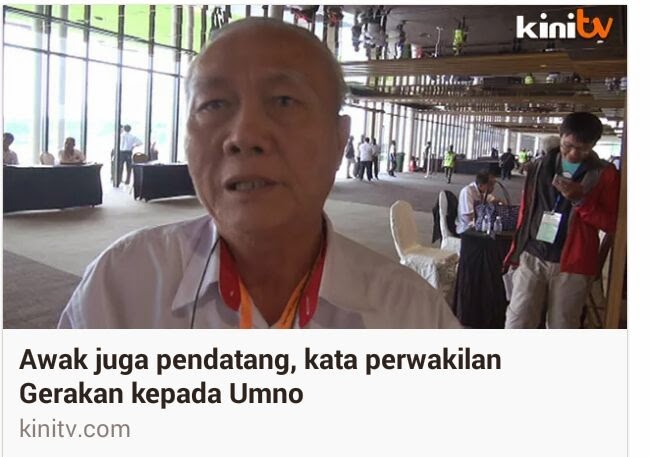 Before the AGM, President Dato Mah Siew Keong's tone setting statement was for moderation as the new crying call for Gerakan's comeback. Mah acknowledged that after two general elections, Gerakan was reduced to a nominal presence in Parliament and State Assemblies.

For that matter, the one that used to utter the same remark in Parliament, the Ketua Wanita Dato Tan Lian Ho had focused her speech on the fanaticism and radical politics of DAP.

Basically, the Gerakan AGM should have been the platform for Gerakan politicians to use to lambast DAP Penang at a time when the Penang voters are slowly begining to realise the ugly head and incompetence of Lim Guan Eng.

It is certainly not the time to attack fellow BN party members or their voters. MCA and Gerakan's existing presence in Parliament and State Assemblies come at the camarederie spirit and willingness of UMNO to giveaway Malay majority seats for MCA and Gerakan to contest and remain relevent. 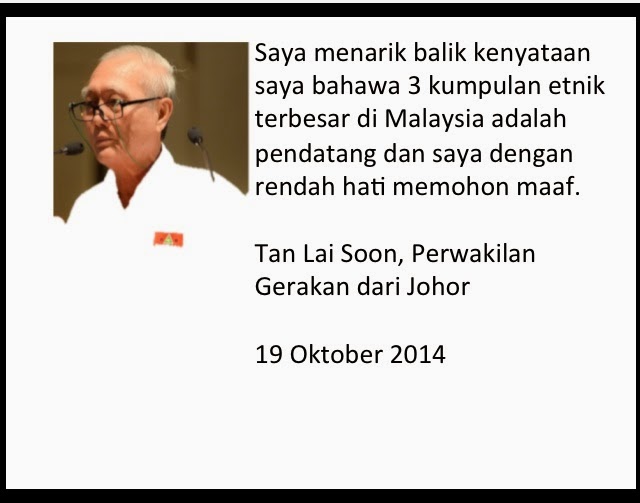 Tan Lai Soon made a statement to retract his statement yesterday. But the damage is done.

Already some Malays felt the apology is not sincere because an old timer politician like Tan cannot claim ignorance.

Some remain slighted and see that it was an intentional act. Although there was an apology, it was a ploy to put the argument into play to put into the general Chinese psyche that only orang asli are Bumiputera.

That has seditous implication to indirectly question article 153 of the Federal Constitution.

The opposition could exploit it or maybe they would not. However, the argument presented by Tan Lai Soon echoes the same argument uttered by DAP, and PKR.

At a time BN should be uniting, working and be seen together instead of working as three seperate entities under a Kapitan Cina, Kapitan Keling and Malay artisticrat as in the colonial days, it only brings back suspicion on the Chinese majority component parties of Peninsular Malaysia.

Believe me, that view have been heard uttered and Gerakan's pre-May 13 1969 history as a feisty opposition was recalled. Some believed Gerakan has not shed that past especially since Pemuda Gerakan was at time on a combative mode and calls to leave BN was heard.

Some may even view it as a sabotage from within Gerakan to assist the trouble brewing DAP. MCA is still grappling with the conscience that their own members voted for DAP.

Now, Mah have committed to be firm on any members taking extremist views. That puts pressure on him to deal with the wayward delegate. A political polemic could arise as there will be voices demanding on UMNO to act the same.

In this country, ONLY UMNO can issue statement which is racist in nature like the vernacular school argument. Only UMNO can be racist but not others.

Sedition act there be. Intentionally for this ol' rug.

DAP's silence? I cannot wait to see what kind of label will the Star give to Tan, what will WCW write about Tan and what will Saifuddin Abdullah tweet about Tan. GMM should use Tan's remarks as part of their moderation campaign. #Divisive Views, Dangerous Ideas.

Gerakan is irrelevant. Mca is irrelevant. If dap can at least shed its chinese only image and bring in more and relevant indians to the fore, than indian based party will also become irrelevant. If dap goes one step further and bring malays to the fore while shedding its "hurtful feelings of tongkang riders" and recruiting malays, umno would be doomed. If dap goes for a one school policy, umno would be doomed. If dap goes for english as medium, professional malays will flock. Dap is in the driving seat. All it takes is for there to be an equal malay on par with lge and umno will slowly die. About the malays as pendatang, that is a non issue. Anyone who cares to read up would know otherwise

To be fair, what he said was true - it was just a matter of timing. The Malay "datang" earlier due to the extensive trade across the Nusantara archipelago while Chinese and Indians were brought here as part of Britain's policy of colonial capitalism.

You do have to bear in mind that the Malay "pendatangs" practiced Hinduism & Buddhism centuries before the coming of Islam.

Sigh. It's pretty hard to debate when the whole lot of us Malaysians don't read.

this is what happened when the govt (which is UMNO) allowed;

what did they give back in return?

1.Teach their children to hate anything about malay and bumiputra
2.manipulate and twisted the fact about the Malay origin

what action should we take?

1.Ban all chinese school
2.Encourage all pendatang to migrate
3.Send them to BTN for re education.

and by the way why should we the bumiputra, fear if ever all the pendatang migrate elsewhere?

come on? what else?

Gerakan is dead long time ago and will never make a comeback. This racist statement will only deepend the grave of Gerakan.

Sorry, there is no free unmoderated comments here. Its my turf ...

ask gerakan to close down then manage their universiti and mca also same, ha ha ha, umno got universiti to manage or not if have then same lah all

What Tan said is a fact so accept it and be humble if one ethnic community is a pendatang[immigrant] so are all other communities.M too and formulate policies that is not biased....period.